Ominous Signs of Systematic Plan By Iran’s Government to Blame Bahais for The Protests. 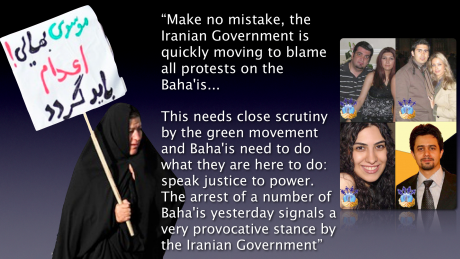 The Iranian government, desperate in face of nationwide popular protests which are increasingly weakening its pillars, is resorting to an old worn out scapegoat, by blaming the Bahais as instigators of mass popular protests.

Today homes of more Bahais were raided and arrests were made; an ominous sign that The Iranian government, who has imprisoned many Bahais including the “Yaran” the Seven Bahai Community leaders for the last 2 years without Trial or any shred of credible evidence against them, is desperately trying to manufacture evidence against the innocent community.

“Make no mistake, the Iranian Government is quickly moving to blame all protests on the Baha’is…This needs close scrutiny by the green movement and Baha’is need to do what they are here to do: speak justice to power. The arrest of a number of Baha’is yesterday signals a very provocative stance by the Iranian Government.”

Below is a translation from Farsi of the Javan newspaper story

“On ‘Ashura, the protectors of the Musawi camp did not have the decency to abstain from desecrating even the most sacred of religious sanctities. By tearing up copies of the Qur’an on Enqelab Street in front of those mourning the martyrdom of Imam Husayn, they have exposed another side of their contempt for religion.

Confirming the above report, an expert in matters of security told Javan Online: “The actions of the Musawi Camp in desecrating religious sanctities is nothing new. In fact, this began happening when a Baha’i branch in the staff of this candidate was formed during the days leading up to the election.”

He added: “This sect has long been planning to attack the religious sanctities of the people on ‘Ashura but since they can never secure the protection of the masses, they will never be succeed.”