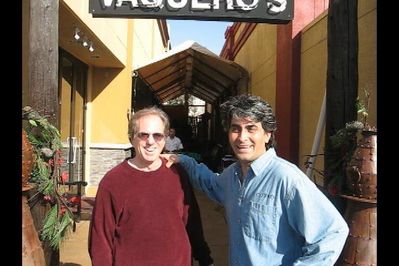 If you asked me who the nicest public personality I know is, I would answer without hestation, the singer Rushid Safarzadeh.

Two years ago I hired Rushid on the recommendation of a mutual friend to come and sing at my annual Norooz Party. When I went to sign him up, we ended up talking for two hours at Bijan’s Cafe about Iran. He told me he hadn’t been back in 30 years and hoped he could go back one more time to sit and drink tea in Darband at which point I whipped out my lap top and showed him a picture of me in 1975 doing exactly that.  From that point on we were destined for friendship.Rushid made my party for 150 people come alive as did the dancers he recommended for me to hire. He and his band won over our hearts. He has also generously assisted me in getting air time on satellite TV to promote my book. Back after the Bam earthquake in 2003, he was part of a money raising rock concert that raised several million dollars for the earthquake victims.

He has sung at the Seezda Bidar festival in Vasona Park many years in a row and the Mehregan Festival in Orange County. His charm and kindness radiate from him and make everyone around him feel good…if you ever wonder who to hire for a singer for your event, he’s your man.