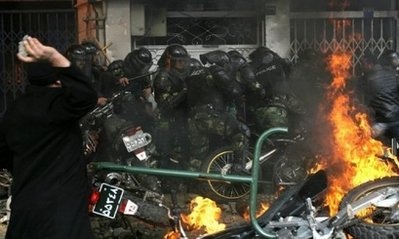 At year’s end, pundits are prone to partake in New Year’s predictions. It is a pursuit often done lightheartedly. But every so often facts align themselves in ways that require genuine assessment.

And a willingness to make a prediction that may be so bold that it cannot later be hemmed or hawed or rationalized away.

That gives a pundit an advantage over those other folks who prognosticate for a living at the CIA. They have so much intelligence at their fingertips and under their fedoras that they are very good at prophecies of geopolitical nuance – but not at sensing truly seismographic regime changes that may be at hand. Especially changes in dictatorial regimes that seem too powerful to be undone by unarmed forces.

In past eras, I was fortunate to be unencumbered by vast intelligence resources – which may be why I was able to predict two climactic changes that surprised those far more skilled at the intelligence game.

First, in the last days of 1988, as a panelist on CNN’s year end show, I evoked much chortling from some colleagues when I declared: “The Berlin Wall will come down in 1989. Write it down. It’ll happen.” (It did.)

And, in a December, 1990 column, I predicted this for 1991: “The Fall of One Nobel Laureate: Mikhail Gorbachev, no longer able to keep together his economically crumbling and nationalistically clamoring union, will resign. A KGB/military hard-liner will rule … Moscow’s new, repressive communist regime will collapse in just a few months. The Soviet Union will break into a confederation of nation-states, sharing a military but little else. The world will worry about who controls the nuclear weapons.” (He did. It did. We did.)

I will not bore you by citing other predictions made over the years that remain as yet unconfirmed. But I wanted to remind frantic CIA Googlers of those two credentials in order to focus attention on what is happening in Iran.

On Dec. 21, a funeral procession in Qum for Grand Ayatollah Hossein Ali Montazeri, an outspoken critic of the iron-fisted Islamic regime, was transformed into a massive antigovernment rally. The New York Times reported that tens of thousands of his supporters denounced President Mahmoud Ahmadinejad and the Islamic rulers who pull his strings.

“Our shame, our shame, our idiot leader!” they chanted. And “Dictator, this is your last message: The people of Iran are rising!” Iran has a large, educated middle class that has a broad cultural affinity with the West. Iran’s defiance of United Nations nuclear inspectors is leading to new sanctions for a nation already reeling from economic woes.

Ahmadinejad remains in power only because Supreme Leader Ayatollah Ai Khamenei swept aside evidence of widespread voting fraud in June. After thousands defied Khamenei’s ban on protests, leading to mass arrests, I wrote: “The absolute moral authority of Iran’s supreme leader has unraveled with the swiftness and absolute irreversibility of a turban caught in a ceiling fan … Iran will never again be the same.” This week’s defiant protests proved that.

But perhaps most important was a little-noticed Obama administration crackdown this month: The Justice Department, pursuing its crackdown on Europe’s most famous banks for secret ties with Iran, won a half-billion dollar settlement from Credit Suisse Group which used code words and other means to hide transactions with Iran that violated U.S. Sanctions. Other European institutions are being investigated.

That crackdown will likely cause big problems for Iran’s financial and business elite, which will cascade down upon the middle class like new fuel tossed on old flames of disgust with the ruling regime. Iran’s Supreme Leader rules not by faith but by fear – and fists.

It is only a matter of time before there will be a new Iran, governed (but not ruled) by leaders who may be secular or Islamic, but will be genuinely democratic and eager to pursue a pro-West path to prosperity.

America’s job is to convince the new Iran that the fastest track to prosperity can be powered by a world of economic partnerships – but never by a nuclear bomb.