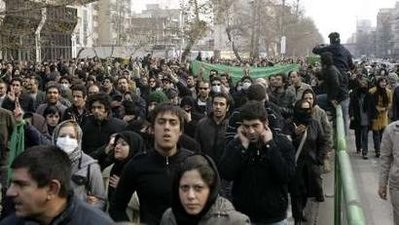 The Islamic Republic is in dire straits, and deservedly so.

Years of economic mismanagement (exacerbated by three rounds of UN-imposed sanctions), political repression, rampant corruption, and international adventurism seem to have taken their toll on the regime.

A good indication of the regime’s increasing vulnerability to external pressure was the inability of the hardliners to prevent, just a few days ago, massive opposition protests from taking place on the streets of Tehran and other major Iranian cities during the Ashura ceremonies.

In a sense, it may be said that what started as an election dispute in Iran more than six months ago has effectively turned into a grassroots democratization movement the reverberations of which have shaken the Islamic Republic to the core.

There is no doubt that the proper management and thus escalation of this indigenous democratization movement can eventually force the regime to either succumb to the demands of the opposition or simply collapse, thereby facilitating the country’s transition to democracy.

Having said that, there are a few caveats of which those participating in the movement must be aware in order to expedite the democratic process in Iran.

First, it would be wise for those participating in what is now known as the Green Movement to pursue Iran’s transition to democracy through grassroots activism of a non-violent nature.

In other words, the hardliners in charge of the regime must fail in their sinister attempts to promote violence within the movement, for violent behavior will prevent many an ordinary citizen from continued participation in the movement.

Second, it would benefit the movement tremendously if its participants could focus on extending the ideological reach of the movement through elaboration of movement values.

It goes without saying that proper sloganeering is of utmost importance at this stage of the democratization process, for slogans that are reflective of movement values rather than feelings or emotions have the most capacity to attract wary individuals to the movement.

Third, it would be wise for those interested in the Green Movement to constantly remind themselves that the transition to democracy, once initiated, is a slow yet sure process, provided proper attempts are made to increase the movement’s resources (e.g., networks, sub-networks, channels of access to potential allies, etc.) over time.

Fourth, advocates of the Green Movement must take notice of the fact that while the Constitution of the Islamic Republic is not conducive to any sort of a democratic future in Iran, it could serve as a tactical instrument for limiting the hardliners’ ability to use violence as a means of continued repression.

Fifth, it would be wise for the leaders of the movement to appreciate the historical significance of the movement with which they are associated by not offering or attempting to reconcile with the movement’s enemies.

After all, internationally revered democratic movements like the one Iran is witnessing at the present are considered a rarity in a region plagued by centuries-old authoritarian structures.

What is more, for the leaders of the Green Movement to show weakness in the face of thuggish behavior by the regime runs the risk of empowering democracy’s enemies throughout the country (as well as the entire region) and thus facilitating a more massive crackdown on individuals and organizations linked to the movement.

Here, it would be beneficial to all those reformists who may be preoccupied with the thought of preserving the regime at the expense of the movement to recall the late Grand Ayatollah Hossein Ali Montazeri’s recent pronouncement that the Islamic Republic is neither Islamic nor republican in nature, and that its preservation at the expense of Islam would be an evil act.

Finally, it is expected of those active in the Green Movement to start setting the stage for nationwide general strikes as a way of crippling the regime further.

True, the combination of motivational statements by Mir-Hossein Mousavi, Mehdi Karroubi, and Mohammad Khatami and occasional outbursts of public anger on the streets of Tehran and other major Iranian cities has done a good job, so far, of keeping the movement alive and moving it forward.

This, however, cannot remain the case for long, since grassroots movements of a spontaneous nature have a tendency to lack continuity over time due to reasons beyond the scope of this brief essay.