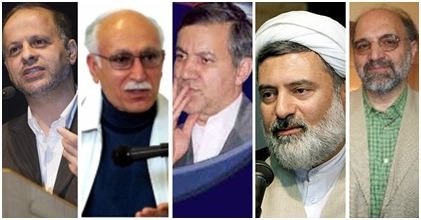 The best statement that has come out of this uprising that is slowly but surely turning into a revolution is the ‘’ (original Persian text), released by five expatriate intellectuals (Abdolkarim Soroush, Akbar Ganji, Mohsen Kadivar, Abdolali Bazargan, and Ataollah Mohajerani). Since the imposition of Hejab on women shortly after the Revolution of 1979, I have supported and hoped for a regime change in Iran. I reluctantly supported Mousavi just before the elections because I was impressed by the way his campaign seemed to be hi-jacked by his mostly female and young constituents. I told myself that anyone who can bring so many people out on the streets chanting the desires of my heart, such as “Hejab entekhabi hagheh zani Irani” (choice in hejab/ every woman’s right), deserved my support.

I remember discussing the possibility of fraud (which was so likely that people were chanting about it prior to Election Day on June 12th), coming to the conclusion that if it did happen then people would take to the streets and we could finally get my wished for but abandoned desire for regime change in Iran. I later saw a clip of Rafsanjani’s wife on Election Day, leaving the polls near her house where she answers the question, “what if there is fraud in the elections?” with a firm, “mardom berizan too khaiboonaa!” (People should take to the streets). People did take to the streets by the millions soon after the audaciously distorted in favor of Ahmadinejad results were announced.

Since then, us Iranians living abroad have all been following the events unfolding in Iran with different degrees of interest and activism. Many of us felt that we have a moral responsibility to disseminate news and broadcast the cause of what came to be known as the Green movement and took to it with the same determination from afar as those in Iran who kept returning to the streets risking beatings, arrest or death. From the first killings at the hands of government forces this movement that began as a protest against election results turned radical.

Those of us who wanted bloodless, gradual change realized as time passed that it would become more and more a lost ideal. Many abhorred this regime but hoped that perhaps Khamenei, the Supreme Leader, had seen the light and wanted to allow some normalization and openness in Iranian society. Even though we had seen that under Khatami, the reformist president that won in a landslide in 1997, promising a more open society and a more tolerant Islam, change was slow and stifled, we still hoped that this time around Khamenei would see the need to change and allow it to happen. Well that did not ensue. Khamenei promised to crack down on protestors and blamed the west for inciting the demonstrations. The protest movement went from asking, “Where is my vote” to chanting “death to dictator.”

The enthusiasm of those of us active in the movement from abroad was fueled by the protesters that seemed to keep coming back in the streets despite killings, tortures, arrests and threats. There did not seem to be much leadership. Mousavi issued statements that were much more tepid than his constituents on the streets; Karoubi became the beloved mentor of the struggle with his presence in rallies and his championing of the prisoners who came out of jail reporting rape, torture and gross abuses. The international reaction to the struggle too left much to be desired. Obama was hell-bent on pushing his doctrine of ‘negotiating with the enemy’ and seemed hesitant to passionately support the people’s struggle in Iran. He did make statements and had his reasons but the people in Iran expected more from the US who had for thirty years unabashedly supported regime change. To many of us it seemed that our struggle had fallen in the cracks of a change in administrations. There was a cultural change in Washington from one administration to the next that was probably more blatant than any in recent history and the obsession of the new administration to avoid the mistakes of the former administration seemed to sacrifice any inclination to help or even show real concern for the protesters in Iran.

Negotiations of US and 5 +1 with Iran failed miserably as those of us who knew this government better had predicted. On Student Day, 16th Azay/Dec.7th, we saw the protests take a more radical turn first in the Universities. It seemed like after months of frustrations marked by continued arrests and abuses the anti-regime sentiment of the protesters had come out of the closet. We heard protesters chant ‘marg bar khamenei’ (death to Khamenei) and “marg bar Jomhourieh Islami” (death to Islamic Republic) loud and clear and on a large scale for the first time. Many were left wondering where this movement would go. The death of Ayatollah Montazeri, the dissident Grand Ayatollah who had opposed Khamenei and who had claimed that Iran was neither Islamic nor a Republic gave the protesters a new cover to demonstrate. The seventh day of his death (a very important landmark in the elaborate Shiite mourning ceremonies) miraculously coincided with Ashura, that most important day in the Shiite calendar where we still mourn the martyrdom of Imam Hussein. Hussein who holds the highest place in Shiite hagiography was killed at the hands of the brutal usurper and tyrant Yazid. Khamenei became the new Yazid and Mousavi whose first name Hussein was already chanted in the streets of Tehran or rather the movement that had made him leader, became the new Hussein.

According to the government eight people died on Ashura. We saw video clips of protesters attacking security forces and for the first time we saw the government thugs scared. It seemed like the protesters who had been mostly peaceful up till then acted with a new anger: they had shed their fear. Where as before they chanted, “na tarsin, na tarsin, ma hameh ba ham hastim,” (have no fear, have no fear, we are all together now they chanted, “betarsin, betarsin, ma hameh baham hastim.” (be afraid, be afraid we are all together). The regime seemed scared and out of control. They had spilled blood on Ashura a day or ‘the’ day of mourning and it seemed that this time they did it out of fear not calculated terrorism.

Now we have reached a place in the struggle where some people are calling for a toning down so as to avoid violence which the regime seems to possess in abundance. Some, on the other hand, are accusing those putting on the breaks as collaborators who have always stood in the way of regime change. They cite with some justification, the failure of Khatami to side with the students on 18th Tir 1998, University uprising, as proof that ‘reformist’ coming from the bosom of the theocratic establishment act as an obstacle to the regime change that the people really want. Just to complicate matters fringe groups such as the monarchists or the MKO or a whole myriad of leftists groups all want to push their own schemes some going as far as doctoring the news coming out of Iran to further their personal or ideological agendas.

So what is to be done? How do we move forward to help bring about democracy, which everyone seems to want, in Iran. We have to come up with a set of demands that are broad enough to include all the disgruntled factions who want to help the popular yet still largely middle class struggle in Iran. We have to unite or we will not be strong enough against a regime which all agree will not hesitate to have a blood bath to save itself. We have to agree to one set of demands that can unite us in asking the international community for help.

Many believe what the student leader, Majid Tavakoli, said in his speech on Student Day right before his arrest, “a simple resignation is no longer enough.” Many want an end to clerical rule and Velayateh faghih (Supreme Leadership with holy mandate). Many are afraid of another revolution that is bloody and fails to bring about democracy. Many are mothers like me who feel unjustified in calling for a revolution when they would not let their own children out in those streets.

That is why whether we want a revolution and regime change or are still holding on to the idea of gradual reform we have to agree on a set of demands that unite us so that with one voice we can achieve at least the minimum: an end to tyrannical rule!

The of the five intellectuals should be embraced because they provide the democratic framework within which we can debate the future of our beloved Iran. They ask for re-election with independent oversight, they ask for freedom of the press and assembly, they ask for justice for the victims of the uprising. If these demands are met then I am convinced that we will realize our thirty year old dream of democracy. The demands are largely rhetorical no one believes that they will be granted however their power does not lie in their practicality but rather in the fact that they can unite us under a wish list! Give us those demands and surely we will change the regime I say! This is why I want to make a call for unity, not that I possess any political weight but as an Iranian mother who has never belonged to any political organization or party and who is desperately thirsty for her children to see a free Iran. Everyone whether Monarchist, MKO, left, center or right, reformist or revolutionary should unite under the lucid democratic demands set forth by the five expatriate intellectuals!