The Center of the Universe 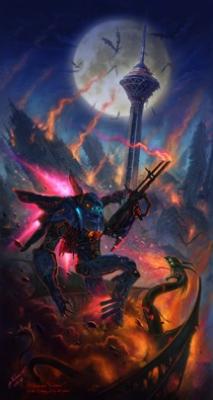 “Iran cannot yet decide whether it is more Iranian or Moslem. Future Iranians need to cope with this dichotomy. Perhaps the reemergence of some degree of the nationalist, pre-Islamic legacy will moderate Iran’s more zealous Shi’ite side.”

The future of Iran as we know it is in flux, this is critical time for Iranians to exert the most influence on what Iran of tomorrow will look and feel like. Understanding ourselves, our history, ideas and ideals will help us make better sense of the deluge of news, information, propaganda and emotions coming at us, and temper our views and responses.

“Iran is easy to swallow but hard to digest”, writes Graham Fuller of Rand in his 1991 book with same title as this article, subtitled ‘The Geopolitics of Iran’. Iran cannot yet decide whether it is more Iranian or Moslem. We see this dichotomy in the Green movement, in daily course of Iranian life, and in our conversations about events and the future. Perhaps looking at Iran and Iranians from outside in can shed light as we struggle for a democratic Iran:

As proud bearers of an ancient culture, many Iranians nurture deep feelings of superiority toward their neighbors that border on cultural arrogance. This syndrome is also recognizable in other states that can demonstrate unbroken cultural and political continuity directly back to ancient and great civilizations, such as India and China.

The extraordinary continuity of Iranian history and sophisticated civilization has provided Iran with a multifaceted and tangled national experience and the legacy of a particularly rich and complex national culture. But Persian culture also betrays a profound schizophrenia, born alternatively of an innate sense of superiority stemming from a magnificent imperial past and rich culture, and a nagging sense of inferiority and even insecurity derived from Iran’s experience of abject conquest and foreign domination at the hands of Greeks, Arabs, Turks of all kinds, Afghans, Russians, and Western powers.

The Persian world is baroque, on the one hand revealing a sense for the extravagant the has produced a magnificent artistic heritage; on the other, it has evolved a subtle, labyrinthine approach to politics that reflects historical insecurities of life under fickleness and sudden death of absolute monarchy and foreign subjugation.

The experience of domination by powerful British and Russian empires predisposes Iranians to feel that they are never masters of their own fate but rather subject to the wiles of foreign manipulation. Events never have simple explanations but rather reflect the existence of unseen political forces at work behind the scenes manipulating reality. An historically-created suspicion and xenophobia is reinforced by the psychological makeup of Shi’a Islam that emphasizes an environment of suffering and injustice as the inevitable price of commitment to the true faith. A suspicion and arrogance toward the external world is thus coupled with a driving determination for independence and non-involvement with foreign powers- thereby placing a premium in a world often dominated by harsh external forces that have attempted to dominate Iran.

Western powers often operate from the advantage of superior strategic power in their dealings with smaller countries- a situation that grants the powerful the luxury of operating through the direct and open expression of political intentions. But such powers will find themselves frustrated in encountering an Iranian political style born out of relative historical weakness, requiring it to operate through a range of hidden agendas and multilayered purpose.

Iran is destined to remain prickly and difficult power for western states to deal with, a state intent upon establishing its own hegemony in the region — in a political environment in which Iran perceives itself to have few if any friends. Yet its long civilization and richly endowed national capabilities suggest that Iran could well emerge as one of the most advanced states of the Middle east in years ahead.