World Reaction to the Show Trial; Another look at Why The Government of Iran Persecutes The Bahais. 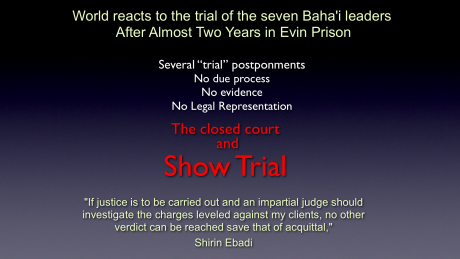 Why Does The Government of Iran Persecute The Bahais?

Are The Bahai s agents of Foreign powers?

Are Bahai Beliefs harmful, or disrespectful to Islam, as the IR and Shia Establishment like to portray?

Some of the questions discussed in Persian and Englsih in this video that was broadcast to Iran a few years ago, followed by VOA Persian’s coverage of the Bahai Arrests.

The Bahai “Yaran” were arrested almost 2 years ago, languishing in Evin Prison without any due process or legal defense, with several postponements leading to yesterday’s show as a Trial by the Iranian Judiciary.

In this 3 Part Analysis of the charges against The Seven Bahais (Yaran) , VOA Persian TV examines the spying charges against the Bahai as well as the history and the regimes agenda , with the help of both Bahai and Non Bahai responses to the charges.

GENEVA — Iran’s decision to begin the trial yesterday of seven Baha’i leaders has triggered a strong international reaction, including a call by Nobel laureate Shirin Ebadi for their immediate release and ultimate acquittal.

“If justice is to be carried out and an impartial judge should investigate the charges leveled against my clients, no other verdict can be reached save that of acquittal,” said Mrs. Ebadi, in comments posted on WashingtonTV, a Web-based news service in the United States.

Mrs. Ebadi, who is one of the lawyers for the seven, said she had carefully read the dossier of charges against them and “found in it no cause or evidence to sustain the criminal charges upheld by the prosecutor.”

Others also expressed concerns about the fairness of the trial, calling for it to be open and held in accordance with international legal standards. Governments and prominent individuals in the European Union, the United States, Brazil, India, and Canada issued strong statements of concern.

The European Union statement came yesterday, echoing an earlier call for international observers to be allowed in the trial of the seven Baha’is.

“The EU recalls that freedom of thought, conscience and religion is a fundamental and undeniable right which shall be guaranteed in every circumstance,” the statement said. “The EU calls for a just, fair and open trial respecting all international standards and obligations. …”

In Brazil yesterday, Luiz Couto, the president of the Human Rights Commission of the Federal Chamber of Deputies, said in a letter to the Iranian ambassador to Brazil that it appears the “trial is not transparent and public,” and that any closed trial would violate the right to a full and fair defense.

“We consider the freedom of religion and belief – that of Muslims, Christians, Jews, Buddhists, Baha’is, and all other religious expressions – a fundamental human right for democracy, both in the east and west,” said Congressman Couto.

On Monday, the United States Department of State condemned Iran’s decision to move ahead with the trial.

“Authorities have detained these persons for more than 20 months, without making public any evidence against them and giving them little access to legal counsel,” said Philip J. Crowley, assistant secretary, Bureau of Public Affairs, U.S. Department of State. “These persons are entitled to due process.”

In India, prominent Indians called upon the government to take up the issue of the Baha’i persecution with Tehran. “Our country has a long record of pluralism and tolerance and must speak out,” said Maja Daruwala, director of the Commonwealth Human Rights Initiative, according to The Hindu newspaper on Saturday.

In Canada, Foreign Minister Lawrence Cannon issued a statement on Friday expressing deep concern about the ongoing detention of the seven Baha’i leaders. “It is deplorable that these individuals were detained on the sole basis of their faith and have been denied a fair trial,” said Mr. Cannon.

Leading human rights barrister Cherie Blair in an interview today with the BBC World Service called for the release of “this group of people who live a religion which preaches peace and did nothing whatsoever to deserve this trial.”

In the WashingtonTV interview, Mrs. Ebadi, who is currently outside Iran, also offered a glimpse of what happened yesterday inside Branch 28 of the Revolutionary Court, where the “first session” of the trial was held.

She said only two lawyers of the Defenders of Human Rights Center, which she established, were able to be present in the court. And that in spite of a request for an open hearing, the court was closed.

The charges against the seven were reiterated yesterday in news accounts in government-sponsored news media. They were given as: espionage, “propaganda activities against the Islamic order,” the establishment of an illegal administration, cooperation with Israel, the sending of secret documents outside the country, acting against the security of the country, and “corruption on earth.”

Diane Ala’i of the Baha’i International Community said the seven have consistently and categorically denied such accusations. “We can be certain that they also did so in front of the judge yesterday,” she said.

All but one of the group were arrested on 14 May 2008 at their homes in Tehran. Mrs. Sabet was arrested on 5 March 2008 while in Mashhad. They have been held in Tehran’s Evin prison ever since, spending their first year there without formal charges or any access to lawyers.

Prior to their arrest, the seven served as an appointed, ad hoc group known as the “Friends.” Their role, carried out with the government’s knowledge, was to see to the minimum spiritual and material needs of Iran’s Baha’i community, which has been without formal leadership since its elected governing bodies were disbanded in response to a government decree in 1983.