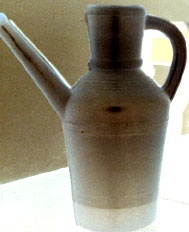 In 2006 I remembered and posted a 40-year-old poem written by an American called “Ode to a Persian thunder mug“. In the introduction I wrote, “Put it on the web let’s see if anyone can claim it.” And it worked. Last week the co-author wrote me this email:

Oddly enough my late mother and I wrote that poem while living in the Point Four transient apartments shortly after my father had been posted to Tehran, Iran back in 1962. I’m glad your memory is better than mine, because I’d long ago lost any copies!

Dad had his secretary type it up and mimeographed, after which it became rather widely circulated. I even found copies posted at the American Club, the Iran-American Society, and other odd places! 🙂

My reply to Bill:

Thanks for getting back to me.  I was working strictly off of memory and no doubt got some of the wording wrong.

I hope you have duly informed Iranian.com to make sure the authorship is corrected.

I have no pleasant memories of the Persian thunder mug
The throne room in each household where you go to pull the plug.

So I damned the guy who designed it as I crept up to my lair
May his hell be that toilet and may he rot forever there!