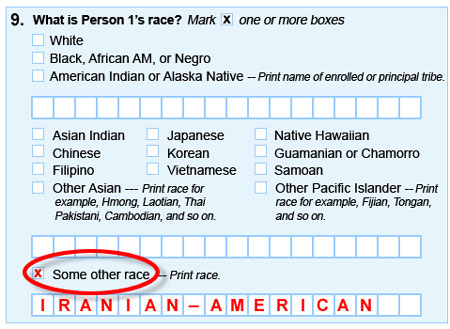 As the 2010 US Census approaches (we should all receive our surveys in the mail by April 1, 2010) the expectations are rising as we come about as close as we have ever come to the holy hallowed all important “number”.

You know the “number”? The number of Iranians in the US. Some feel that there are for as many as 4 million Iranians in the US. This expectation is too high in my opinion, and all the leading data and bets indicate a number like 850,000 may be more realistic.

The claims being made by vocal members of the community and all the community foundations, are that we need to be counted so we can have political power and so on, but whether you are 4 million or 850,000 still makes you less than 1% of the US population, which isn’t going to get you much power. Especially if you don’t vote.

And what are we going to do with that “power”? It’s not like we need any major protections, and as far as we can tell, the US government in not out to get us. In fact, as former citizens of terrorism sponsoring states go, we have fared unbelievably well considering the high temperature between the US and Iran. Better than the Arabs for certain.

What the census affords us by counting Iranians, is the opportunity for us to find out pretty accurately where we are, and that will hopefully allow us to finally come together. Not just for politics, but just for us.

All the .orgs are drooling over the census data on Iranians because it will no doubt help them plan their cultural and community building activities around us better, including budgets from membership drives, once they know where in the US we tend to be the thickest! Not that Iranians are thick by any means!

Although the census will not collect or divulge any personal private information to anyone (including other US departments like Welfare or Immigration), they will absolutely know by name, by phone area code as well as by zip code how many Iranians there are in the US.

This is assuming of course you bother to fill out 2010’s simpler 10 question (that’s it!) survey at all, and assuming you mark Question # 9 “What is Your Race?” correctly, to allow yourself to be counted as an “Iranian” or “Iranian-American” (either is fine) rather than “White”. Something many of us are still justifiably hesitant to do.

The trick in all of this, and the dilemma is, how to be counted as bodies in America, while also being counted as Iranians.

On the one hand, the US census needs to count all the “bodies” in order to ensure that the correct amounts of federal monies per counted person are sent to the right parts of the country. If you’re not counted, your town, city, county, or state won’t receive your share of $400 Billion. And that’s annually! This comes out to almost $3,000 per Iranian, per year. So don’t fill out the survey, and the town you live in loses $30,000. Per Iranian.

On the other hand the Iranian .orgs and community foundations, need to know how many we are, for a variety of obvious reasons, mostly so they can assess the service requirements they will need to undertake. The cost of doing this themselves or even together is too expensive. So needless to say they are all advocating participation.

The dilemma of these two motives is exacerbated by a less than effective and clear census itself, which doesn’t ask the real question of ethnicity as properly as it could.

“Person 1” here refers to the information you provided in Questions #1 and #5, which ask about the number and name of each person living in the residence the survey was sent to. So, you will have to fill out the survey for each person that lives in your home, including any relatives and so on. Yes, you must fill out their full name.

So, the rumor that the census survey is anonymous, is not true. Make no mistake, you will be providing your full name and telephone number in this survey.

Next come the all important boxes!

The first box will ask if you are White

The next box asks if you are  Black, African Am., or Negro

The next box asks if you are American Indian (as opposed to Indian-American!) or Alaska Native. If you are you must “print the name of your enrolled or principal tribe.”

The next box asks if you are Asian Indian

The next box asks if you are Japanese

The next box asks if you are Native Hawaiian

The next box asks if you are Chinese

The next box asks if you are Korean

The next box asks if you are Guamanian or Chamorro

The next box asks if you are Filipino

The next box asks if you are Vietnamese

The next box asks if you are Samoan

The next box asks if you are Other Asian in which case you must “Print race, for example, Hmong, Laotian, Thai, Pakistani, cambodian, and so on”

The next box asks if you are Other Pacific Islander in which case you must “Print race, for example, Fijian, Tongan, and so on”

Then in the very last box all the way down at the far bottom end of Question #9, it finally asks if you are “Some other race – Print race”, and this is what all the groups and .orgs want us all to fill out as “Iranian” or “Iranian-American”.

However, technically, and this is where all the confusion comes in, (if you haven’t become totally confused yet!), we are according to every archaeologist since Margaret Mead, racially classified as “White”. Although ethnically we would be classified as “Iranians” or “Iranian-Americans”. But Question #9 clearly asks “What is your race?”

So to help us get our best number yet, it is up to you. You will have to decide. Do you want to be classified in the US as White, or as “Iranian” or “Iranian-American”?

Still confused? Well at least thank your stars that you are not me. I’m half-Ghashghai and half-German!