ROYALTY AND THE PEOPLE: Prince Ali Reza Cheered by Rioters (1953) 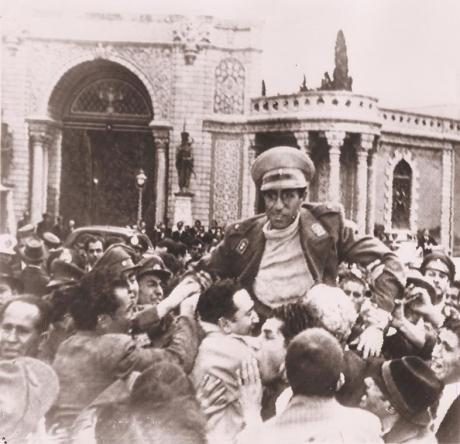 PHOTO CAPTION: NY March 2, 1953: IRANIAN RIOTERS CHEER SHAH’s BROTHER: Shouting Iranians carry Shah’s brother Prince Ali Reza on their shoulders in Tehran during riotious demonstrations against prime minister Mohamed Mossadegh. Rioters shouted “Give us the Shah or Give Us Death” during the demonstration in which they drove Mossadegh out of his home. As demonstrations continued today, Mossadegh Ordered the Arrest of 70 retired and active Army Officers to gain the upperhand in his war against the Shah’s Supporters. AP Wire Photo via Radio From Rome. (circa 1953)