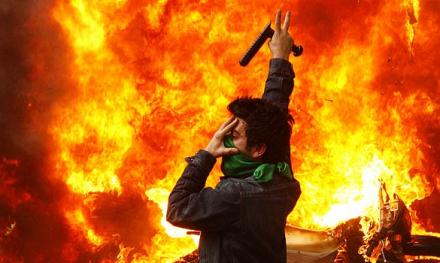 I haven’t got a viable answer yet!

A few days ago I posted an article on this site in which I have posed a question to Reza Pahlavi and his supporters in particular and the rest of Iranians in general. Asking: “what is the difference between RP and Khomeini, or more importantly what is the difference between the current generation and the one who brought Khomeini to power in 1979?”

The reason I asked this question was that I witnessed the mayhem of 1979 in first hand and observed how Khomeini went back on his words. I saw how we simply handed the country from one dictator to a more brutal who was also an incompetent and a traitor who as said himself had no feeling for Iran and Iranians.

I asked this question specifically from RP and his followers because so far he is the only leader, who is asking all the different political groups to come under one umbrella of unity, while holding to their own political ideology (just as Khomeini did in 1979). I also indicated the parallels between the two eras. Furthermore I explained that I am asking these questions because I am concerned about the future and the possibility of us repeating the mistakes of 1979 and not because I have any particular views in towards or against RP or any other leader. I simply can not see the advantage of a constitutional parliamentary monarchy over a democratic Republic or vice versa for me it is the contents that counts and not the name.

The first answer I got back looked promising because at least I felt that I got my audience thinking. However except a handful (the best of which was from Veiled Prophet of Khorasan) the rest of answers were aggressive, radical, insulting and most of them depressingly irrelevant.

Well, I guess the only comfort I could draw from these accusations was the assurance that I seemed to have kept to a none bias, straight and narrow path right in the middle, and the fact the I was accused by each one of these radicals of belonging to the other extreme, simply because I was not in total agreement with them and made them to confront a definite reality, reaffirmed my foots on the middle ground.

Whether we like it or not, RP is a definite reality and support for him is gathering momentum inside Iran. From where I am standing this is at a speed far faster than what you and I might think or like, and despite what we might think he is making some very smart strategic moves which are being strengthened by our denial, clumsy reactions and lack of knowledge about our history, even as close as 30 years ago.

And boy we lack knowledge. I continued to be stunned, surprised and mostly saddened, while reading the fictions and fantasies some commentators were coming up with, regarding the events of 1979. Some of our friend claimed that Khomeini had a network of masques and mullahs who collected money for him through Khoms and Zakaat and were distributing his cassettes and speeches into small towns and villages.

I tell you it is so sad to see that our people especially the educated internet generation know so little about a past event so recent.

First of all the mullahs did not have the logistic and the know how to pull such action. Also as I remember on those days having a radio, a TV or cassette player was considered to be un-Islamic and forbidden (haraam). Now I do not know how these mullahs could use something forbidden to address a religious radical audience who consider this technology un-Islamic and are fighting against it in the first place. Also the money they were getting through vojoohat was too little and they were too poor, stingy and tight fisted by nature to send any of it to Khomeini

Secondly as far as I remember the revolution started from universities, offices, schools and factory floors of major cities like Tehran, Tabriz and Isfahan and Mashhad. This was while the small towns and specially villages remained loyal to Shah until the very last days. That was for the simple reason of his land reform scheme. Now I am not arguing for or against “Eslaahaat e Arzi”. I am just stating that this was a major support winner for him especially in rural areas. I still remember in his last trip to Mashhad in summer of 1357, as the ordinary people living there did not want to come out and greet him the authorities bussed a lot of villagers from surrounding areas into Ahmad Abaad Street in order to put up a show of popularity and support for him.

Sounds familiar doesn’t it? Well, at least they weren’t paid.

On the other hand as I still remember vividly it was group like, MKO, Cherik haa ye Fadaayee, Jebhe ye Melli and especially Hezbe Toodeh who took upon themselves the task of promoting Khomeini in major cities, university campuses, factory floors, government offices and even mosques. That was why contrary to the perception of many people today, the revolution started from universities and government offices of major cities and not the small towns or unknown villages.

The irony is that although these groups do not want to admit it, most of them have already accepted their fatal mistake though even in private. They remember very well that Khomeini was a nobody and in fact up to a few months before 22 Bahman not many people knew him or what he stood for. This is why today they are so reluctant to form a coalition with RP or any one else who is asking for unity and put their political weight behind him. That is why for example communists choose to ignore RP and not give him any publicity at all.

However these groups are still missing one major factor which to my opinion would be their fatal mistake and dawn fall. Unlike Khomeini of 1979, today RP does not need logistical help from such groups in order to relay his message into Iranian living rooms. The era internet, satellite TV and 24/7 news has already taken care of that issue and has made such organizations logistically irrelevant. However what RP is really doing here is making an appeal to their grass root supporters and the masses inside Iran. By asking these groups and their leaders for uniting with him without abandoning their own ideology, he is actually putting them in a pretty awkward situation. Because if they accept his invitation to form a coalition with him then it would send a demoralising message to their own grass root supporters who might think why do they need to always line up behind “Shah or Sheikh” in order to be taken seriously? On the other hand if they refuse his offer a question would be formed in the minds of ordinary undecided people and that would be WHY? If these groups really advocate democracy and pluralism and if they are as popular as they claim to be, then what are they afraid of. Why they do not unite to help delivering this country into a: as put by our friend parchameserang “a Democratic, Secular Constitution” and then let us the Iranian people chose the type and title of that democracy through ballot box and free vote in a proper time??

Now my concern is that, in a few months time when the supports for RP has accumulated to the level that would no longer be deniable or ignorable, many of these groups would then be forced to sit around the negotiation table and strike a deal with him. But by then it would be too late and they would have very little leverage and chips to burgeon with. By that time the negotiation would be on his terms as he would be the one with public support behind him, and as it was indicated by some even in this blog the next vote could be to choose between “monarchy and IR” or just like the last time “monarchy, Yes or No”. Now to my opinion this would be a disaster for democracy and consequently a disaster for all of us.

However it seems that most of us do not want to face this reality and see it for what it is. We still think that by wishful thinking and putting all our faith in one person (RP) this problem can be solved or by ignoring this issue it will go away or even naively think that by insult, accusation and ridicule we can push people out of the political arena. Well my friends! Fat chance.

We are still scared of engaging in dialog and asking the difficult question. An approach which to my humble opinion is the most effective and may be the only way to prevent another 1979 disaster.

Today I am sensing a great danger lurking round the corner. If we do not address this issue properly and fail to develop a viable strategy to deal with it we could be sleep walking into another dictatorship and in 30 years time our children would have to go through this hell all over again. If the 1979 generation knew their history and learned from the mistakes and failures of 1941, they would not have made those fatal errors and as a result our people wouldn’t have been at this point today. Now if we make the same mistakes by not learning from their errors we could simply doom of children to another thirty years of the same.

Finally for all those who are thinking about making this issue personal and discussing me and my political integration instead of looking for an answer to this question. I would announce that:

I am a monarchist, I am a communist, I am a member of MKO, I am a republican and I am all and none of those. If you think insulting me and asking irrelevant questions about my life, where I live, my choices writing style, my taste for food or even the colour of my underwear would solve your problem, then by all mean. Go for it. I am even willing to ask JJ to publish my email so that you can send me as many insulting mails as you want. But after you have done all that and took it all out of your system, then sit back, take a deep breathe and THINK!. Ask yourselves:

“What is the difference between us and the previous generation? What have we learned from their experience to prevent us from sleep walking into another dictatorship???? And more importantly do we know this time what is it that we really want, or like the last time we only think we know what we do not want and finally are we looking for solid binding commitment from our potential leaders or even today a person like RP, Rajavi, Mosavi, Karoobi, Sazagara, Ganji …, can still get our unquestionable support with as little as a wink and a nod?”