Stay Tuned To Radio 6 Centi AM… 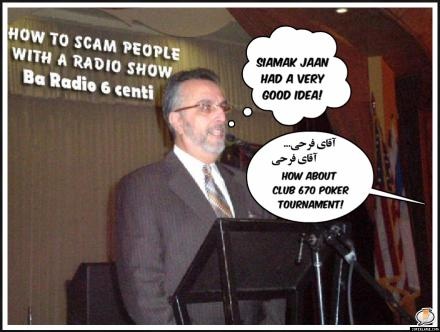 One week ago we all learned about Mr. Farahi’s departure (indictment by the SEC) and cancellation of his very popular show on 670AM radio (KIRN) station in Los Angeles; Gashto Gozaar-e Eghtesaadi. Of course, no one heard it from the Radio station, but mostly from internet and/or friends. The listeners of this Radio Station, which are only Iranians, did not receive this news from their beloved Radio. In fact, they still don’t know what exactly happened. All last week, we have read nothing but complaints from listeners of this station via the internet’s social sites.

During all this mess, I hear a fight between 670AM host Mr. Kalhor and a very polite lady on the phone over the air about a poker tournament, which he (Mr.Kalhor) is promoting with the sponsorship of 670AM. It’s a very interesting call. I realized so many new things about Mr. Kalhor from this one show that I could not believe. For example, he strongly believes that people demonstrating in Iran are being helped by outside powers. And that If anybody says anything critical about him, should be arrested right on the spot!!! Among other interesting things, which he hides behind his seemingly gentle soul. He will even read us a poem… if we are good!

So many people have asked Tak Negaar, a facebook member, to find out who this mysterious man with a tah-reesh* is!!!

So here we go: we found Mr. Kalhor currently has up to 3 or 4 shows a week. He is receiving this in return for a sloppy and cheap looking website that he has designed for 670AM. Also, he secured an anchoring position for his brother Babak kalhor, as a political analyst! And his mother is in charge of monitoring all of the shows and programs on 670AM. I mean, she listens to “all the shows,” and reports to Mr. Paley. Of course, this is not done in order to keep the radio shows at a higher quality standards, but to decide on liking or disliking the host and by listening to whatever is dictated to her by his beloved son. Tak Negaar and friends would really like to ask her a few questions about Mr. Farahi’s show. I have never met Mrs. Kalhor, but if her son is about 50 some years old… I guess she should be at least 70 and I am not sure if she speaks any English or how she was reporting directly to Mr. Paley, which by the way is a very nice gentleman, just turned 84, wonderful man, God Bless him (survivor of 2 cancers).

Oh, one more fact about Mr. Kalhor. His company (Pars National) is also the only one in charge of taking public opinion surveys about the Radio, which claims his show is even more popular than Mr. Holakouee’s daily show!!! You can put the dots together yourselves!

After finding out all of this, I was not surprised to hear him talking this way to our fellow country man/woman defending his new pet project “Club 670AM poker tournament” on the air.

We still don’t know what or who gives him the rights to do this, but I am strongly suggesting to Mr. Kalhor to just read us more internet clips about computers, or even read us more of those foolish romantic poems with his “Jaahely” accent. Believe me, he is more amusing that way.

Mr. Kalhor, I have seen Mrs. Homa Sarshar’s resignation letter from the Radio, and what she says about you is not very pretty. (As soon as I can confirm it, I will post it.)

But for now, I just want to share a few minutes of Mr. Kalhor last show with all of you. We listened, because he was threatening Tak Negaar on 670 AM air wave. Remember his show is supposed to be about computer problems!

With Respect to 670AM KIRN