The Man on the Street 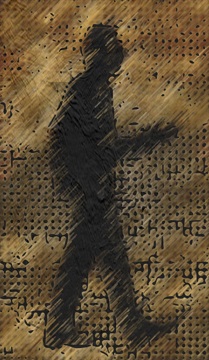 It’s funny when the man on the street is not your own, when the fellow you see who makes you go inside yourself and say, “Oh America, do you have any idea how little anybody is asking of you?  Do you have any idea how much he just wants to have a pleasant enough afternoon and isn’t asking the world of anyone?”, the fellow you see who breaks your heart and lets you remember yourself by putting it back together again, the one who has been made in cities and towns, with the hard edge of blocks made of lines and corners, lines and corners that he has taken upon himself, having said to himself that if this was what the world was, he was going to need some lines and corners inside himself too, and they’re there but they don’t cover up an eternal softness either, one that goes back to childhood poems and songs learned in America, learned by an American as the product of generations and learned by an Iranian as a discovery for the first time, and yet it is an American moment when they pass each other by, because everybody needs a man in the street, and they are both men in American streets, and I would’ve liked to have an Iranian man in the street, one I knew by his walk and his clothes and his not asking for very much of the world, and there will always be a part of me that will wonder if he would’ve gotten more consideration in Iran, because it was lonely caring about the man in the street in America, not because of the man himself, but because it wasn’t a currency that was in much use in America.  Nobody ran into each other in the afternoon and went right into talking about the man they saw in the street this morning and the places their heart went when they saw him, or if they did, they didn’t do it enough for me.  So I grew up thinking that it was an Iranian’s job to care about the American man in the street.  There had to be somebody who would do it.  There were writers who were gone who had done it, but they were gone, so somebody had to do it.

And the funny thing is, he could’ve looked at me and gone straight to 1979 or some other simplified attempt to grasp the American moment, to hold it in his hand and put it in his pocket like it was something that could be bought at a store, but the man on the street could come to the moment new, lostly and tremblingly, but ready to let the moment be more unknown than known.  The newspapers would still do that other stuff.  The newspapers and the history books and everything else that wasn’t attuned to time.  They took the easy way out, refusing to recognize that what they didn’t know was as big as what they knew, if not bigger.  The man on the street had that at least.  He looked like an Iranian might catch him in the moment and say ,”What is Iran?” and he might say ,”It is made of people.”  He looked like there was a chance of it at least.

I don’t know what the American man on the street thinks of an Iranian who is trying to squeeze every drop of poetry out of their encounter, who doesn’t know what else there is for him to squeeze, because he came at age six and began an American moment which always placed the man on the street at its center, which found that center more precisely the more the man wore how lost and trembling he was, before an Iranian had even walked by.  Before an Iranian had even walked by, it was the world that had him looking like that, and I’d walk by and want to tell him – you can make a country out of that, you know.  You can make an America out of all the things you’ve made an America out of, all those things that have placed a man on the street with lines and corners inside him and an eternal softness as well, all the stories and songs and myths and rules and broken promises and false histories, or you can make an America out of how lost and trembling we both are before we even walk past each other in the street, and I know the leaders of nations have never been poets, but how else can you explain the way I could have a man on the street who is not my own except to say that America depends on what any two people agree with their hearts that America is, and it’s always been easiest for me to agree with the man in the street, the one who doesn’t expect America to give him any answers any more, or at least no answers bigger than he can give himself, who knows somewhere inside him that the sky is the sky everywhere, and however small he feels or however big he feels under it would be about the same anywhere, and the truth is maybe it wouldn’t, but that’s how he’s going to step into the day, and I’ve stepped into days where I’ve said to myself that I am an Iranian who is in America, and the sky at least is the sky everywhere, and I’ve missed the Iranian man on the street like crazy, I’ve missed him most of all because I’ve never had him, I’ve missed him most acutely when the man in the street has been out in the street demanding a country where nobody feels small and everybody feels big, but the American man in the street has been making demands too, it was seeing those demands on his face that got me interested in him in the first place, and the way he did not always seem to know what those demands were, and that he did not always know if he had a right to have them, and I wanted to look back at him in a way that said, look, I don’t know what those demands are either, but if they are nice and fair, if you are looking at the America up in the sky as a model for the America down on the ground, then you have every right to make those demands, and I don’t have any model for how an Iranian moves down that street, except to remember yesterday, to remember that the view of the man in the street may have had the highest or the lowest, it may have had the recognition of loneliness as the thing that everybody is in together or as something that I could only share with another Iranian walking down an American street and maybe not even then.

That’s how it is when the man on the street is not your own, but the funny thing is that I still had him.  I didn’t have him in American homes, not intimately at least, but I still had him everywhere else, in libraries and bus stations and highways and everywhere else I had been or seen in America, and I did have moments when I wanted to say to hell with all those places if all those places contain people who don’t know what to do when an Iranian walks into the room, but I never set out to look at America and see poetry, it just happened, and I know enough to pay a lot of respect to things that just happen, because there’s only a few of them that come along, and everything else is like the man in the street – you have to go back to the couple of things you know for sure to have any chance of understanding them.