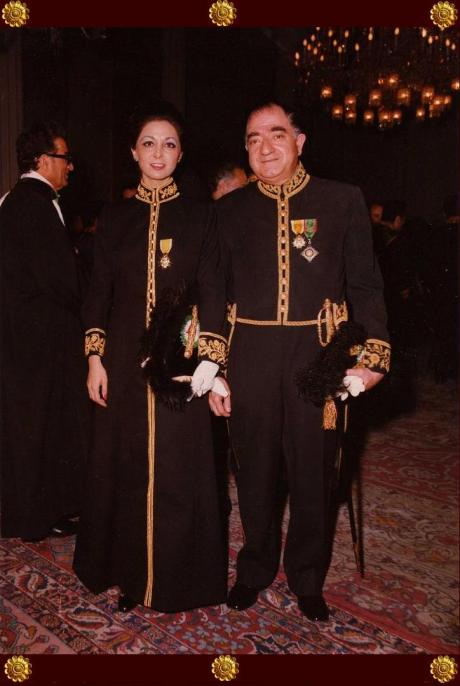 Abdol Ali Ghaffari (1921-2002) and Ms. Afsari at Salaam Ceremony at Golestan Palace. Ghaffari was the General Director of His Majesty’s Imperial Court up to February 1979. He was also Chief of Staff to Prime Minister Amir Abbas Hoveyda,

Abdol Ali Ghaffari (1921-2002) was the General Director of His Majesty’s Imperial Court up to February 1979.  Before that he was the Chief of Staff to His Excellency Amir Abbas Hoveyda, Prime Minister.  His other roles were: the Chief of Conferences in Iran, worked with Her Highness Princess Ashraf in the illiteracy campaign, the Chief of Staff to Abdullah Entezam when he was the Chairman of the National Iranian Oil Company and as a start to his career a junior member of the State Department (Ministry of Foreign Affairs)  He and Hoveyda met and became life long friends in Belgium when he was a student in Geneva and Hoveyda was in Entezam and Ali Mansour’s circle.  Ali was a mason, in the Aftab Lodge, part of the Grand Lodge of Iran.  For a while, in the early 80’s, he was the leader of the Safi-Ali Shah Dervish sect.

A civil servant or public servant is a civilian public sector employee working for a government department or agency. The term explicitly excludes the armed services, although civilian officials will work at “Defence Ministry” headquarters. The term always includes the (sovereign) state’s employees; whether regional, or sub-state, or even municipal employees are called “civil servants” varies from country to country. In the United Kingdom, for instance, only Crown employees are civil servants, county or city employees are not.

Many consider the study of civil service to be a part of the field of public administration. Workers in “non-departmental public bodies” (sometimes called “QUANGOs“) may also be classed as civil servants for the purpose of statistics and possibly for their terms and conditions. Collectively a state’s civil servants form its Civil Service or Public Service.