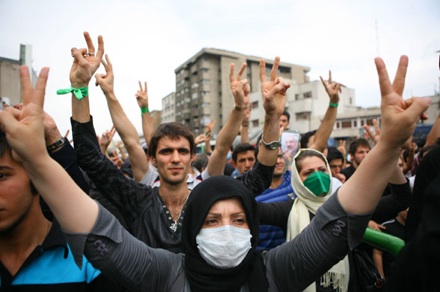 Iran’s Green Movement is the subject of much controversy these days.

While some are of the opinion that it is no more than a civil rights movement in pursuit of specific concessions from those in power, there are those to whom the movement is no less than a revolutionary phenomenon destined to topple the Islamic Republic [1].

Whatever the truth behind such speculations, one thing is for certain: Iran’s Green Movement is the concrete embodiment of an emerging democratic consciousness on the part of the majority of Iranians, and, as such, cannot be reduced to its component parts, including its leaders.

In other words, the movement will continue to go forward in spite of the Islamic Republic’s frenzied crackdown on individuals and organizations associated with it, so long as the prospect of a democratic Iran continues to inspire Iranians from all walks of life [2].

What is more, contrary to the regime’s baseless accusation that the movement is tantamount to a “velvet revolution” orchestrated by foreign powers, the fact that the ideological roots of the Green Movement can be traced as far back as the Constitutional Revolution of 1906-11 is clear proof that it is undoubtedly an indigenous phenomenon of an historical nature.

Of course, when it comes to such sinister accusations, one must not lose sight of the fact that they stem from the hardliners’ fear that the Green Movement might eventually rob them of their illegitimate sway over Iran’s politics and economy by facilitating Iran’s transition to democracy and thus the rise of a new social order in which authority would rest not with the supreme leader and his small circle of friends but with the people of Iran and their true representatives.

While the hardliners are correct in assuming that a successful transition to democracy will put an end to their illegitimate power and authority, they are incorrect in blaming it on the legitimate struggles of the Green Movement, for the real reason behind such a prospect is their own thirty-year domination of Iran’s key institutions of power (political, economic, and judicial), which has led to a situation where pluralism is nonexistent, due process of law ignored, public and private, including foreign, investment too risky, and stagflation a characteristic feature of the economy.

Here, the plight of over 47 million Iranians who, according to a joint report by Iran’s Central Bank and Statistics Center, are now living below the line of poverty is a good case in point, as are the plights of Iran’s banking industry and foreign reserve fund, though they expose merely the tip of the iceberg.

Were the above situation to persist for much longer, the Green Movement will see the ranks of its active participants swell by the millions, thus making the collapse or overthrow of the Islamic Republic a highly likely event.

Is there a way for the regime to avoid such a gloomy prospect, one might ask.

There is, provided the leaders of the Islamic Republic are capable of committing themselves to the process of democratization in Iran, which presupposes a genuine effort on their part to overhaul the Constitution, so as to bring it into line with principles of democratic governance.

This, of course, is a survival strategy that has been successfully adopted by many authoritarian regimes in the past (e.g., in Easter Europe and South Africa), and as such should prove useful to the Iranian regime.

Whether the Islamic Republic will adopt the above strategy in time to save itself from a painful demise remains to be seen, however.

Judging by its past behavior, this will probably not be the case.

NOTES
1. Of course, some, including the hardline leaders of the Islamic Republic, are of the opinion that the Green Movement is no more than a fad which will soon disappear. This position is not worth considering here, however, as it is too far removed from the reality and history of Iranian politics.

2. Perhaps a military strike on Iran’s nuclear facilities would be the only event capable of seriously undermining the Green Movement. Let us hope the West is not so shortsighted as to let this happen.