So much in common 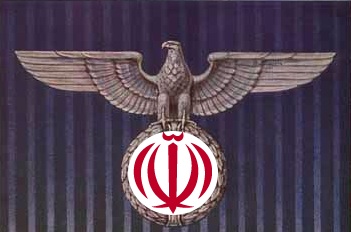 “Today the house is no refuge, no protection anymore.” Luise Solmitz

The English historian, Richard Evans, in his three extraordinary volumes on Nazi Germany goes into great detail about the rise and fall of the third Reich. As someone who follows the events in today’s Iran, reading the 700 pages of volume two, The Reich in Power, I am struck by various similarities between the Nazi regime and the Islamic Republic. One is the role of resentment of perceived humiliation by foreign powers in both regimes. The Nazi regime derived much of its popularity and ideological fervor from anger about the humiliating terms imposed on Germany following World War One. The Islamic Republic owes a good deal of its existence and initial support to the perception among Iranians that the Shah had been a lackey of the West and in particular the United States. Both regimes were swept into power by ideologies that promised purification from the prevailing corruption, virulent race-based nationalism in Germany, and a return to Islamic values in Iran. And in both countries, the corruption that followed was far worse than what existed prior to the revolution.

In their methods and techniques, too, the two regimes show similarities—beyond the propaganda in the form of posters, overblown rhetoric, and the adoration of the Supreme Leader. Perhaps the most striking of these is the use of paramilitary forces. Nazi Germany employed the SA Brown Shirts and the SS to establish and maintain control through intimidation and terror. Iran has done the same by mobilizing the Revolutionary Guards and the Basij militia. As was true in Germany, its members typically come from the impoverished rural areas, where intellectual horizons are limited and opportunities are few. They are young lads who are given power, money and guns—in short, a cause and a goal in life inspired by ideology.

Ruthless in nature, the German paramilitary forces went on a rampage, intimidating, arresting, and killing their opponents. Supported and funded by the state, they had the authority to do as they pleased without answering to anyone. Their Iranian counterparts have not been as deadly to date, yet they have proven just as brutal and ruthless in their operations.

The German forces also had ample opportunity to enrich themselves. The SA and SS were given so much power that they created their own virtual economic entities. Reich Chancellor Hitler endorsed and approved distributing money through bribes to the Nazi officials and the rank and file. Vast amounts of money were thus channeled into the hands of the Brown Shirts, while propaganda officials and others received equally large sums of money from the expropriation of Jewish companies, private and public. Evans points out: “with such money flowing into their accounts, it was small wonder that Nazi officials at every level of the hierarchy were soon enjoying a lifestyle they had not even dreamed of before 1933.”

The same has been true in Iran. Supported by the state and endorsed by the Supreme leader, the Basij wield enormous power and hold major economic interests in many industries including the nuclear energy business. Some of Iran’s ex-revolutionaries are now landowners, industrialists and hold vast amounts of property both inside and outside Iran. The head of the Expediency Council, Hashemi Rafsanjani, is legendary in this regard. The Larijani brothers, too, are amongst the rich and (in)famous in Iran; one is the head of Judiciary, the second is head of the Majlis, the third is a member of the Parliament, the fourth is Deputy Foreign Minister and the last one, was a diplomat. All have been key advisors to the Supreme Leader. Even the son of the Supreme leader, Mojtaba Khamenei, is alleged to have extensive bank accounts in Europe.

The purges, massive arrests and ruthless eradication, either physically or mentally, of journalists and intellectuals, are very similar to the Nazi era as well. Many of Germany’s most prominent poets, artists, doctors and engineers were either purged or left the country under tremendous pressure. Iran has seen numerous examples of the same trend, with some of its best scholars, men and women of the pen and political activists fleeing the country in unprecedented numbers. Gholam Hossein Saedi, Iran’s most famous playwright, comes to mind. Depressed and heartbroken, he died in Paris a few years after the Revolution.

Unlike the Nazis, the Islamic Republic has also hounded its compatriots in exile. Political assassinations were prevalent in the early days of the Revolution; some eighty members of the opposition were gunned down in European capitals. Recently the violence has taken a domestic turn, with a Kahrizak (the prison closed down after the revelation of horrific tortures) doctor, a Tehran University professor, a nuclear scientist, and a few provincial judges either dying mysteriously or murdered. Even Mousavi’s nephew was shot to death, and his wife, Zahra Rahnavard was beaten. In the last few days, two young participants in the recent demonstrations have been executed. In Germany, the Nazi regime eliminated its opponents—communists, social democrats and even Catholic priests. The Islamic Republic targeted the Mujahedin, secular leftists, and members of the Bahai faith, ethnic Kurds, and even many of the progressive outspoken clerics such as the late Grand Ayatollah Montazeri.

Finally, there is the question of corruption. Corruption by officials was held to a double standard in Nazi Germany. Corrupt officials were let go or put on trial in secret, without media attention; in other words, corruption was largely overlooked. In Iran, too, many of the regime officials have been largely free from prosecution by the judiciary since 1979. Saeid Mortazavi, Tehran’s former prosecutor, who is notorious for his treatment of political prisoners, is a good example.

The Third Reich lasted a total of twelve years. The IRI is still in power after thirty-two years. Third Reich was brought down by a joint attack of allied forces. One major difference between the two, Iran’s lack of territorial expansionism, has saved the regime from a similar operation. Most Iranians would not want an attack on their soil, fearing the grave consequences. External aggression would unite all Iranians. Yet, at times, it seems as if there is no alternative to a violent overthrow , even though violence is the last thing Iranians wish for.

The Nazi regime ended in disgrace with many of its officials committing suicide, leaving the country or being arrested and held in prison before facing long trials. The Chancellor himself, disgraced and humiliated, committed suicide. A similar fate may and, arguably, should befall many IRI officials. They may have to face tribunals for CRIMES Against the Iranian people. Who knows, maybe in the holy city of Qom.