Welcome separation and independence from Iran 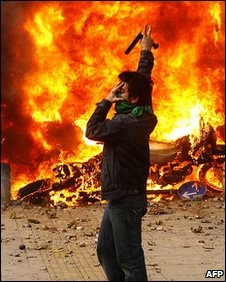 All of you guys are always talking about liberal democracy with great praise as I do, I hope you gonna tolerate and understand what you will read next. This oppressive regime will eventually collapse. Liberal democracy is coming soon and there will be no more oppression, neither from the government nor from the people who hate us for no obvious reason other than the ugly racism.

There are dozens of countries around the world with populations characterized by being a mixture of cultures and ethnicities. Switzerland and Iran are two examples, but how far the two countries are in terms of discrimination among races. Unfortunately as a matter of fact Iran has one of the worst profiles in this regards. The current evil government in Iran has been applying a systematic oppression against many of the ethnic and religious minorities. Among those ethnicities suffering the worst discrimination in Iran are Arabs.

According to Amnesty International, Arab population of Iran is one of the most economically and socially deprived and that Arabs have reportedly been denied state employment under the gozinesh [job placement] criteria.” Furthermore, it states “land expropriation by the Iranian authorities is reportedly so widespread that it appears to amount to a policy aimed at dispossessing Arabs of their traditional lands. This is apparently part of a strategy aimed at the forcible relocation of Arabs to other areas while facilitating the transfer of non-Arabs into Khuzestan and is linked to economic policies such as zero-interest loans which are not available to local Arabs .

At least 80% of Iran ’s source of foreign currency comes from the oil revenues. Iran ’s oil is almost exclusively confined to Arabistan (Khuzistan) but the original people of that area are, undoubtedly, the poorest citizens of Iran . The tragic financial circumstances of Ahwazi Arabs have a tremendous negative impact on their lives, yet this is not the main problem of Arabs in Iran . It’s, in fact, another issue.

No single Iranian can deny the social discrimination against Arabs. Very briefly, Persians hate Arabs. It’s one of the most prominent fact that every Iranian knows very well. Just make a search for the word “Arab” in Iranian.com and unsurprisingly, you will be encountered by a huge amount of hatred expressed against Arabs by Persians only in this website. “Uncivilized Arabs demolished our civilization and ruined our culture!” “Arabs forcefully converted us to Islam from Zoroastrianism” , bla bla bla…

Honestly, I’m not here to offend anyone but the fact is that Iranians do not only hate Arabs, they also regard them as a tenth class people while Persians are the first class! The most distressful issue is that when you are living in a country and being despised by your own fellow citizens just because of your race. Social racism and discrimination against Arabs in Iran are extremely common even among religious Persians. It’s exactly like the Nazi racism. It’s quite enough just to read the title and the last paragraph of this article:

These are not the views of ordinary Persian people only, the majority of the Persian elites and intellectuals like Sadeq Hedayat, Sadeq Chubak, Mehdi Akhavan, Nader Naderpour, and many others have a very extreme level of discrimination against Arabs (a typical Nazi racism). Hedayat’s view of Iranians and Arabs as two different and unequal races, one Aryan and superior, the other Semitic and inferior!!! Naderpour sees Islam not so much as wrong in itself, but wrong because it is Arab!!!

It’s a concept that has been profoundly wedged into the minds of Persians that the Persian race is higher than the Arabic! The typical image of an Arab in the eyes of a Persian individual is that dirty and smelly desert man. Well, this is not the truth even in the very old days, as Arabs (like other people) have a wide range of variation. Please have a very brief look.

And, the fathers of those Arabs, had the earliest civilizations ever. Mesopotamia ( Iraq ) is very well known in the west as the cradle of civilizations. The first one of these civilizations was the Sumerian. Kuzestan was a Sumerian land 2000 years before the appearance of the word Persian. http://en.wikipedia.org/wiki/Mesopotemia#cite_note-2

Back to our subject, there is no justification for that historical hatred. I won’t go into the vicious circle of debate about the endless questions like why didn’t your people (Persians) abandon Islam when the Arab occupation of Persia ended about 800 years ago? Why Safavids who were quite committed to the Persian identity didn’t impose Zoroastrianism back on Iranians rather than imposing another version of Islam (Shiism)? Why all of those millions of Persians are still crazily enthusiastic to be the best muslims? And saying that they are muslims before being anything else? Even if they hate IRI? Why Spain (who had a longer time of Arabic occupation) immediately got rid of every thing related to Arabs after expelling them from Iberia , while Persians did not? Why do you blame Arabs and not Persians for the existence of the IRI? And those millions of Iranians who participated in Ayatollah Khomeini’s funeral when that BBC commentator described the funeral as the hugest spontaneous one in the history of mankind with an endless black sea of people expressing their absolute support to the revolution that he led more than 10 years ago!!!

Again, I don’t like to have this sort of discussion, I only cognize one fact, racism is an ugly disease and this disease is endemic in Iran . Iranian Persians are generally racists even with other Persians like Afghani Persians. In the western countries, the majority of Persian Iranians present themselves by saying “I’m Persian” instead of saying “I’m Iranian”. Ironically, they get furious if an Iranian Arab presents him/herself saying “I’m Arab” or if a Persian Afghan says “I’m Persian”. These screaming double standards are matters of reality obviously in a funny way. Having said that, I would never deny that racism is everywhere in the Middle East, but never as bad as in Iran . If there are many Arabs who hate Iranians then beyond dispute, they would be the Sunni extremists who hate Iranians just because they are Shiites. Those extremist Sunni Arabs cry! and shout for the rights of the Sunni Persians while whishing to eliminate Shiite Persians from existence, another disgusting form of racism.

For all of these reasons, I have never felt that I was in the capital of my own country whenever I went to Tehran. How could I have this feeling when Tehrani people treat me badly only because I’m an Arab!!! I always felt as a stranger there. I really didn’t have this feeling in Sydney, Australia after staying there only for a couple of weeks!!! I have never felt that I belonged to Iran or Iran belonged to me as a nation. Once and for all, as the vast majority of Arabs in Iran , I have not ever felt that I’m Iranian.

There was only one very big reason for Ahwaz to stay within Iran , that was religion. The loyalty to the religious leaders and the fears (among people) of being apart from an Islamic state and the religious enthusiasm. When this reason is no more, then no single reason, what so ever, has left to continue this humiliation.

I have no, even one in a million, doubt that Arabs in the current Iran will choose independence because I know my people very well. I don’t need to justify the choice of my people in Ahwaz to separate from Iran and have their independent state as this choice does not need any justification as per liberal democracy. Even without the big problem of racism, my people are extremely keen to be the same as all the Arab states in the Gulf. They always compare their miserable circumstances in Iran , in all terms, with the wealth and prosperity of the small Arab states in the Gulf like Kuwait and Dubai. Historically those Arabs (in Kuwait and Dubai) were extremely similar to them in every aspect of life. Unlike the urban Arabs of Damascus, Baghdad or Beirut, Arabs of the Gulf (including Ahwazis) had their own life style which was different from those living in the old mentioned cities. Moreover, they share the same tribes and many of them have relatives in all of these states. There are, actually, direct cousins some of them have the Iranian citizenship and others hold the Kuwaiti. The difference in the level of life between those cousins in Iran and Kuwait is extremely obvious.