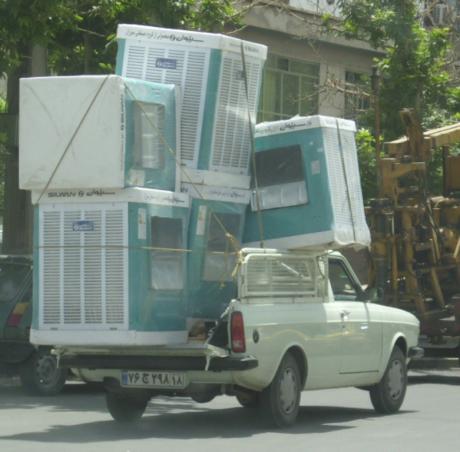 I was reading JJJ’s blog on Jainism and one statement caught my attention; In the summer of 1979, I was a 17-year-old empty vessel swimming in a sea of ideas unleashed by the revolution, from revolutionary Shiism to Marxism.

That’s a true statement and reflective of those times.  I remember those days.  We were all young and political activism was the way to go, everybody was doing it! Political groups were flexing their muscles and had newspapers, rallies and leaders who were long time political prisoners.  Political debates were hot and people were staking a claim to the revolution like American pioneers staking a claim to a piece of land during the Western expeditions.

Then came Saddam’s attack and everyone focused on the war and for a while these political groups were still going but as the war dragged on and parliament bombed and other assassinations, regime started a brutal crackdown and managed to silence everyone and all political groups closed down shops and people went their own way.  The brutal crackdown worked back then.  The movie Persepolis by Marjane Satrapi is a good reference for those days.

I was thinking of writing a blog about going from revolutionary Shiism and Marxism in 1979 to Jainism 30 years later!  Not that there is anything wrong with it … Nowadays many people are ashamed of their past political affiliations and those who aren’t and say something are chastised and labeled as traitors or leftists supporters of the Islamic regime who betrayed people and sold them to the devil.  As if their opposition would’ve made a difference.  In the end wet and dry were all burned. Today the old political groups are gone but political activism is re-born with newer groups and names like Shirin Ebadi and others who have shown their support and are well known.  Regime’s brutal crackdown isn’t working this time.

Then I came across Siamak Baniameri’s article about why the Green Movement is doomed based on Project Management “principles”.  I like most of Siamak’s articles from the years past but ever since this summer and the election crisis I find many of his articles odd.

Going back to Shah’s opposition and Khomeini as a point of reference, it is a known fact that Shah feared communists and not Khomeini.  Shah’s opposition had a strong diaspora organization called Confederation that was an umbrella for small and large political groups of all kind that was later disbanded when Khomeini came along.  I’d put the main groups in 3 general categories; leftists, Jebhe Melli (nationalists) and Annjoman Islami (Islamic students organization).

Siamak calls the 1979 revolution a project and Khomeini as its Project Manager who explained the project to “the team”.  These days there is a project management course in every curriculum from becoming a dental assistant to criminal justice.  It used to be that project management was a specialty that started in US military and mostly associated with construction or production projects with excruciating details, Gantt chart (a chart that depicts progress in relation to time) or PERT (Program Evaluation and Review Technique) chart, milestones, dependents and precedents and finally a fixed time or duration for the whole project.  Now they certify you if you take one or two classes with a glossy Project Management book and then you can go and apply the “principles” to everything from having a weekend project planting tomatoes in the backyard to Iran’s green revolution or lack thereof!

So ok let’s apply those project management principles.  Back in 1979 did everyone like the project manager Khomeini?  No.  Did Khomeini planned the 1979 revolution and executed the project plan accordingly?  No he was a man without a country. He was exiled to Iraq and when Saddam kicked him out he went country shopping and ended in France and by the time his visa was expiring the (confederation) opposition leaders had found him.  Imagine while going through your immigration paperwork you get deported and suddenly you’re given the opportunity to become the new leader of Iran!  Sweet!  Now this is a shortcut version but based on Siamak’s shooting from the hips, it is good enough!

The green movement has leaders in Mousavi and Karoubi whether some like them or not.  They are the most visible or defacto leaders who by default have accepted being targets of terror assassinations as Mousavi’s wife has stated recently.  If they die someone will pick up where they’ve left off.  Likewise if Khomeini was assassinated someone else would’ve sprung.  I know some say the green movement’s goals have gone beyond Mousavi and Karoubi but they ignore their influence.  Some of us shun them yet we can’t wait to hear what they have to say next!

They have no choice but to go with the flow.  When Lincoln issued the emancipation proclamation did he plan for it?  No the civil war was based on federalism vs confederacy and more states’ rights vs federal rights. Slavery would’ve been abolished one way or another but it became in focus during civil war and was abolished once the cause of federal rights prevailed.  Now I don’t know if Mousavi is going to be Iran’s Lincoln (Lincoln’s body is rolling over in grave 🙂 I just wanted to mention that not all social events are exactly planned in advance but the just causes out there will come in focus and gain the attention and actions that they deserve.

Since 1979 so much has changed in the world stage and changes in Iran are inevitable.  Something positive will definitely come out of the green movement and it is certainly not doomed to failure.  The regime (like a bad project manager 🙂 is not able to stop opposition from coming to streets and people are fed up with corruption over all these years.  Other factors such as economic hardships or international relations will come to play later.

The 2 main slogans of the green movement are Death to Dictator and Allah-o-Akbar, just like during monarchy.  There are other slogans that come up based on current events like Azhari the calf, cassette tapes don’t have legs during Shah and Vasiyate Montazeri, marg bar een diktatori (Montazeri’s will, death to this dictatorship) now.

So things will change and this may not be a text book revolution project with pre-approved leaders that some people are looking for nor is it nothing or a riot which is how regime and its supporters would like to frame it.  Some argue that the green movement is a continuation of a movement that started in 1905, with milestones in 1953, 1979, 2009 and counting.  Green movement is a popular movement; it has leaders and the momentum.  It is certainly not a weekend project!

Photo caption: an uncertified Project Manager is involved somewhere in the project