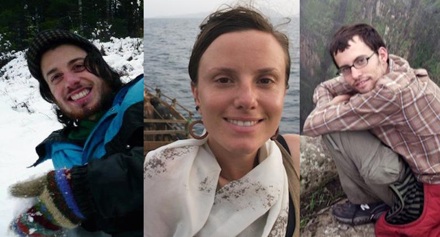 One evening last week at the Free Library of Philadelphia, I met Alex Fattal. I saw pain on his face, as he came up to me. A nice, kind young man, he told me who he was. I learned that he is the brother of Josh Fattal who, along with two of his friends, was on a hiking vacation in Iraqi Kurdistan before they were arrested by the Iranian authorities. This was in July, now it is February, and they are still in prison. Evin: Where else? The mothers and the families of Shane, Josh and Sarah have had no direct contact with their loved ones. No phone calls, nothing. They remain anxious, worried but still hopeful that they will be released soon. It’s been a long excruciating six months. In a statement released in August 2009 by the fourth hiker, Shon, who, due to illness, had not joined his friends on the trip: “I hope that people understand my friends’ presence in the area for what it was: a simple and very regrettable mistake.”

Mother of Shane, Cindy: “Shane has a major in Peace and Conflict Studies in addition to his minors of Arabic and Journalism degrees. What is important is that Shane is a compassionate human being who never intended to enter into Iran and who means no ill will to anyone.

Shane talked about this trip with me and his family for weeks before. He said it had been recommended by friends and it was safe. Sarah only had a week off of her teaching job so this was scheduled to be a short trip. It is heartbreaking not to have any contact with Shane and to have no independent verification of his condition for over three months.

I feel helpless at times. I ask the Iranian authorities to please end this nightmare for us and release our children. This situation has taken its toll on our family. We continue to plea that this be treated as a humanitarian case and kept separate from any politics. We are a family; we are not involved in politics.”

Mother of Sarah, Nora: “My daughter Sarah was born in Oak Park, Illinois. She graduated from Cleveland High School in Encino, California. In 1999, Sarah moved north and attended the University of California at Berkeley and graduated with degree in English Literature. She taught English as a second language there. She and Shane decided to live in the Middle East, to further her Arabic studies and learn more about the culture and its people; as she would say: ‘people just like us.’ She and Shane had been living in Damascus, Syria for a year. She had a teaching position at the American Language School there and was on a brief vacation when they both went to Kurdistan for a respite from the city to a place recommended by their friends as one of the most beautiful places in the world.”

“We ask the Iranian government to be just and compassionate towards our beloved children. They have been punished enough by the prolonged detention and we, as families have been punished along with them. Please make the ultimate magnanimous gesture behooving the greatness of your country and release them to their families.”

The Mother of Josh, Laura, tells the full story:

What happened? How did they end up in Iran?

Josh, Shane and Sarah were on a one-week vacation in Iraqi Kurdistan. They left Damascus on July 28th where Shane and Sarah were living for the past year and Sarah was teaching English. They traveled north from Damascus to enter Iraq and visited the Kurdish cities of Arbil and Sulemaniyah. They slept in Sulemaniyah on July 29th and then hired a driver on July 30th to take them to Ahmad Awa. At 1:33pm on July 31, they were arrested in the unmarked border area of Ahmad Awa in Iraqi Kurdistan.

Don’t you think it was dangerous to even go to the area? Were they not told?

Shon Meckfessel, the fourth hiker who was sick the day before Josh, Shane and Sarah traveled to Ahmad Awa, stayed in Sulemaniyah on July 30th. Shane called Shon at 1:33pm on July 31 to tell him to call the US Embassy in Baghdad to alert them that Josh, Shane and Sarah were surrounded by Iranian authorities. Shon and Shane had been researching areas of Iraqi Kurdistan to hike and vacation in before the trip. Friends had told them that the mountains and waterfalls in this area are just beautiful and picturesque. They did not think it would be dangerous and in any case they had no intention of going to Iran.

What was the reason being given for their arrest?

I don’t know and I don’t understand. The Iranian government officials said because the hikers entered the Iranian border illegally. But nothing was marked and the hikers had no intention to go into Iran. They were just young people who were off from work and wanting to explore a beautiful area before going back to Damascus.

Have you been in touch with any one of them since their arrest? Do you know what their condition is at this point?

None of us have had direct contacts with them. We know that the Swiss ambassador visited them on two occasions once on September 29th and October 29th for about one hour. They had been held in solitary but moved since. I believe they are in ward 209. We were told that they seemed to be in good health. But as you can imagine no Iranian or American mother wants to hear that their child is in captivity. It is particularly disturbing that our children have had no access to their lawyer.

Have you tried to get visas to go to Iran? What is the reply from the IRI officials?

We have not heard anything if our visas have been approved. Officially, it takes a month and as you can imagine we are eager and waiting to hear back. It would be a great relief for us to see our kids after six months of no communication at all with them.

What is your plea to the Iranian government?

We are asking that Josh, Shane and Sarah be released on humanitarian grounds. We ask for mercy and kindness. We want to see our children back home. Six months detainment is punishment enough for any alleged unmarked border crossing. We know that Iranians are compassionate people and I personally have great respect for your nation.

What are you asking ordinary citizens and governments to do?

We want people to write to Josh, Shane and Sarah. We want people to hold vigils and make YouTube videos. We want the international community to come to our defense and ask the Iranian government to release our children so that they can come home to us. We want compassion from religious leaders. Josh, Shane and Sarah are just ordinary young adults who were exploring the world. They are caring individuals. This is a humanitarian issue unrelated to global politics.

For a full story and how to help visit: www.freethehikers.org