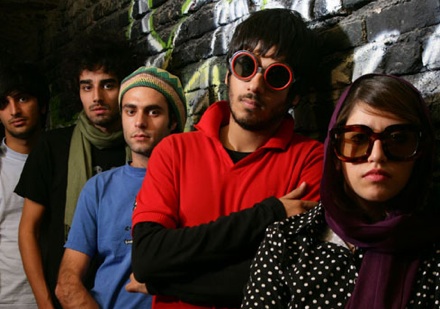 Rolo May once said creativity arises out of the tension between spontaneity and limitation. Bahman Ghobadi’s most recent work portraits how this is manifested in the day to day life in Iran, in particular in that of the Iranian youth.

No One Knows About Persian Cats opens with Ghobadi recording a Kurdish song in an underground recoding studio in Tehran. This is his only cameo appearance in the entire film. On the surface, the plot is simple. Ashkan and Negar, two young musicians are looking to form a band and dream of taking part in a music festival in Europe. Yet this semi documentary is anything but simple. In this work, Ghobadi zooms in onto the life of Tehran’s youth through a musical lens.

Taking us on a whistle stop tour of the Iranian underground music scene, Ghobadi canvases various music genres ranging from heavy metal and rap to rock and traditional. Although undeniably about the music scene, this film is also about much more.

Shortly after the main characters are introduced, we meet Nader, a charming, entertaining and vivacious young man who seems to have figured out how to work his way through the system. He quickly takes on the role of manager/ agent for the two musicians. It is through their trawl of underworld of the contemporary Tehran in search of other band members as well as people who can facilitate their escape from the clandestine existence, that we are able to slowly paint a picture of how no aspect of Iranian life remains unaffected by the countries Islamic laws.

The, at times, humorous search through Tehran serves as a testimony to the ingenuity, entrepreneurship and resilience of the Iranian youth. There is no shortage of resourcefulness as we watch how a cow farm in the middle of nowhere is used to rehearse heavy metal music in order not to get arrested, or how a living room in an urban house is used as concert hall, because the female vocalists could not obtain licence to perform in public.

Artistically the movie creates a beautiful rhythm of dialogue and music, often weaving together a harmonious tapestry of visually colourful pictures of Tehran scenes with the music. The plot is set against a backdrop of urban life, juxtaposing shots of the destitute and the affluent to remind the viewer of the paradoxes of the Islamic metropolis Tehran has become.

No One Knows About Persian Cats was filmed before the controversial June elections and before the start of the anti government Green movement in Iran. In light of recent developments, this personal story provides a humane glance through a small window into the life of ordinary young Iranians. In a touching scene towards the end of the film the five members of the band are sitting on the floor sharing a pot of soup as they take turns in telling each other about their dreams. Each in their own way talks about their wish for basic freedoms to, as they put it , “do what they want.” What they want is to be able to play music, to obtain permits to perform before an audience, to have their parents amongst the audience, to be able to travel and go see their favourite bands play, all basic freedoms we in the West take so much for granted.

Expect to walk out of this experience with your senses fully satisfied. What a way to introduce the Iranian underground music scene to the world!

Where can I get the soundtrack?

The film opens in 26th March, 2010, at the Curzon Soho, Ritzy Brixton plus other cities in England, Wales , Scotland and Ireland.