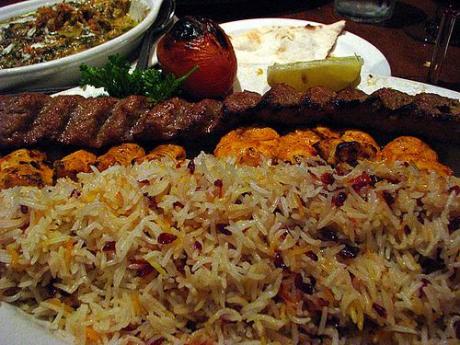 Three colleagues of mine and I went to an all-you-can-eat Persian restaurant yesterday for lunch.  Two of them I recognized immediately, Anoush and Kaveh, but the third one, who was younger than the rest of us, remained nameless in the fringes of my dream.  We packed our plates with various types of Persian food and sat down around a table and began to eat.  A young woman came and sat between me and the nameless colleague.  It was obvious that he was trying to impress the young lady but she was standoffish towards him.  He held her hands in his, looked into her eyes, and whispered something softly in her ear.  I began to giggle.  She pulled away her hands and turned to me and said, “What is so funny?”  She was obviously not happy with my awareness of their little activity.

– Oooo, I’m sorry.  I thought you were comparing the contrast between the colors of your skins, and I thought it was ironic.

– So you think because we are of different colors I’m a sinner or something.

I didn’t care to elaborate anymore.  From the tone of her voice it was obvious that she was in need of some help.  I fell sorry for my young colleague for wanting to put up with her.

The restaurant staff brought some freshly made kabab, still steaming, in a deep oven tray and put it on top of a glass hood that was overhanging a food counter full of other dishes.  Anoush grabbed the tray, looked at us, and said he was going to take the food to his wife.  A horseless chariot driven by a woman approached us, made a U-turn and stopped exactly where we came face to face.  She gave me a smile and waited for Anoush.  He put the tray of food in the chariot, and then the woman cracked a whip and took off.

While I was eating I walked in the restaurant and eventually ended up in an outdoor patio area and took a seat where I was joined by Kaveh a few minutes later.  I ate all the food on my plate and then went for desserts.  Among all the delicious desserts laid out on another food counter I took a liking to a particular one that looked like a pudding made from blackberries.  The pudding was meant to be served in a cup that was made of jelly.  I managed to pick up a spoonful of the pudding but had a hard time putting it into the jelly cup.  When I returned to my seat Kaveh told me we have to hurry up.  “Grab some fresh fruits before they close.”  He said with a sense of urgency in his voice.  By the time we finished our desserts and went inside, the restaurant employees were getting ready to close down the place.  Kaveh said forget about fruits; just grab some more kabab, which now the leftovers were piled up on another food counter at the corner of the restaurant.  Since they had already picked up all the utensils, I tried to scoop up some rice, which was dumped on a large tray, with a bowl that I was going to use for fruits.  The bowl pushed the pile of rice backward towards a wall.  At the end I only managed to grab a small amount of rice with a lot of tahdig.

Kaveh was saying again that I should hurry up and not to be wasting so much time.  I put some kabab on top of the rice that was on my bowl and moved along.  The anxiety of being rushed caused my penis to harden, which on its way upward it got stocked sideways between my pants and the upper part of my right thigh.  I felt the warmth of my penis on my skin.  Kaveh told me to grab everything I could and take it to go.  I was looking to see what else I could grab, but most everything was already being taken away.  An exit door opened and Kaveh began to walk towards the light that entered the restaurant through the partially opened door, and then at that moment I ejaculated.  The clock on the table by my bed read 5:14.  The sheet that covered me was wet.  I went in and out of sleep a couple of more times till I finally woke up an hour later.

Never before have I had a wet dream trying to eat Persian food.