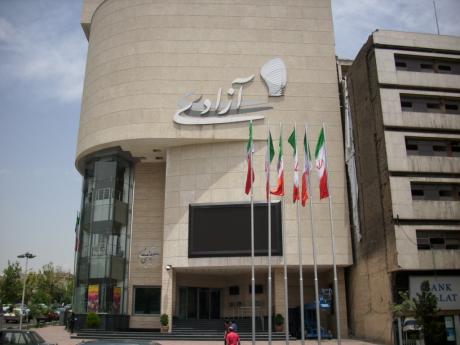 For Iran, freedom of expression series

Freedom of expression like Freedom of Media or any other freedoms in Iran is reserved only if you fully support the Islamic Republic.  If you close your eyes, mouth and mind then you’re free to do anything they want.  The best film makers, poets, authors and artists find ways to circumvent the censors and spread their message under their radar.

They even manufactured a supreme leader to tell you what is free and what isn’t.  They follow the supreme leader and they want what supreme leader wants.  Even if they don’t get what they want they say that’s ok we weren’t sure if we really wanted it in the first place!

Islamic Republic compares itself with US, and other countries in the world in just about any category.  They like that.  It makes them look more important and note worthy.

When there is photographic proof of police in police uniforms destroying property (forget lives) and simply smashing cars, houses and apartment doors and windows with their batons they just ignore it.  They don’t even bother to say it’ll be investigated.

When they shut down the internet, satellite TVs and telephone lines to overseas, they don’t even acknowledge and simply hide their heads under the snow like a quail.  When they’re asked why people are being killed and tortured in prisons so much so that the supreme leader closes the prison, they say torture is forbidden under the constitution.

There is a new generation of Iranians who have come of age.  In school they’ve been taught to be good.  They are taught Islamic Republic is a republic and people have choices.  The best and brightest students are often brainwashed and singled out to be trained as just brainy kids loyal to the system.

When these kids leave the schools or colleges and start their careers and lives they’re face with restrictions and lack of freedoms at every corner.  They see corruption being called support of the system.

Iranians would never leave or have the desire to leave their homeland and families in such large numbers if things were as rosy as Islamic Republic would want us to believe.  They simply cannot control these millions of young Iranians (professional or otherwise) anymore the way they wanted it.

Freedom in Iran is a joke and whether you are for or against the system that much is clear.  Everyone deep down knows there is no freedom but outside they just pretend and fight you tooth and nail and again compare themselves to USA and other countries.  The comparisons are always one sided and often blindsided.  Freedom of expression in Iran is condemned but life goes on.  Life goes on without freedoms and the hope for better days.

Photo caption: the Azadi (Freedom) Cineplex theatre in Tehran.  This theatre was built in place of the old Sahahr-e Gheseh Shahr-e Farang theatre in the old Takht Tavoos street.