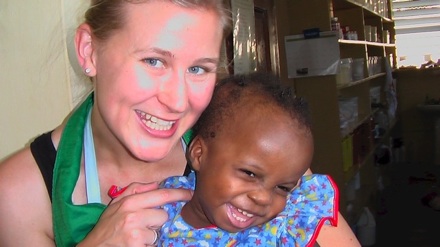 My daughter often asks me why I talk to strangers — the answer is, that is how I get a chance to meet my loved-ones-to-be. One of my dear friends, found completely randomly, is a woman by the name of Sarah D. I met Sarah in 2006. At the time, she sold lettuce at the Burbank Farmer’s Market and we struck up a conversation over arugula and dill. One particular morning, Sarah was positively beaming. She showed me a picture of a little girl named Augustine whom she had just met in Haiti [photos]. Her love for Augustine was contagious especially when she shared her pictures … but let me get out of the way, and let you hear Sarah’s story directly from her.

I first met Augustine in August of 2005. She was very malnourished and left at the gate of the orphanage that I volunteer at in Haiti. The Sisters (Mother Teresa’s order, the Missionaries of Charity) estimated that she was about a year old and she weighed about 6 pounds. Her body was extremely wasted and frail, (all the fat was gone from around her eyes even) and she could not sit up. Yet even then there was a feistiness to her! The first few days she was at the orphanage, the Sisters tried to feed her porridge and she would NOT have it! She wanted rice and beans! But she was too weak to make the effort to eat. I arrived a few days after Augustine was discovered, and the Sisters asked me if I would be willing to feed her a grain of rice at a time. It was a painstaking process because she would spit out the rice if we gave her too much…so it would take me about 2 hours to get her to eat a bowl of rice–but she would always eat the whole thing! 🙂 I could not believe it!

I left Haiti about 2 weeks after meeting Augustine and I just couldn’t get her out of my mind! I was pretty sure she would die before I saw her again–there are many sick children in the orphanage and I couldn’t imagine how her immune system or her body would be able to recover from the state that she was in. After a few days of missing her and thinking about her constantly, I wrote her a letter and put it in my photo album from that trip. It was a “goodbye” letter, saying just how unfair I thought things were and how sorry I was that somehow the greed of my own country contributed in some way to the poverty of hers. I also prayed for her a lot, and I prayed for the mother who made the agonizing decision to leave her at the gate. But I didn’t have much hope that I would see her again.

I went back to Haiti for Christmas in 2005 and I didn’t even ask the Sisters about Augustine because I had assumed the worst. I had looked in her previous crib in room 1 and didn’t see her. However, one of the Sisters came and found me later and said, “Ms. Sarah, your baby is waiting”. And I was like, “Which baby?”. And she said “Augustine”. I cannot even describe the emotions that flooded my heart at that moment!! It was a mixture of total disbelief and pure joy! The Sister led me to room 2 (Augustine had been promoted…the sickest children are in room 1 and they move up to room 5 as they get better and better). There in a crib with her little hand clutching the side of the crib to help her sit up, was my beloved Augustine! She was eating a banana that seemed bigger than her little arm!! 🙂 It was a beautiful moment. She had a terrible respiratory infection at that time, so I spent a lot of time with her, putting washcloths on her feeverish body and holding her while she slept. We’ve been friends ever since!
(Augustine eating a banana all by herself.)

I’ve seen her several times over the past five years. This year it was with such gladness that I learned she had started school. (She is still very tiny–wearing size 18 months at 5 1/2 years old…and developmentally delayed because of the severe malnutrition.)  She was so interactive and talkative this Christmas (2009) and it just blessed me to see how well she has done in spite of the odds against her!

Augustine is HIV+ but she gets regular antiretroviral treatment at the orphanage. She did survive the earthquake and has been causing all sorts of trouble (since schools are still cancelled!). She also is a budding artist, and VERY proud of her work. Both this year and last year we have done art projects with the kids. When we hang Augustine’s masterpieces up on the wall, she just stands there beaming and admiring her work. If I’m away from her for longer than 5 minutes, she will come and find me, pull me by my skirt to where her artwork is hanging and sortof bashfully say “I made that”. Of course I must ohh and ahhh over it like the proud mom that I am! 🙂

I so wish I could bring her home!!!! But for now she is in the process of being transferred to a children’s home in Haiti outside of Port-au-Prince. The structure that we volunteer at survived the quake but suffered significant damage and needs to be torn down. So they are sending the children to other homes until they can rebuild. I’m hoping that I will get to see her when I arrive in Haiti on March 14th…I know they have only 40 children left at the Sisters place and I do not know if Augustine is one of them. So once again I release her into God’s hands and wait in hope to see that precious smile again!

I (Zahra) can’t help but smile when I see this picture of Augustine and Sarah [photos]. I hope it does the same for you. Now that you have met Augustine and Sarah, you know why I consider them loved-ones. The Sisters at the orphanage have an iron-clad rule — no money solicitation on behalf of the children. Instead of a donation, let’s form a web-family for Augustine and wish her well as she navigates through life. Perhaps as a niece, nephew, cousin, aunt, uncle, sister, brother, grandpa, grand ma (you pick your part), you might even have something you want Augustine to know, a truism. Feel free to leave her messages here. I will start with one:

ZD: There may come a time when you are chewing a gum, a sweet one like a Juicy Fruit and you think, wow this experience can only get better if I swallow it. Well, you might not have your mind say that, but mine did and a) the experience doesn’t really improve because the gum is gone and b) don’t worry your pretty little head, if you did swallow the gum, you will live to tell tales just like yours truly.

Sarah, as you continue with your visits to Haiti, please include us in your journey.

Augustine, when you grow up and read this, we hope you feel our love coming your way from all parts of the world. [photos]