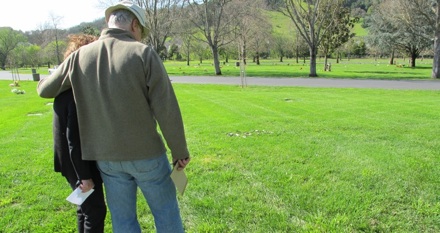 I visited my Ammeh Parvin yesterday. She lost Latif Ramazan-Nia, her husband of 63 years, less than a month ago. I had tremendous respect for him. He had a dignified, no-nonsense manner with a generous heart. When I was growing up in Abadan, to me he symbolized professional success. He had the air of a leader and WAS a leader. In the late 1960s he was the head of the largest refinery in the world in Abadan — and the first Iranian in that position.

My cousin Nersi drove us to the Valley Memorial cemetery in Novato, less than an hour north of San Francisco, to visit Uncle Latif’s grave in a green plot surrounded by hundreds of other Iranians. “There would have been a lot fewer of these graves if the revolution had not happened,” I heard someone say. So true. At least they would have died in their own country >>> see photos essay