Does it make you uncomfortable to laugh? 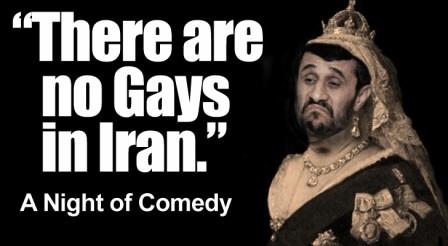 I am looking forward to an exceptional opportunity tomorrow night to support Iranian.com and to watch four very talented and very funny Iranian comedians onstage in San Francisco. It isn’t everyday when such opportunities present themselves! Many Iranians get uncomfortable talking about sex, even heterosexual sex and sexuality, let alone homosexuality! Just the same, I was surprised to learn recently that Mahmoud Ahmadinejad is not the only one who thinks there are no gays in Iran. Of course when I read some comments in a recently published blog, the commentators didn’t come out and say “there are no gays in Iran,” but they said things that are in the exact same vein as what Mahmoud Ahmadinejad said–that homosexuality is abnormal and as such we don’t have/shouldn’t have “openly-introduced gays with a chosen and publicly acknowledged lifestyle.” Well, to some Iranians having sex outside of the marriage is not normal, either. We have so much to learn. Religion may have a lot to do with this way of thinking, but ignorance has a lot more to do with it, I’m afraid.

Chill Baba Joon! Homosexuals are as normal as the next guy or woman. They cannot and should not have to change who and what they are and how they feel just because we feel uncomfortable with the notion. Many of the gay men and women I know are a hell of lot more loving and loyal to their partners. I know of many gay couples who have adopted orphan children and have loved and taken care of those children better than some negligent heterosexual couples I also know. What makes them really special friends of mine is their having experienced the pain of dealing with discrimination and the better-than-thou attitude the society keeps dishing out to them on a daily basis. That pain and that discrimination makes them compassionate and sensitive to other people who are discriminated against. They have been there.

I think everything about the show tomorrow night is perfect. It is for a cause in which I believe–to help Iranian.com. It features fabulous artists who are rising stars in the field of comedy, all of them extremely funny entertainers. One of them, Mehran Khaghani, is a hilarious and courageous performer who openly admits to being gay, helping the rest of us understand and learn more, if only we are willing. I have seen both talented Tissa Hami (also a contributor to Iranian.com) and Max Amini perform onstage. They are really funny and I can’t wait to see them again. I am also looking forward to seeing funny Amir Malekpour in San Francisco for the first time. I couldn’t think of a better promoter for this show, Iranian.com, a medium that lets ALL Iranians have a voice regardless of our political, social, gender, and sexual orientation and regardless of what we choose to say. I think this is a groundbreaking event all the way through.

I am so excited to be getting together with other Iranian.com readers in the Bay Area for what promises to be a couple of hours of non-stop laughter and a chance to learn and to understand. Thank you dear Monda for all the hard work you have put into this. I’ll be there with my friends.

Here are a few clips of the funny men and woman who will be on the stage tomorrow night. If you live in this area, don’t miss it!

There are no gays in Iran Comedy Show.