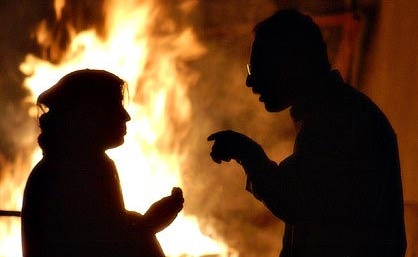 The most significant clash between the two opposing cultures and their civilizations―Persian and American―as foretold by Professor Samuel Harrington in his well-known non-fiction book, The Clash of Civilizations, didn’t really happen on or around the fault lines somewhere in Eastern Europe and spread around the globe as he had predicted. Instead, unpredictably, it occurred, right smack in the middle of Elm Street in, of all God forsaken places, Beverly Hills.

Over two-hunderd-seventy millions of Persian-speaking inhabitants in various countries in Asia: Iran, Afghanistan, and Tajikistan, including those countries where their national language is not Farsi, such as the other four Central Asian countries recently separated from the old Soviet Union―Azerbaijan, Turkey, part of Pakistan―come natural disaster or war celebrate their New Year on March 21st each year. Suffice to say that if the British had not molested India by colonizing it and replacing the seven-hundred-fifty years of Farsi with English as their national language, close to one-third of the world’s population could be speaking sweet Farsi now, celebrating March 21st as their New Year as well. This New Year is called Nowrouz, which appropriately means “New Day.” The Persians take their Nowrouz celebration extremely seriously, particularly if there is a threat to stop them from their festivities, which was attempted by the mullahs’ wicked government after the revolution, but it failed miserably; backfired in a big way—slapped the clergies, to teach them an unforgetable lesson, that never interfere with Persian traditions.

The thirteen days of Nowrouz celebration are kicked off on the eve of the last Wednesday of each year when Persians of all ages, men and women, from all walks of life, without any prior notice appear to become plainly possessed by some power beyond their control. No matter where on earth they reside, as if morally obligated, they arrange three small bonfires several feet apart on an open area, just as the sun goes down, and jump over them repeatedly saying, My yellowness to you, and your redness to me. In essence, they are exchanging their yellow color, which is the sign of sickness or malnutrition, to the red color of fire, which is the sign of health and vibrancy.

Naturally, as soon as the sun disappears beyond the ripples of the Pacific, with the help of her army of children, Bibi sets fires to three fairly large piles of wood in the middle of Elm Street. She gladly volunteers to take the lead and, followed by the rest of the Yazdy clan, jumps over each flame, reciting the words rhythmically. But just before everybody is about to get the hang of it, in response to numerous phone calls made to the city’s fire department, police, and FBI by scared and bewildered neighbors, soon the deafening sound of sirens is heard in the distance, sounding as if they are heading towards Elm Street. Apparently, the Fire Department’s noble intention is to prevent the entire city of Beverly Hills from being engulfed in an inferno set by some crazy arsonist foreigners, who resemble Al Qaeda’s operatives in the United States. Sooner than Bibi and her troops have time to do the fourth round of jumping, there are four fire trucks, three ambulances, and six police department squad cars, plus a military armored vehicle loaded with heavily armed fiercely-looking men from Special Forces, clad in bulletproof vests. The vehicles’ red, blue, and yellow flashing lights illuminate the multitudes of spectators gathered in front of the Yazdy house. They surround the bonfires and the “subjects”―the terrorists, Bibi and her gang. Twenty Special Forces men jump down from their armored vehicle and take position, one knee on the ground, the barrels of their guns pointed at the “subjects.” They are ready for a command from their Captain to fire. Behind them, the firemen are also prepared to target Bibi’s bonfires with their water hoses. Men and women from the Los Angeles Police Department with guns drawn and pointed at the “subjects” are prepared to do their civic duty and riddle the body of every member of the Yazdy family with enough bullets to make each poor emigrant look like a sieve.

In one of the most anxious moments in the history of Beverly Hills, when the men and women in uniform are prepared to prevent a colossal disaster that could surpass the tragic event of 9/11, everybody is frozen, looking as if they are statues in a wax museum. With nobody moving, the situation seems temporarily under control. Or is it that eerie calm before a volcanic eruption? At least, that is how retired Army General Paterson, the old head of Homeland Security of the State of California, who is present at the scene, assesses the situation. Before the triggers are pulled or the fire hoses opened, Bibi wiggles her way through the crowd, and with help from Farhad she finds Captain Roger, the Chief of the Beverly Hills’ Fire Department. Completely oblivion to the gravity of the state of affairs, Bibi engages Captain Roger in a conversation with a full intention to orient thus elevate the poor man’s awareness of the Persian culture and traditions right there and then.

Thus begins a long process of non-stop communication that could appropriately be described as out of the ordinary, perhaps even bizarre. Right in the middle of street, with hundreds of red-blooded Americans gathered to witness their hard-to-depart-with-taxes in action, with Farhad acting as a professional interpreter, there are graphic explanations in Farsi, peculiar translations into English, abstract rebuttals and counter refutations, bits and piece of cultural rules and regulations are exchanged, traditions swapped, and issues negotiated thoroughly. The dialog is suddenly interrupted when Captain Roger loses his temper and shouts angrily, “Damn it, woman! You need a goddamn fire permit for this sort of dangerous and crazy thing!” Seemingly defeated, it leaves Bibi with no options except to resort to the most lethal weapon in her arsenal, her cooking. She orders the children to dash inside the house and bring out several boxes of cakes, host of exotic munchies, jars of cookies, pitchers of home-made lemonade, paper plates, cups, and plastic forks, and offer them to men and women in uniform courteously. It becomes impossible for of the men and women in uniform to turn down the generous offer from horde of kids with ear-to-ear smiles on their sweat innocent faces. Before washing down a chunk of scrumptious cake in his mouth with a full glass of cold lemonade, an amazing expression of gratification appears on Captain Roger’s face. The poor fellow looks as if he has lost the battle, voluntarily surrendered, and has become enslaved, with his will and mind exclusively belongs to no one except Bibi now. That is when she finds the opportune time to request her fire permit right on the spot. Needless to say, after tasting more sizeable portions of Bibi’s delicious cake, which were undoubtedly baked with ingredients of which are known only to Bibi and God, in a response to Bibi’s request, Captain Roger just nods a few times. When Captain Roger finishes his first round of jumping over the fire and is about to go for the second round perhaps to cover his entire family as well, he faces the reproachful eyes of General Paterson. In response, he mumbles, “You never know, General. Heck, these folks have been around for many thousand years. Who knows, this could have some merit in it. Besides, you have nothing to lose except your tensions.”

It is truly a remarkable sight, indeed a pathetic, but perhaps memorable one to see: grown men and women, some even close to retirement age, in various civil service uniforms, acting as if they have collectively lost their marbles completely, joined by the neighbors, jumping over Bibi’s well-kept bonfires mumbling some incomprehensible words, happily celebrating the coming of the Persian new year as if they all have matching DNA with Persians. Well, considering the ten thousand years ancient history of Persia, when not many people even occupied Europe, could it be possible, or probable, just maybe, or is there a remote chance, that all the men and women in uniforms, and all the neighbors, one way or other, are all descendants of original Persians, but poor devils are not aware of it? Well, who can refute it with any degree of certainly? Maybe this is perhaps one of those unresolved anthropological mysteries that modern science hopefully will unearth it for us in the future, so that the Americans will stop bashing the Persians once for all.