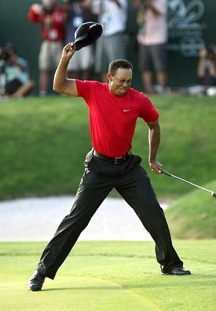 I’ve had enough. Of all that isn’t said, and then what is. One can’t sit at a sushi counter without overhearing people talk about Tiger as if Hiroshima was just bombed. He is the next stop in this salad bar of stale ingredients we now get delivered as the nightly news, passing the baton from Monica Lewinsky to O.J. and MJ. Fed are the insatiable appetites of undernourished people on couches armed with powerful remote controls, changing from one analysis to the next as more journalists dig up revelations. So he proclaimed his apologies and hugged those that are willing to forgive, or at least identify with him, on camera. Now that he’s on the path to righteousness, the apostles show up for supper. This public confession was a study in earnestness gone rampant. The management at Disney was jealous.

Nothing he said was unscripted. The speech was read as if he were on trial and in desperate need to prove his innocence, facing a life of prison. The humanity that could have been mustered is entirely repressed and Hallmark supplies the words, via a team of lawyers and publicists. “I am whatever you say I am.” We see that he’s just a kid in over his head, only because he hits so far below par. He is asked to apologize for damaging the economic system of corporate sponsorship that needs a trusted face to entice you with more of what you don’t need to live a fulfilled life. The clear-headed who aren’t weighed down by Judeo-Christian mores aren’t allowed to say that his one mistake in all this was getting married.

Tiger tells me with swollen eyes that people want to know why he would do this to his family. Who else hires Vegas strippers in $7,500 a night suites but a thousand other men and women exactly like Tiger? The guy is bombarded by a slew of money-grubbing sex kittens on an hourly basis. Alas, he fell. The same people who raise daughters that do these things to powerful men are pointing their fingers at him with venom.

Tiger is being reborn. It is the typical metaphysical transition, from megalomaniacal nymph to religious hypocrite. Again and again Tiger tells me, on the verge of something that might be tears, that he has disappointed me. Indeed, but not in the way he means. His apology never gets to the heart of the problem. My disappointment lies in his inability to tell the world to buzz off, to leave his family alone. He could afford to do what astronomical success in the culture of Gomorrah promises. Perhaps this was why he perfected his golf swing to this extent, knowing full well that he wouldn’t have to be the geeky guy in the corner trying to score a date at a happy hour in a suburban mall’s Mexican cantina.

The fatal flaw lies in his postlapsarian striving to appear media perfect. He has come out of the cave of sex addiction rehab in a suit (sans tie) to briefly proclaim the shame he feels before he goes back to the clinic to discuss himself even more. Aren’t you bored yet, Tiger? This was his chance to tell the world how shallow it can be. Instead of taking on the confrontation, he chose the Sunday papal route. He never tells the world broadcasters that there are wars going on that they should cover with an iota of the attention they’re giving him. He wants to be a better person, but in that media quagmire his persona can’t find a way out. The audience, most of all the watching eyes of his Mother, sits in meditation and hugs him proudly, as if he hasn’t apologized before. Perhaps the family can’t bear the damage done to their bank account. Admit it. There is nobility to demonstrating wicked honesty. But now CNN is the new kitchen we stand around interminably, after leaving the confession booth. Ignorance has won. Buy Nike.