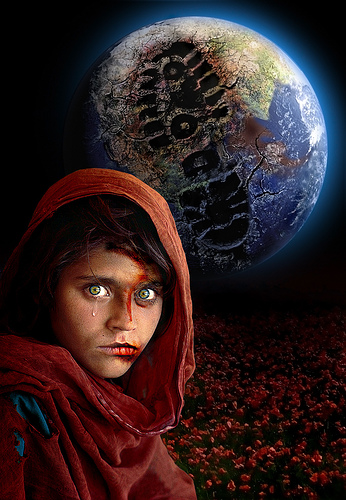 For a while now, ever since President G W Bush, triumphantly landed on USS Abraham Lincoln, in all his masalan ever so Commander In Chief-ish attire [Cheapish more like it] on May 1st lord,s year of 2001 and gave the ever so famous speech in front of an ever so famous banner that said [MISSION ACCOMPLISHED], US of A has been looking for yet another invasion to make.

It might sound rather easy for a supper power [ghardan kolofteh mahale] to find a little kid to pick on and take his lunch money from him. But who is the next lucky victim? The kid with glasses [The Arabs]? Not exactly the bully has them bagged literally.
Who else is in the school hallways [region]?

We have bones to pick with them Eyranians. How about that hostage crisis to begin with. Not that it is a pretty episode in foreign relation of any country to invade sanctity of other countries protected embassy, but let see if we as the MISSION ACCOMPLISHED kind of guy that we are can make that a pretext?

A bit weak since WE as President Reagan sent couple of silver coated Colt 45’s to them boys Rafsanjani and ilk back then to make a deal so them boys in turbans could  just hold on to our hostages bit longer till we put away the Peanut Boy out of the White House. Not to mention them Iran-Contra Afaires thingy and that highly decorated Marines Colonel who is Fox news commentator now.

So we needs other stuff to be able to look like freedom fighter, democracy builders and liberty huger in the eyes of countries that we already bought and sold long ago, namely Europe. We want them boys in them socialist none god fearing European countries to help us with FEW[2 or 3 would do] troops. Problem is though, those people  for some stupid! reason, value lives of their citizens, their soldiers and what nots. Such a stupid notion they adhere to. Of course except that Brown the Brit boy[we miss you Brownie]. But since we as  them Yankees, have got brave men and women coming out of ears, what the heck? Who needs them?

So what is that we, the FREE world need to have to justify bombing the living day light out of yet another country?

Let’s get ‘em on that. Screw the fact that those Eyranian Mullas rape and murder their own YOUTH who are merely asking for a smidgen of freedom to be heard and to be acknowledged. We don’t care about our own bravest and youngest who die in deserts of Iraq and Afghanistan, the most illegal war in the history of humanity, why should we care about them dark haired 16, 17 and 18 year old beautiful young boys and girls who are being killed, raped, imprisoned and executed by dozens upon dozens on the streets and in the prisons of Iran???.

We only want Israel to be safe……….. FUCK the rest of the world, FUCK even our own youth and nation.