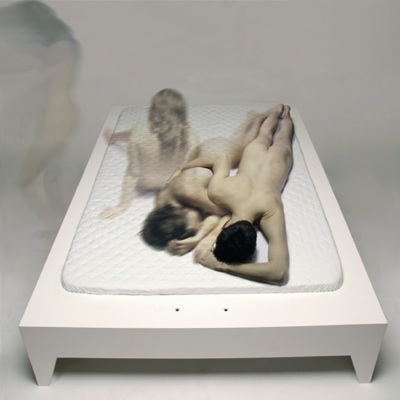 I lit the cigarette and watched the full moon descending over the city. I couldn’t stop thinking about Mohsen and his last love. That woman. There was something haunting in her voice, and that’s why I was tempted to believe her, a woman who claimed to be loved by the only man who had ever loved me. However every time she called, I just stood there like a fool, unable to say a word or to deny her story. And even if it was all true, why did she need to call me?

I swallowed the smoke and looked outside. The moon had grown bigger and brighter; it looked so close that if I opened the window, I could have touched it and held it tight so it wouldn’t slip behind the Paradise Apartment Complex, leaving us all in the dark. I leaned forward. My breath fogged the glass with smoke.

I slid the window open to air the room so the house wouldn’t stink like Mohsen’s first kiss, smelling like ash and alcohol. The breeze gushed in, and its cold touch took me back to a bridal room with balcony at Hotel Darya, a day when he loved me more than any other day, as if he had never loved with such intensity. A day that all the witnesses, those strangers, called the happiest day of my life.

“Your toes are so cold,” Mohsen whispered, crawling up over me. “I’m going to warm you, but only if you let me.”

But I couldn’t let him, not even after drinking that bitter glass of vodka he gave me. Not at all. I was still afraid, I couldn’t move, but I couldn’t resist either. Mohsen glided his hands under my waist, lifting up my body. I hoped he hadn’t torn my chiffon underskirt. It had taken Ma more than a week to find it in an obscure fabric store in the bazaar, and Pa had paid a fortune just to incorporate it into my dress. Mohsen’s moustache brushed my knees. “Relax,” Ma had advised me. But I didn’t want to relax, the same way I didn’t want to think of the ceremony’s aftertaste or the guests who were late, what they wore and other gossip that made Ma happy, because she wasn’t really happy the night before, frustrated by her messed up dress.

Mohsen’s nails clawed my skin, deep purple stripes forming on my breast, and I remembered how Pa – God bless his soul – had frowned at him the whole evening. If he could, or if it was possible, there would have been an earthquake as powerful as the one that shook Tabas and killed thousands of people, so I’d be a victim among victims, crushed to dust under rolling stones, molded in cement but dying innocent, so Pa didn’t have to hide his dissatisfaction with giving away his daughter and Ma didn’t need to agonize over a missed button, and best of all, Mohsen wouldn’t have reached between my legs.

Mohsen moved up, his bareness pinned to my skin. I took a deep breath, imitating the women I had seen in the movies, wondering if I looked as pretty as any of them. The fridge hummed and the shower leaked drop by drop, like being in any ordinary place or time, and it gave me goose bumps. Rocking back and forth, I watched Mohsen sweating. From this angle, he looked like a stranger scowling at me, like Pa who always scowled when he did things he didn’t know how to do; sawing a useless piece of wood, or struggling to tighten a loose screw, or smashing a nail, but nailing it on the wrong spot. Mohsen crept forward, bit me and I bit him back, for the sake of equality between men and women, wondering how much longer it was going to last.

The blanket slid, and the sheet covered half my face. He kissed me and his tongue shoved the fabric in my mouth. Someone sang a drunken song in the hallway, and I felt like choking. I turned my head and inhaled through the entangled sheet, pulling him in, holding him tight, as everyone expected. “My bitch,” he whispered gloriously, making sounds like those filthy pigeons chilling out in our balcony. He moaned, uttering meaningless words, or maybe just insults. I opened my eyes, not yet aware of the contagiousness of love and looked at him, astonished by this lewd explosion inside. He was falling asleep, exhausted, or pleased by his own narcissism, reeking of sex and alcohol, still weighing on me.

Ashes burnt my fingers. I tossed out my cigarette, or what had remained of it, closed the window hastily, and held my hand under cold running water. The moon had fallen beneath the night, and I was shivering. The city looked peaceful, a rare silence everywhere.

I should be sleeping too, but how could I?