The Besitun Inscriptions, An Open Door to the Past 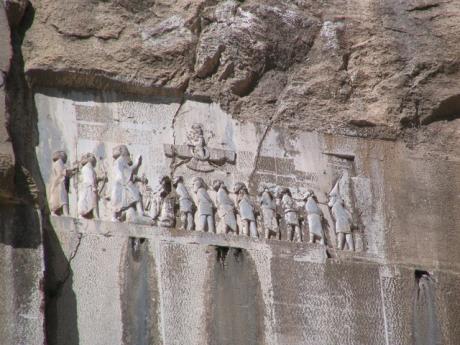 This Behistun [Bhagasthana, meaning “the god’s place or land”) also known as Bisitun or Bisutun in Modern Farsi]Mount is  located above a spring-fed pool of water on the old carven road from Ecbatana to Babylon. The rock is really the last peak (3,800 feet high) of a long, narrow range of mountains that skirt the Plains of Keneanshah on the East. The name Behistun  is derived from the village of Besitun located at its foot.

A large relief (5½ x 3 meters) depicting king Darius, his bow carrier Intaphrenes and his lance carrier Gobryas. Darius overlooks nine representatives of conquered peoples, their necks tied. A tenth figure, badly damaged, is laying under the king’s feet. Above these thirteen people is a representation of the supreme god Ahuramazda. This relief is based on older monuments, further along the road, at Sar-e Pol-e Zahab.

Underneath is a panel with a cuneiform text in Old Persian, telling the story of the king’s conquests (translated below). The text consists of four columns (#1, #2, #3, #4) and an appendix (#5) and has a total length of about 515 lines.

Another panel telling more or less the same story in Babylonian. The appendix (“column five”) is missing.

A third panel with the same text in Elamite (the language of the administration of the Achaemenid empire). This translation of the Persian text has a length of 650 lines. Again, the appendix is missing.

The inscription includes three versions of the same text, written in three different cuneiform script languages: Old Persian, Elamite, and Babylonian. Babylonian was a later form of Akkadian: unlike Old Persian, they are Semitic languages. In effect, then, the inscription is to cuneiform what the Rosetta Stone is to Egyptian hieroglyphs: the document most crucial in the decipherment of a previously lost script.

According to Thompson, R. Campbell: Two of the most important events in the advancement of historical knowledge have been the discovery of the key to the Egyptian hieroglyphics on the Rosetta Stone and the deciphering of the cuneiform inscriptions on the Rock of Behistun. The former opened the door to the Wonderland of Egyptian history, and the latter brought daylight into the dark places of antiquity in the Middle East, revealing to the modern world the vanished civilizations of Mesopotamia in all the truth of contemporary record.” (Thompson, R. Campbell, The Rock of Behistun, Wonders of the Past, Edited by Sir J. A. Hammerton, Vol. II, New York: Wise and Co., 1937, p. 761).

http://en.wikipedia.org/wiki/Cuneiform_script
http://www.mabelvalechurchofchrist.org/gg/vol%2017…
Thompson, R. Campbell, The Rock of Behistun, Wonders of the Past, Edited
by Sir J. A. Hammerton, Vol. II, New York: Wise and Co