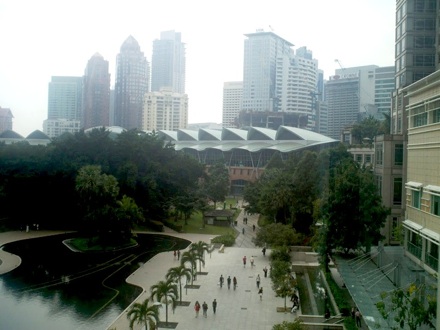 Malaysia, an aerial view
Upon entering Malaysia one would realize that the country is on the move. The infrastructure is first class and new developments are seen in all corners of the cities [Photo Essay]. The people are friendly and can communicate well in English. The ethnic mix in the country consist of 63% Malay, 24% Chinese, and 7% Indian. They all seem to get a long and be in line with the government policies to grow businesses and bring in more capital.  The population appears to follow the “Separate but equal” concept, as one would notice the ethnic division in the country. It appears that the Chinese population runs most businesses and Indians are also taking parts in some areas such as finance and engineering. However, the Malay population is somewhat absent in most of these businesses. The higher ranked managers and entrepreneurs are mostly Chinese Malaysians. Malaysian government has realized that having majority of Malays behind in education compared to their Chinese counterparts will have negative future consequences. To solve this dilemma and balance the population’s income level, the government has adopted a law similar to the United States affirmative action, except in Malaysia the law is to support the majority.

Government appears supportive to all forms of businesses and investments. The plan is to bring Malaysia to the rank of the first world countries in terms of economics by the year 2020. One would see impressive numbers that indicates the proper economic policies to put Malaysia on the map as an industrial, financial, and healthcare hub. Malaysians seem to perceive themselves as the future economic powerhouse of South East Asia, and there are many indications that they are correct to think so. To describe Malaysia and its economic policies in one word, one could use the term “GDP based economy”, where all the challenges and future outlook of the government and its people are based on best economic mix and growth of GDP. That perhaps fits well with the 2020 plan for putting Malaysia on the map as a first world country.

Economy
Malaysian economy has many positive signs. The economy grew an impressive 4.5% despite the economic crisis indicating the government expertise to handle severe downturn. The credit goes to government fiscal and monetary policies that were appropriate for the countries needs.  Government borrowing is growing yearly to support the developments taking place, however they are borrowing from non-inflationary sources and given the liquidity of banking and the financial system along with saving rate in the country, the increased borrowing is not expected to have any negative impact.

Malaysian unemployment rate has been somewhat constant, ranging from 3.8% in 2003 to 3.3% in 2009. Compared to United States 2009 unemployment rate of approximately 9%, Malaysia is doing a good job. However as we have found out, these numbers might not be representing the reality of the unemployment in Malaysia. Firstly, Malaysians are more eager to do the jobs that are not related to their specialties than Americans or Europeans. Secondly, Malaysian government brings in (imports) workers from other countries when the economy is booming, and releases them when the economy slows down. Meaning that they artificially keep the unemployment numbers constant around 3% by counting the employment of non-residents and not counting those when they become unemployed and leave the country.

Cultural Mix
Since Malaysia has three major ethnic populations of Malay, Chinese, and Indian, naturally the country enjoys a pleasant mix of these three cultures. What makes Malaysia an interesting case, it appears that the population is not fully aware about other ethnicities in their own country as they behave more or less as separate but equal. For example a Chinese Malaysian can live and attend school and never come in close contact with a Malay person. Perhaps it’s during college that these parties come together in one place.
[Photo Essay]