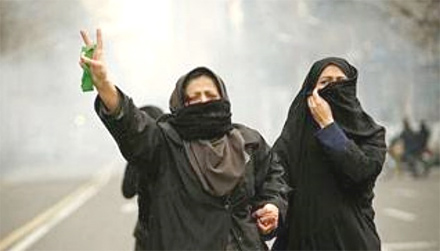 The Iranian regime must have a real sense of humor. In a year when their human rights abuses reached ever lower depths with an exponential rise in political prisoners, prison rapes, torture and executions, the regime tried to get a prime spot on the UN Human Rights Council. Their bid failed. But the jokers had another trick up their sleeves.

Two weeks ago just as a senior Iranian cleric declared that women’s un-Islamic garb – meaning a wisp of hair showing – is the root of men’s immorality and the cause of earthquakes, the regime moved to secure a seat on the UN’s Commission for the Status of Women (CSW). The CSW, comprising 45 countries, voted in by regional blocks, is the principal global policy-making body dedicated exclusively to the advancement of women. Its mandate is “to evaluate progress, identify challenges, set global standards and formulate concrete policies to promote gender equality and advancement of women worldwide.”

The Iranian government by contrast has taken every conceivable step to deter women’s progress and institute a regressive regime against gender equality. In the past year, it has arrested and jailed mothers of peaceful civil rights protesters. It has charged women who were seeking equality in the social sphere – as wives, daughters and mothers – with threatening national security, subjecting many to hours of harrowing interrogation. Its prison guards have beaten, tortured, sexually assaulted and raped female and male civil rights protesters

The Ahmadinejad government has also initiated systematic discriminatory action against women in every other sphere. In universities where women have represented over 60 percent of the student body, the government is now banning women from key areas of study. Childcare centers are being shut down to hamper women’s ability to work outside their homes. Healthcare and reproductive care services provided to men and women, that had turned Iran into a global success story for family planning, are being withdrawn. Women’s publications that addressed gender equality have been shut down. The regime is attempting to erase decades of struggle and progress.

This is not a government that supports equality. It is one of the only governments in the world that continues to shun the Convention on the Elimination of Discrimination against Women (CEDAW) and to treat women as second-class citizens with half the value or legal rights of men. Even on seemingly minor issues, such as the equal right to selecting their clothing, the Iranian government stands against its own female citizens. The morality police and chastity guard are on patrol every day.

Iran does not deserve a spot on the commission; it should earn it by providing Iranian women their basic human rights. Yet on Wednesday, Iran is likely to ascend to the CSW because it agreed to pull out of running for the Human Rights Council in exchange for securing an uncontested seat for the CSW. That it can do so, with such ease, is a denigration of the very principles for which the CSW and UN stand.

It is also indicative of the ways in which women’s rights are continually sold down the river in exchange for political favors and horse trading on other issues at the UN. This is so commonplace among member states that it is rarely remarked upon. But the implications are profound.

First, Iran will claim the win as a major diplomatic victory and indication of an international community that supports and respects it. Second, as a member of the CSW Iran will be well placed to shape the agenda for discussion and the recommendations made. It will bring the same regressive attitudes and cynicism towards women that it enacts in Iran to the global community. No doubt it will have cheerleaders among other nations that prefer to see women as second class citizens.

Finally, as a CSW member, Iran will be well placed to block the participation of independent women’s human rights groups from UN forums, while easing the way for its many counterfeit or ‘government-led non-governmental organizations’ (GONGOs) to participate at the UN as if they are legitimate independent civil society and human rights defenders.

Iran is attempting to control every venue and avenue through which its own citizens reach the world with real news. It is bringing its cynicism and misogyny to the international community. Instead of being challenged and blocked, Iran is making good progress thanks to the inertia of other member states. In Tehran they must be pleased with the likely turn of events. But in New York, this should be a wake up call. If we are to take the UN’s entities seriously, they must demonstrate a seriousness of purpose. Membership in the CSW as with the Human Rights Council must come with minimum conditions.

Iranian women have fought this regime non-violently and resolutely for 30 years. Its young women have been shot and killed on the streets of the Tehran, for the simple crime of being young and female. To have Iran join the CSW will be the ultimate sign of disrespect to them and women worldwide.