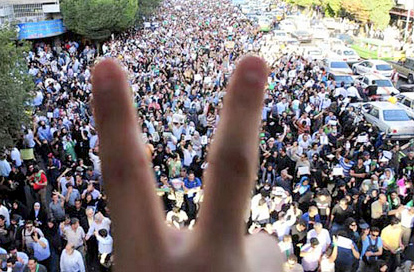 Republican Presidents have occupied the White House for twenty years of the thirty one years that Islamists have been ruling over Iran.

The bane of Islamists, the Iran Libya Sanction Act, ILSA, was signed into law by President Bill Clinton, a Democrat.

The proposed Comprehensive Iran Sanctions, Accountability, and Divestment Act which will replace ILSA has passed both Houses of Congress and is being prepared for President Obama’s signature. Democrats hold the majority in both Houses and White House’s current occupant is Democrat.

The Iraq Liberation Act making regime change in Iraq the official policy of the U.S. was signed into law by President Bill Clinton, a Democrat.

The end of brutal reign of Slobodan Milosevic was accommodated by President Bill Clinton, a Democrat.

It should be obvious where I am going with this. When it comes to confronting Anti-American, rabidly Anti-human being regimes, while Republicans have talked the talk it has been the Democrats who have walked the walk.

Now after many years of cat and mouse games over Islamists’ illegal weaponized nuke and many other criminal acts by the Islamists the passage of the fourth round of United Nations Security Council sanctions is all but a forgone conclusion. So is the ratcheting up the sanctions which U.S. and her allies will be imposing on top of those being imposed by UNSC.

It is my contention for the sanctions to have any chance of success; it has to be accompanied with the following:

1- Like the case in Iraq, regime change in Iran has to be the official policy of U.S. therefore giving fed up Iranians the hope needed to burden the upcoming sanctions’ hardships.

2- To allay ever present fears among Iranians who would love to see the back of the Islamist regime but are afraid of disintegration during its downfall, the U.S. has to publicly guarantee Iran’s territorial integrity.

3- The upcoming sanctions have to be so severe and airtight which would shorten the duration of hardship and increase the probability of success which would make the next step, military action unnecessary.

4- Open-ended material help has to be provided to the fed up Iranian people who actively oppose the Islamist regime in Iran especially the workers in various sectors of oil industry.

With both Houses of Congress and the White House in the hands of Democrats, Iranian people have a fighting chance to overcome their deadly Islamist nemesis.

A democratic victory in Iran would be great news not only for the American admiring, freedom loving Iranian people but for the peace process in the entire ME, the war against the barbaric homicidal Islamist terrorism and for humanity at large.

Make it airtight would you.