Back to the past 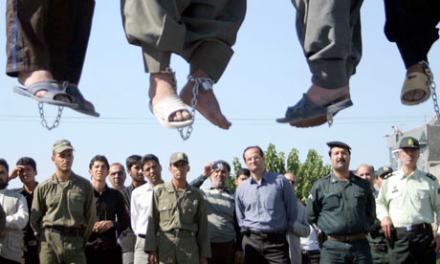 Five young Iranian Kurds were executed last Sunday in summary trials reminiscent of the era that immediately followed the fall of the Shah and the rise of Ayatollah Khomeini in Iran. Even according to government-backed press, the victims had been kept incommunicado for most of their imprisonment and had little or no access to lawyers — a violation of Iran’s own laws. Gone are the regime’s efforts at keeping up pretenses, at casting itself as the authentic but misunderstood regional democracy. The evolutionary clock, which the West briefly believed to have been ticking in Tehran, positively wound down last week. Tehran’s Neanderthals bared themselves to reveal their ancestral constitution, acting precisely according to the dictates of their immutable, reform-defying DNA, and resumed bloodletting.

Iranians who remember waking up in late February and March of 1979 to the startling images in their morning papers of bare-chested corpses with unzipped trousers — executed atop the roof of Ayatollah Khomeini’s residence the night before — recognize the biological references of the last few lines.

Fear of collapse for Iran’s regime is always measurable by the number of heads that fall. Last week, Tehran’s paranoia shot up on the scale, and so, five were executed. It’s the kind of tragedy that can best be relayed with simplicity, even austerity, which Iran’s foremost contemporary poet, Ahmad Shamlu, once captured in the opening lines of a poem:

The news was brief
They were executed.

And so, they were: Four men and one woman, a beloved 34-year-old teacher and social worker among them. Two were allegedly members of an armed group, though the evidence against them was not presented at the trial. Against the other three, the charges added up to a vague allusion to “intent.” They had surely been tortured, for the authorities refused to return their bodies to their families. Besides, they know that there is nothing like a coffin to draw out Iranians to the streets by the thousands.

What distinguishes this particular round of executions from others in the past few years is the swiftness by which it was carried out. Not even the families of the victims had been informed of what was coming. Dispensing with previous, albeit hollow, decorum, the regime refused to abide by its own constitution and go through the motions of a trial. There were no efforts to disguise the process as fair, not even by the shabby internal standards.

Unexpected as they came, the executions were meant to deliver the nation a jolt, a reminder that Tehran has shed all civilized facades. It was a brazen display to which the opposition leader, Moussavi, referred in a statement as the end of the judiciary in Iran and a clear sign that the court systems are nothing but an arm of the state.

The enmity between Iran’s regime and the Kurds is as old as the regime itself. The Ayatollah never had any use for ethnic diversity. When, in the early days after his rise to power, it became clear to him that the Kurds were not about to jettison their distinct heritage for the sake of his dream of a united Islamic front, he called for jihad against them, which he waged both within Iran and beyond, even in Austria and Germany, where prominent Kurdish leaders were assassinated.

But this latest round of executions is about more than the old enmity with the Kurds. It is Tehran’s signal to the nation about what to expect in case of any forthcoming unrest in the weeks ahead, as June 12th marks the first anniversary of 2009 elections. There is an alarming twist to this particular maneuver.

Though the executions are clearly meant to force the Green activists to abandon their anniversary plans, the victims were not Green activists. Tehran would not risk shedding the blood of the Green leaders and hand a coffin to the already charged masses. Instead, it is doing what it has always done best — it leaves those in the spotlight unharmed to chase the vulnerable who are in the shadows. That, too, is an old pattern of the regime’s — a maneuver that was first tested in November of 1979 after the takeover of the American Embassy. When the world’s gaze was fixed on the gates of the embassy where the 52 diplomats were locked up inside, the regime rounded up newspapers and arrested, imprisoned and executed the opposition. Today, once again, Tehran is rounding up old enemies, ravaging the most vulnerable — Kurds, members of the religious Bahai minority, homosexuals, the old political opposition not associated with the Green movement.

And what ought the rest of us who reject such savagery do? For the moment, as the families of the dead are denied the right to mourn their loved ones, we must first heed our most primordial intuitions: Say prayers and hold vigils in their memory. Together, we must deny Tehran the luxury of shadows. We must illuminate all dark spaces, the anonymous faces, by remembering. Simply, even austerely, we must relay the names of the five victims — blog, tweet, text, post, scribe, and shout:

The news was brief
They were executed:

AUTHOR
ROYA HAKAKIAN is a fellow at Yale University’s Whitney Humanities Center. She is a founding member of the Iran Human Rights Documentation Center and serves on the board of Refugees International. Hakakian is a contributor to the Persian Literary Review and the weekend edition of NPR’s All Things Considered.