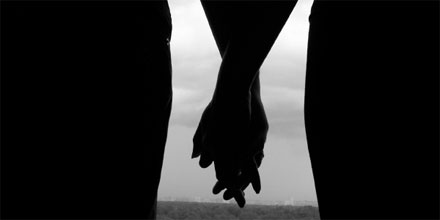 It was a shock hearing Katie so nonchalantly admit that her mother was a prostitute. Why did she think I had to know this so early in our relationship? Couldn’t she break it to me in small euphemisms over time? Now I had to try to deal with it. For a moment I felt the same distress at her frankness that Paul’s inappropriate confessions always gave me.

“I suppose I’m the original maadar jendeh, wouldn’t you say?” she goaded, mocking me for my indecisiveness as to how to react. The confusion was honest enough, but if Paul were in my place he would have blurted out “Jesus Christ, you’re fucking kidding me!” followed by, “Do your Persian grandparents know?“ followed by, “Did they ask him how he knows you’re really his child?” I, on the other hand, was looking for a way to hide my discomfort, and it didn’t matter that my motive was to spare her feelings from conventional thoughts. Perhaps this was a test to see if her shag and shackle scheme had worked on me.

That’s OK, I don’t mind? Too patronizing a response. You must have misunderstood what your mother told you? Unfixable if she insists on the truth. How about the philosophical, don’t worry all women are whores to some extent? Then I would wish I had shot myself in the head instead of in the foot.

I said nothing, but slightly tightened of my arms around her. That’s when I knew I had fallen in love with Katie. In fact the process had begun that first night she had driven me home from the party, perhaps even before. I just hadn’t known it. Whatever she said, whatever she did, whatever I thought of her, I just shut up and held her as though to soak up everything about her. Her story, her thoughts, the warmth of her body inside her blanket, the lilt of her words, that slight trace of the English “mum” when she pronounced the American “mom.” With a loud crackle, a large flame spiked from the log in the fireplace. The dumb log would never know it was aflame, I thought sadly, even after it had burned to ashes. How long had I been on fire before I knew it? And how long before I too would inevitably become a cinder?

“I guess I shouldn’t have told you that,” she said bashfully.

“Did your Persian grandparents know?”

“Jesus Christ, are you fucking kidding me? He married his devoted secretary, that’s all. Though Grandma Fakhri always called her jendeh behind her back, but for a different reason. In Iran all women are presumed jendeh until proven otherwise. Why do you think they go out of their way to look so najeeb? I let you bone me last night. That makes me a jendeh to you. Doesn’t it?”

“Your American passport says, ‘beware of this woman.’”

“And your Iranian passport says, ‘quick to change the subject,’” she smiled tapping me on the nose.

I took her finger and kissed it. “I’m not changing the subject, Katie, I’m just saying it wouldn’t affect my feelings for you, isn’t that enough?”

She dropped her smile. “Time to change the subject, I suppose. Do you like tennis?” she said.

“Screw you,” she said rising to my challenge. “Did you have fun last night, or is that insecure of me to ask?”

“Did you ask the same question from all your boyfriends when you went to Iran for the summers?”

“So you think you’re my boyfriend now?”

“They must have all thought that. Every single one. How many summers did you spend in Iran anyway?”

“What, are you jealous now?”

“Gotcha!” I said. ”Back on the subject of my feelings.”

“Speaking of which, why am I asking you if I was all right in bed? You’re the one who should be asking me?’

“I like it when you catch up with me. Feels lonely when you’re not there.”

“And if I didn’t feel the same way? Would that make me a jendeh for spreading my legs to you?”

“Even a jendeh would rather get paid in love.”

“That’s not fair. I also mentioned love. My subject!”

“Seriously, your mom is proof.”

“And what did you sleep with me for? A good job evaluation?”

“Isn’t that working for a payoff? A jendegi of sorts?”

“A sacrifice for love. Not that I’m complaining. In fact…”

I nibbled her fingertip and chided, “Then why set up a love triangle?”

She rolled away and leaned into the fire to stoke it, picking up the poker in the same sweep. “Maybe I just want to fuck Paul.”

“Bullshit! One wink from you would drop his pants. Even the ones in his closet.”

“Then you don’t know his wife,” she grumbled as she poked.

“Katie, Christie really is sick you know. You should know she’s not pretending.”

She stopped prodding the log and slowly turned to look at me. “Say that again,” she said.

For a few heartbeats she studied my face, then went back to the log, her eyes reluctant to disengage. The firelight began playing on her chin and cheek bones again.

“What?” I asked defensively.

She let go of the poker letting it clang on the fireplace tiles. Then, without turning around she said quietly, “I should know better than anyone that Christie’s not pretending.” Her tone had changed.

I wish I could see Katie’s eyes to fathom her meaning, because I dreaded to think the worst. Did she mean she had something to do with Christie’s illness? Why couldn’t I just be Paul for a moment and innocently ask her the silly question that had jumped to my stupid mind: Katie, did you put a tumor in Christie’s brain?

“You’re burning a hole in my back,” she said in the same ominous tone. “Why don’t you tell me why you came here last night?”

“He invited you and you had to accept.”

A sudden chill ran up my body as though a ghost had blown into the room. Even Tank seemed affected by the eerie frost; his ears tucked back. “You mean ‘he’ as in ‘he persists?’” I said.

Katie scrambled back into my arms again; snuggling tight and clinging like a scared child.”

“I know he comes to your dreams,” she said burrowing with her head into my chest. “He comes to mine too. You’re in them a lot, in a weird way. I think he may be saying he’ll leave me alone if I let you into my life just long enough.”

“Right, your dad has been haunting both of us in his Halloween costume.”

“No, that’s just how he appears to you. There must be a reason.”

“I once dreamt of the real Sherlock Holmes as a child. That’s all I can think of. How does he appear to you?” I said, now starting to be just as scared as Katie. We were clutching each other as though both facing a fearsome supernatural entity.

“Didn’t you ever dream your parents after they died?” she asked.

“We’re Iranians you and me. Aren’t we?” she said. “Our dead parents appear to us, like we were all Hamlets.”

“Katie, they’re just dreams, I don’t care how many scary coincidences there are.”

“Except my dad is only half dead in deep coma,” she went on as though she wasn’t hearing me. “He persists because he’s still part here and part somewhere…somewhere he can come to our dreams and…do things. Do you know what you can do when you’re part in this world and part ghost?”

“Why would your dad want to kill Christie?” I asked.

“But how? You’re talking nonsense.”

“It’s not nonsense! I don’t know, I don’t know what he wants from you, or from any of us,” she snapped on the verge of hysteria.

“Stop it, Katie” I said shaking her. “Your body is turning cold as an iceberg.”

“That’s exactly it! Icebergs. They say we’re icebergs. Islands of hard snow floating separately from each other. I am the tip of an iceberg with a large hidden someone else dangling submerged. But we know better, don’t we?”

“Who knows better? What are you taking about?”

“We who write poetry on each other. Into each other. Our subconscious isn’t just the rest of the iceberg, is it? Please tell me you know,” she pleaded.

Suddenly she slung an arm around on my neck, drew her mouth to my ear and whispered, “The subconscious isn’t just the rest of the iceberg, my love, my yaar; it’s the whole rest of the fucking ocean. We’re one huge undifferentiated stormy soul. Me, you, Grandma Fakhri, that jendeh in Shahr e Now, my dad, alive, dead, half dead. Do you understand?”

For the first time in my life, the woman I was holding in my arms had ignited my soul beyond cindering. I was wrong yet again; Katayoon wasn’t any of the verses I had scribbled on her. That whole night I had been making love to Masnavi in the shape of the most beautiful woman imaginable. “How long have you known the Secret, Katie?” I confessed, a lump rising in my throat.

“Ever since I half murdered my dad.”