“Women Without Men” at Stanford 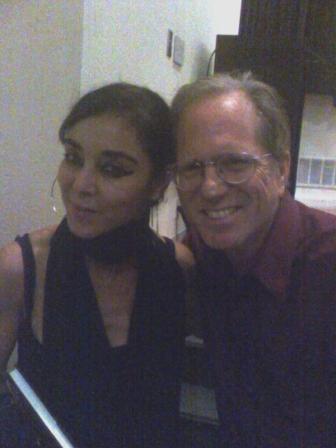 Shahrnush Parsipur wrote the book that the film was based on. She told us last night at Stanford University that the idea for the title came from Hemingway’s Men Without Women.

The film is showing this week at Cinema 12 in San Jose. As Shirin mentioned, the film had to be produced in Europe because of the general lack of interest in Iran in the USA (except of course as an oil resource.) It was shot in Morocco because most of the cast cannot enter Iran thanks to the IRI.

The San Jose Mercury critic already panned it in this morning’s paper as being depressing and only interesting to Iranians or those who follow Shirin Neshat’s artwork. Don’t you hate critics? Could one of them produce anything creative let alone win a Golden Lion award at the Venice Bienniel Film Festival?

Her departures from the novel included grounding it more in the Mossadeg Nationalist movement and 1953 coup d’etat and by implication, the Green movement and Iranian womens’ role in politics and protest. She has also eliminated Mahdokht, the girl who turns into the tree which makes me want to see what she replaced that with. She said she had already made a film specifically about the girl turning into the tree so to have included it would have been redundant.

I have met Iradj  Pezeshkhzad, Firouzeh Dumas, Mrs Bahadorzadeh from Kharizakh Foundation, Persophile Roger Cohen and so many others there at these guest lectures that are part of the Hamid and Christina Moghadam Iranian Studies Program. What a wonderful asset this is for Iranian Americans and Persophiles in the midst of our community in the SF Bay Area. I  have to commend Dr. Abbas Milani for getting one great Iranian after another to speak at Stanford. I also have praise for Persophile Professor Patrick Hunt, Professor of Archeology at Stanford U. It is just such a relief and delight to be in a place where the academic and artistic achievements of Iranians are so recognized,  (which is something I have been appreciating all my life or at least since the age of 11.) There is even a Rumi Poetry Reading Society which meets regularly at the Bechtel International Student Center.

The PSA at Stanford is also very active and hosted screening events of several film maker friends of mine in the past like Aryana Farshad and Jahangir Golestan-Parast.

When I go to Stanford campus, I feel like it is a great bastion of intellectual and academic achievement in an environment where that is acceptable and admired rather than scorned and the fact that it is a sister university to Sharif University of Technology says it all.