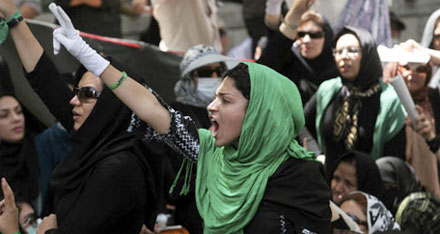 On June 12, 2009, Iran’s now infamous elections were held where hardline President Mahmoud Ahmadinejad allegedly won with 62% of the vote. What resulted was a momentous period of time where Iranian dissidents voiced their opposition to the results and to the government itself, against all odds and at great personal risk.

On June 7th, 2010, Foreign Policy Magazine published an eight-part series called “Misreading Tehran: Leading Iranian-American writers revisit a year of dreams and discouragement.” It was written by mainstream journalists criticizing what were common assertions during the post-election events: that Twitter was leading a “Revolution,” that the regime was about to collapse, that the Green Movement would change everything by using technology to democratize democracy, and that Westerners could sit in their offices and homes and make a difference, 140 characters at a time. None of these things, according to some critics, were true. And so the conclusion must be that the Green Movement disappeared or has become insignificant since last summer. Technology (Twitter, social networking, new media, ect.), therefore, cannot really democratize a revolution. According to the media, all of the promise of post-election Iran has been lost.

But the critics saying these things, mainstream journalists, are really commenting on how mainstream journalism, for a brief moment, copied, hurried to catch, and commented on new media sources such as Twitter and various blogs, and how they themselves got it wrong. While many of these writers have very critical things to say about the new media’s role in these events, they are really criticizing their previous belief systems surrounding the new media and the Green Movement.

Revolutions are not won in a day. The American Revolution was the product of over 100 years of philosophical thought, and several decades of discontent (the Stamp Act is passed in 1764, and by 1765 Patrick Henry is already a famous speaker), followed by several years of open rebellion and acts of defiance (Boston massacre in 1770, Boston Tea Party in 1773), and at least a year of open warfare (from Lexington Green to Breed’s/Bunker Hill), all before the signing of the Declaration of Independence, the opening chapter to a formal war that lasted more than ten years. The “in-between” times were marked by backroom leadership, dinner table debate, church pulpit protests… democracy in an incubator. The idea that the Green Movement would be successful in a few short months is ridiculous, the product of the unbelievable promise and inspiring courage of the Iranian protesters crashing headlong into the ability for technology to spread the echoes of their “shot heard round the world” in an instant. Looking back, these hopes were naive, and the condemnation of their disappointment profoundly arrogant.

Dr. Scott Lucas, an adjunct professor at an Iranian university and Professor of American Studies at the University of Birmingham (England), sums it up succinctly:

Prize fights are settled within 15 rounds of three minutes each; the quest for civil rights is not. The election, after all, was just the public apex of a larger, ongoing climb for political, economic, and social recognition, respect, and justice. The Green Movement, as significant as it would become, did not displace the movements for women’s rights, student rights, labour rights, legal rights, economic rights, religious rights, and the rights of Iran’s many ethnic groups. (Indeed, one of the ongoing, “deeper” issues of this past year has been how the Green Movement — if it is more than a symbolic entity — interacts with the activism of these other movements.)

This post-election contest, which rested upon years of discussion and challenge within the Islamic Republic, was always destined to be a marathon and not a sprint.

Twitter wasn’t the story last June, and it certainly isn’t today. Twitter was always a tool for getting news out more than it was for getting news in (though its ability to get news to supporters on the streets has also been dismissed too easily). But the REAL story is that for the last year, a fledgling democratic movement has moved from the shadows, where it has been hunted for decades, and into the limelight. And then back out of it, which also doesn’t matter. The movement has matured and grown, even though (like anything in an incubator) it has often struggled and foundered.

And what are the results of the struggle of the opposition movement in Iran? Not failure. Externally, the movement has inspired Hillary Clinton (with the direction of some of the State Department’s staffers, and perhaps our letters to them), America’s foreign policy has evolved from the false dichotomy of “invade or ignore (Bush)” to one of fostering developing democratic movements through the use of technology and a “Three Cups of Tea” outreach process to people in Iran, Sudan, Cuba, Venezuela, and China. This process will take while, but internally, as a direct result of the Green Movement, the regime is getting weaker. There are now serious divides inside the Iranian regime. As unemployment mounts, inflation rises, the problems mentioned above go unresolved, and as the internet outreach of those who still care about the Green Movement continues, the future of Iran may be a successful revolution.

The most painful part of the media’s quick dismissal of the opposition to the Ahmadinejad/Khamenei regime is this: Those of us who follow Iran, who have contacts within Iran, and who spend hours a day following the news there, know that the movement is actually gaining ground. We see signs that the regime is showing cracks in its armor. But we also see the bravery and sacrifice of the Iranians dissidents, men and women whose names never make it to the media.

Men like Farzad Kamangar, “a 34-year-old teacher and social worker, who was charged with Moharebeh (taking up arms against God), convicted and sentenced to death in February 2008, after a seven-minute long trial in which ‘zero evidence’ was presented.” Then, there are men like journalist and human rights defender Emadeddin Baghi, who has been arrested and is lavishing in poor health in Evin prison for daring to report the brutal crackdown of a ruthless dictator.

That doesn’t include the (at least) 48 protesters who died in the streets, and the four more who were tortured and killed in prison, for speaking their voice of discontent. It doesn’t include the 388 who were executed last year, or the 34 protesters who have been sentenced to death for speaking against their government, or the 17 Kurds charged with “moharebeh” and tortured to confess, just because they are vocal leaders of a hated minority.

But the blood on the street means something. It means that the regime is sometimes forced into backing down. It means that some clerics are no longer afraid to question the authority of their government.

This is the real tragedy of the media coverage of Iran. Not only did they misrepresent the boat, and then miss the boat, but they missed the significance and importance of the boat. What we’re talking about in Iran is a movement that could bring peace between Israel and Iran, unsanctioned trade between Iran and the rest of the world, and the replacement of one of our greatest enemies with a potentially great friend, without a single bullet being fired by the United States. Not only that, but the success of the Green Movement would be the first step in the victory against human rights abuses everywhere, abuses which stifle the democratic process and thus deny the rest of the world the next generation of peaceful neighbors.

By demonizing Iran for its nuclear program, the media has created a bugbear that has encouraged the warmongers and distorted the truth in the Middle East. These same pressures have forced Obama to risk destroying with his feet what he has built with his hands. The coverage of the Green Movement in Iran was a chance to break that narrative, and by having to retract a reckless, sexy story about social media, the news agencies have now reverted to their radioactive news cycle by dismissing the best hope for change in the region, and beyond.

Human rights violations have hampered democracy in Iran, and with it the best chance for hope and change in the Middle East. The media wants to dismiss this, because long and complicated stories don’t sell. War sells. Nukes sell. But I’m not buying.

The success of the democratic movement in Iran cannot be measured in Tweets, in newspaper stories, in rallies attended (or not attended) by reformists, or even in protesters. It must be counted in the desire for freedom and peace. As such, the strength of the Green Movement in Iran is countless, and growing.

James writes for Dissected News, where he will be live-blogging the anniversary of the elections in Iran starting at midnight tonight.