How to Run a Protest Movement 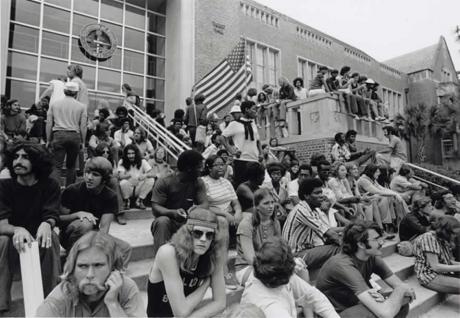 Running a protest movement, especially one in which you are trying to change an entire government and society is difficult work. All the more reason why planning and preparation is an absolute must for any kind of civil disobedience campaign to work. The Iranian Green Movement has clearly not benefited from any kind of commonly used organizational methods, with the result to show for it.

So, at risk of actually organizing the Iranian Green Movement, here is a primer made up of all the most successful techniques used by other civil disobedience movements. Since these all worked, there is a good chance they will work in Iran as well. The argument that Iran is a special case, or that the Iranian Government is too smart to fall for any “Tricks” is not being considered for obvious reasons. (if obvious means ridiculous) Apologies in advance for the arrogant presumptuousness of this entire piece:

“Where is my vote?”, and “Ahmadinejad is not my President”, is not a clear demand. Not everyone can get on board with it, because it is vague. These kinds of slogans, only serve to reinforce bitterness and whining and complaining about the general state of affairs and do little to fix them. A better list of demands would be:

1) A constitution that separates church and state,

and the VERY MOST IMPORTANT ELEMENT:


3) Has an AMENDMENT PROCESS.

This is fixed and concrete and above all, actually doable. There is no reasonable argument against putting power in the hands of the people. Arguing publicly against these demands puts you firmly on the side of distrusting the people and maintaining their continued oppression.


2: Have a clear strategy and tactics for the Protest:

Time and time again, there have been examples of protests, civil disobedience and on and on by others. Either it is a lack of intelligence, (which I find insulting, just writing it) or it is the understandable fear of physical pain or death. Simply, a baton wielded by a Basiji will hurt and bloody you and your fellow protesters. Especially if you run away, the Basiji will run after you even more and faster. For he is like a dog energized and excited by a fleeing prey.

Which is exactly why all successful protests have a strict policy, you DO NOT EVER RUN. Running is unsafe, and can cause a stampede and as we saw many were trampled by other protesters. Peaceful protests that have worked throughout history were calm, organized and SIT INS. The simple logic of a peaceful protest or civil disobedience SIT IN, is that the numbers are ALWAYS in your favor. Yes, they will try and beat up and kill the first layer of a crowd to scare the whole group. But they cannot physically shoot and kill everyone. The numbers are in your favor. Even if they start, they will run out of bullets and that fear usually makes the person doing the shooting fear for their own life and that makes them think. Solders do not enjoy shooting unarmed people. most refuse. Given that the Iranian security forces are made up of the same overwhelming majority of youth, they too would resist and stop even if they started shooting initially. The numbers are in your favor.


HOW ABOUT SOME STATISTICS?

It takes approximately 4 guards to remove a limp protester. Especially one who has clearly stated that they will not be resisting arrest. Depending on how deep the protesters are, the trucks needed to get to the edge of 10,000 seated protesters so that the guards can start removing them, will be about 200 (assuming 50 people per truck which is way too high) trucks. This will take hours to drive to the spot. Especially if the spot is tight streets. Assuming even 5 minutes to cart off a protester, you’re still looking at 833 hours to remove and arrest 10,000 people!

Again, the numbers are in your favor. Obviously they can’t physically arrest everyone. which is exactly why peaceful, sit ins, and civil disobedience protests work. Precisely why running, throwing rocks, and fighting back, doesn’t.

Again, looking at other successful examples: Instead of an open field, you march to Parliament, or better in the case of Iran, Khamenei’s house, because in Iran, his house is Parliament, or where the real ruling takes place. You want a symbolic protest location? There it is, the SUPREME RULER’S HOME!

Khamenei is an old man, and all old men need their rest, so just like the Orange revolution in Ukraine, you take whistles. I am sure they have whistles in Iran. Even if they don’t, to paraphrase Lauren Bacall, “You know how to whistle don’t you Steve?” And you BLOW BLOW BLOW!


DON’T YELL ALLAHOAKBAR FROM THE ROOFTOPS AT NIGHT!

The cynical assumption that you are using their own weapon against them is far too intellectual to be granted any sort of credible points as a legitimate form of protest. Plus, this is simply another very silly way to try and out-intellectualize the very argument for repression. Islam and ALLAHOAKBAR will NEVER get you FREEDOM. That is the whole point of EVERY SINGLE religion, to take freedom of thought away from you. That is why they call followers, BELIEVERS.

Call on on the Parliament to boycott it, and to protest with you. Iranain parliamenatarians also want more power, so they would likely be willing to stand by the Movement. especially if hey feel it could win. Trust that once it gets going, and the folks who are on the side of the government see success or more importantly see the government fail to contain the protest, will most likely switch sides, because no one wants to be on the losing side.

Mousavi and Karroubi calling for no protests this weekend were absolutely right. Not because of avoiding potentially deadly clashes, but because there is no organization of the Green Movement. There is no clear point at this timel. It is nothing more than a routine, predictable happenstance kneejerk example of a riot triggered by an arrogant civil rights insult, by the government against largely unemployed Iranian youth. Obvious.

However, there is stil need for at least 3 points of reform in Iran. The continuous delay in organizing a protest movement o demand these 3 points, using established principles and techniques of protesting, precisely prevents Iranians from getting past “The Wall” that the government has erected.

In fact the wall is not a wall, but a tissue-paper thin veil of well-crafted deception. The government has painted a dark foreboding looking wall on tissue-paper. But it and the argument it is built upon, is still just tissue-paper thin.

At the end of the day, they have no REAL power. especially against the word “No”. No, I do not believe you, No you cannot control me, No you are not in charge of us.

Their only strength comes from our unwillingness to stand together and calmly push through it, as one giant well organized force.