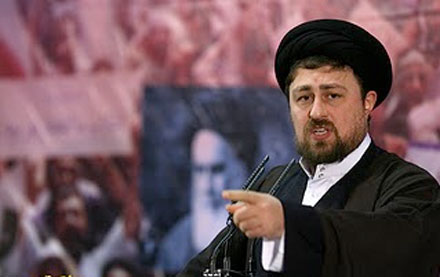 The gap between the reformist leaders of the Green movement and its supporters began to show itself when the initial question ‘where is my vote?’ was replaced by the chant: ‘freedom, independence, Iranian republic’. The incompatibility between the reformist leaders’ demands for a re-run of the election and the rank-and-file’s revolutionary demand to replace this regime with a democratic government has resulted in a schizophrenic identity as each side attempted to pull the movement in its own direction. This has weakened the movement in some ways. But the continuation of the struggle has also hastened the process of the regime’s disintegration. There is no longer just a clash between reformists and conservatives, but now the widening and deepening of fault lines between the rainbow coalition of conservatives whose support for the rigged election is now being exposed in public. One astonishing example was the anniversary of Khomeini’s death on 3 June.

After the regime failed to materialize the millions of mourners it had promised, it humiliated Khomeini’s grandson, who had been invited by the supreme leader. Ahmadinejad arrived late to the platform, prolonged his speech to leave little time for Hassan Khomeini, and then organized heckling so that he had to stop unfinished at his grandfather’s mausoleum. The supreme leader then kissed Hassan Khomeini as if nothing had happened. The repercussions of this performance were severe. Not only were armed confrontations between the guards prevented at the last minute, but some conservative leaders in the parliament, such as Ali Motahari, indirectly but openly attacked the supreme leader, who prior to the election had been treated as a demigod. If this was not enough, Rafsanjani wrote an open letter criticizing the supreme leader for remaining silent when attacked by Ahmadinejad’s government. On an apparently different matter, Ayatollah Jannati, the arch-conservative head of the Guardian Council, openly chastised Ahmadinejad for speaking about violations of the constitution, reminding him that is not his place to talk about such issues.

In other words, the regime is disintegrating just as it is meant to be demonstrating a united front. It seems to be trapped by the throes of a powerful death instinct. This process intensified when Khamenei turned a deaf ear to the movement’s initial demands, effectively declaring war on Iranians. It seems he did not want to make the same mistake as the Shah, who famously stated: “I have heard the voice of your revolution.” However, Khamenei’s iron-fist policy has backed the regime into a corner, in which the slightest concession will have a snowball effect. It is left with no choice but to increase the levels of violence- a policy that has led to disillusionment and frustration at all levels of the regime.

The leaders of the reformist movement have shown themselves abjectly incapable of using this as an opportunity to take the initiative and promote even their own, very limited agenda. Their lack of vision, initiative and decisiveness stands in stark contrast to the leaders of previous revolutions in 1905, 1951 and 1979. They neither understand nor accept the revolutionary nature of the movement itself, and have even recently begun talking about a return to the “golden years of Khomeini”, as if Iranians do not know that these were tantamount to despotism, war, mass murder and many broken promises. So far, their only initiative was to ask the government permission to hold a silent demonstration on the anniversary of the last year’s election. This was obviously refused, even though constitutionally there is no need to request permission for demonstrations anyway. Shockingly, they did not have a Plan B. Instead of developing one, such as asking people to stay home to demonstrate the regime’s isolation by empty streets, they canceled the demonstration and even joined the regime in warning people to stay off the streets in fear of a crackdown. Despite this retreat, there were spontaneous demonstrations in universities and mainly in back streets and alleys to avoid the guards, still around 1200 got arrested. This sporadic, but under the circumstances extremely daring challenge was an unmissable sign that the movement is beginning to bypass its leaders. The move was even felt in London, where at a demonstration in front of the Iranian embassy on 12 June, unlike in previous protests, not a single chant was heard in their support.

It is not only the ruling mafia that has trapped itself in its own doing, but also Karroubi and Mousavi. They are trapped in their reformist beliefs, but much more importantly, by their past. It might be that they know that if the regime does collapse, they will be called to account for many actions that closed down the democratic possibilities of the 1979 revolution and made it into what we see today. There is compelling information, for example, about Karroubi’s role in clandestine agreements to delay the release of American embassy hostages until after Reagan’s election, or about the harsh forms of oppression meted out during Mousavi’s premiership, most notably the massacre of over three thousand prisoners in 1988.

This possible dilemma is yet another reason for organizing a general amnesty for all those within the regime, based on principles of truth and reconciliation. The precedent is already being set; the latest example being the confession of Khatami’s deputy Interior Minister, who in an open letter entitled “Father, mother, we are accused again” talks about the strangling of freedoms after the revolution. In any case, it is now clear that the Green movement is bypassing its reformist leaders. The hope is that before being bypassed completely, they will bypass themselves and actually join the movement, so that Iran’s century-long struggle for democracy and independence will not be prolonged even a day longer.

AUTHOR
Mahmoud Delkhasteh is the author of ‘Islamic Discourses of Power and Freedom in the Iranian Revolution’.