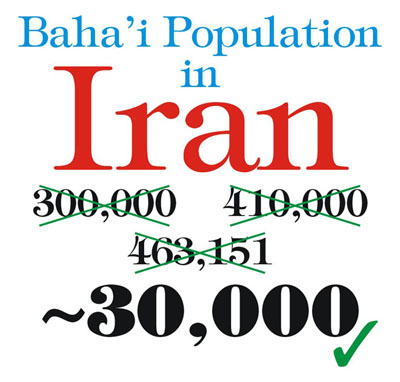 There has always been confusion in the Population of the Baha’i Faith followers in every country, since its ORIGIN. Regarding their numbers, “Millions” is the usual figure claimed by them.

As a result Baha’is and Baha’i Administration have gone on defensive. They are quick to blame the Christians for this exaggeration and inconsistency. Where did the Christians get their data? It is only from the National spiritual Assembly of the various countries especially the NSA of USA. It is only the Baha’is and their officials who are to blame for the false-misleading reports on the wildly exaggerated Baha’i census. It is not the fault of the editors of Christian World Encyclopedia and Encyclopedia Britannica who relied on information given to them by the Baha’is.

One may ask, why didn’t the NSAs , UHJ-ITC-ABM-CBC ever contact the Christian World Encyclopedia Editors, and request a correction? This is because the Baha’is wants to jack-up their numbers- for “public image”.

In case of the Baha’i population in Iran the Baha’is speak lies which puts to shame any lover of justice. Sometimes they say one third of the Iranian population is Baha’i and sometimes they propagate that half of the Iranian population is Baha’i. To my utter surprise during my visit to India in 2002, a Baha’i convert informed me that the whole of Iran has accepted the Baha’i Faith. I politely told him that the Baha’is have made a fool out of him .There are not more than 20,000 Baha’is.

Even the Zoroastrians, Jews and Christians of Iran are not being sparred from this onslaught of lie for which the Baha’is claim that all of them have accepted the Baha’i Faith.

Here are the Excerpts from the writing of Edward Brown,

Population in Iran as claimed at the time of UHJ

From 3,00,000 to 4,61,351 followers. The percentage varies from 0.69 to 2%. This is unimaginable lie. The Encyclopedia Britannica and Encyclopedia of Christians have conveyed that the Baha’is have told them. The reporters are none other than Douglas Martin (former member of House of Justice) and Simeon Kohlman Rabbani (a Baha’i), who gave the information to World Christian Encyclopedia is a Baha’i.

There is one silver lining in the Baha’i census of Iran. It exposes the falsehood. Abdul Baha, leader of the faith (of lies), claimed fifty five millions at his time. UHJ is now claiming only 3,00,000 !!!

Presented below are certain eye-openers !!!

The actual number of Baha’is in Iran is not more than 30,000. That should not make anyone who is a Baha’i very depressed. The Baha’is should know that exaggerating Baha’i census was the policy of Abdul Baha, Shoghi Effendi and now House of Justice.

What the Universal House of Justice should know, is that by making false claim of number of Baha’is or by parroting Anna’s presentation, no one will ever change his/her Faith. They can organize reflection meetings, deceptive children classes, launch fake Intensive program of Growth have useless cluster growth meetings – the Baha’i population will not grow. The Baha’i population will not grow by sending young Iranian Baha’i girls outside Iran for propagation of Baha’i Faith.

Baha’ism is now a failed attempt, a misfired plot to portray a man made religion to be counted amongst major religions of the world. Baha’ism is dying in its infacy. It will never see the light of the day.