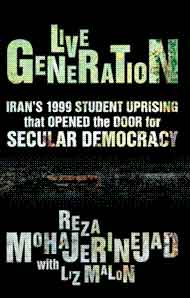 Live Generation, the book I wrote last year about the student movement of 1999 in Iran, is finally out and available for purchase. The book details the events of 18 Tir, and provides historical background about the political landscape of the last 31 years of rule by the current Islamic regime and the student movement dating back to 1953. In writing about that movement, I have described the relation of our student movement to the current day situation in Iran—particularly the response to last year’s fraudulent elections in the Islamic Republic of Iran and how our protests a decade earlier were foundational to the response by protesters in 2009 and 2010. The following is an excerpt from the book Live Generation.

I was only a boy in 1979, but the events that occurred during the overthrow of the Shah would shape how I was educated and would change all our lives almost overnight. When you ask those who lived through the Revolution what it was like, they often will tell you that one day the country was under the Shah’s rule, and the next day we lived under Islamic rule. All bets were off and it was a completely new game.

I am often asked by people who are not from the Middle East how the Islamic regime could have taken power, and how they have stayed in power. The answer isn’t a simple one, but one that has many factors involved. The Shah of Iran, Mohammad Reza Pahlavi, had ruled Iran for twenty-five years following the coup that overthrew Prime Minister Mohammad Mossadeqh. In 1979, the Shah’s rule was considered a dictatorship. Ayatollah Khomeini had lived in exile for many years, and from Iraq and France he had voiced his extreme defiance against the Shah of Iran. In those early days he never stated that he was going to turn Iran into an Islamic theocracy. He said he was against dictatorship and imperialism, and was very supportive of the poor in Iran.

The other part of the equation was that Khomeini extended a hand of cooperation to other opponents of the Shah. Among them, the communists and other leftist groups, the National Front, and the Mujahadeen all had the common desire to overthrow the monarchy. What they didn’t have was a religious infrastructure to ensure that the changes they wanted for the country would stick. What Khomeini could bank on was the institution of the mosque. Then, just as it is today, every village throughout the country had a local mosque. As the mullahs blessed Khomeini’s campaign throughout the country, this would help later on when the model for a theocracy was presented. Once the Revolution happened, the Islamic clergy fought with the nationalists, the Mujahadeen, and the communists, and later completely turned on them. This is the time when Islamic enthusiasm proved not to be enough to sustain the movement. The ideology alone wasn’t reason enough for people to follow the strict rules set by Khomeini, and the Islamic Republic began its march toward violence as a means to control the masses. Thousands of those believed to be in opposition to the government were imprisoned and killed, and what was left was a theocracy that ruled with an iron fist.

In November 1979, with the hostage-taking of fifty-three American diplomats, the Muslim Student Followers of the Imam’s Line, who were at that time new and fairly small in numbers, became visible all over the world. Still, they needed more control of the universities within the country because the secular movement was more powerful and popular among students. The students’ secular movement of that time was also better organized. The Muslim Student Followers of the Imam’s Line would become what is now the Daftar-e Takim-e Vahdat and part of the Reformist movement of students who supported former Islamic regime President Mohammad Khatami. In 1980, Iran began what the Islamic Republic called The Cultural Revolution—a term borrowed from Mao’s People’s Republic of China. As part of this movement, in April of that year the government closed all universities for what would end up being two years. This was an effort to cleanse the institutions of Western ideology and non-Islamic influences, and part of that cleansing included the expulsion of many students and professors who were believed to be leftist or Western-leaning. Students and lecturers who tried to protest the closures faced imprisonment or worse. The fallout of Iran’s Cultural Revolution was that many intellectuals left the country following the closure of the universities.

Upon the reopening of the universities, only students who could prove that they had no affiliation with any “un-Islamic” organization were allowed to return to school. The Dafter-e Takim-e Vahdat grew during this time, establishing offices at universities throughout Iran and growing in numbers. Later, the Basiji also had a presence within universities for the first time. A secular education was all but forgotten, and the universities were taught by members of the regime since they had been purged of any professors who had Western leanings prior to the Revolution.

September 1980 marked the beginning of Iran’s war with Iraq and the regime of Saddam Hussein. Although the war that lasted eight long years came with heavy casualties for Iran, with some estimates as high as one million Iranian lives, the war secured Ayatollah Khomeini’s position and the new theocracy that he had started. Just as any other country would, when attacked from an outside force, citizens rallied around the ruling government. Those who may not have supported the Islamic Republic prior to the Iran-Iraq War quickly got behind Ayatollah Khomeini after the war began.

As the war continued, and as the casualties became higher, Iranians grew weary of the war with Iraq. The promises broken by the Khomeini regime came to light in time, and the youth in particular, who had been impacted by the new government’s rule, started to voice their questions. The exiled Ayatollah who was opposed to dictatorships had come home to create one of the finest.