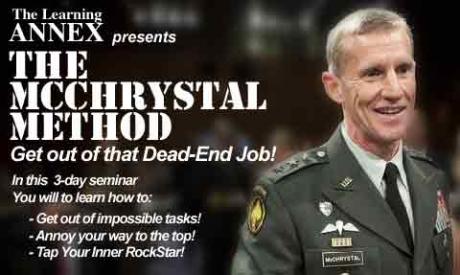 The baffling news last week of General McChrystal’s audacious comments being made pubic via the Rolling Stone article, have left many wondering what the hell is going on in Afghanistan these days. That and the ever present looming question on what the US and Israel are planning in the wake of Iran’s rejection and ridicule of the latest round of UN economic sanctions, raise even more confusion as to what is exactly going on here.

What is clear though is that the Afghanistan Adventure in Importing Freedom to a country that doesn’t seem all that interested in it, isn’t going well.

If the Taliban (excluding the purported less than 30 Al Qaeda gold-members remaining in Afghanistan?) add up to even 20,000 strong, which is a stretch, then the over 150,000 US and 327 odd International forces there to fight them since 2001, and who don’t seem to be winning decisively, raises the words “…quagmire in Asia” more loudly. Add in every single military technological advance and bomb design, save the use of the ultimate “H-ones, N-ones”, and the effectiveness in trying to fight an insurgency (used to be called guerilla) war, with traditional West Point-taught useless Waterloo methods seems nothing short of insane.

What appears to be happening instead, is more along the lines of the occasional Little Big Horn-style victories by the Taliban (Sitting Bull indeed!) who are comfortable losing now and again, because time and the shrinking US military budget, as well as the attention-span and the patience of the American people is on their side.

Whether the comments of McChrystal last week are yet another glaring example of “The Peter Principle” at work, or simply the next episode in the ongoing Soap Opera (“Like Sands Through the Hour Glass, so go the many Generals of our time…” that has become the mode d’emploi for the US military command in the war on terror (Remember how all this started?).

No war has seen this many generals come and go, like a revolving door of post-enlistment career advancement. Aways advertised as having exemplary credentials and “great leadership”, these dinosaurs have rotated in and out of CNN and Fox more than a well endowed weather girl, offering only more fuel and fodder to the Al Qaeda marketing strategy whose likely current tagline has got to be something like this:

“American Generals and Presidents May Come and Go, but HATE is forever. Here at Al Qaeda (A subsidiary of Halliburton) we may be small, but we’re BIG where it counts. And we’re not going anywhere…”

Clearly the Rolling Stone interview with McChrystal has opened a telling vignette on how the US military from the top down really feels about politics, politicians, and the private sector. But the information in this article, while poignant, and even laugh out loud funny, doesn’t work when you’re trying to execute a disturbingly routinized war. You need your general in charge to be serious. Clearly McChrystal has other aspirations, interests and hobbies. Given the long history of his misbehavior, the General’s implosion, might indicate yet one more sexual deviation, that familiar TV Police drama tendency of the criminal’s desperate desire to be caught and disciplined. Allowing this interview out simply doesn’t make any other sense.

Obama may have sensed this wack-factor in his previous meetings with McChrystal and especially during this most recent callback to Washington last Wednesday. This could explain the speed at which the General was removed from command. I mean, his “resignation” was “accepted”.

On the other hand, insanity and insubordination of your top most field commander during a war aside, this brings up the whole topic of that other US Military tradition, namely lengthy and costly involvement in places that don’t want, warrant, or require it.

Afghanistan, while arguably closer than Iraq to the real root of 911, is still largely a mistaken deployment. Given how Iran got their nuclear technical know-how via A.Q Khan, and the whole General Musharraf era and cover up and possible involvement in Bhutto’s mysterious death, along with the Times Square episode of Pakistanis Gone Wild, never mind everyone including one Colorado resident knows Bin-Laden is in Pakestan, you’d think we’d get the hint as to where the real trouble is coming from. While abhorrent as it was, if bombing and attacking Saudi Arabia was understandably off the table, 911 should have been a legal and reparations matter, holding the Saudi government responsible for the actions of it’s citizens. Like the BP disaster, the US should have asked Saudi Arabia to clean up the mess and pay for all of it. Think of that!

Were this kind of policy put into place, even the most rogue governments like Yemen and Sudan, when faced with the final bill for their citizenry’s extracurricular activities across the globe, would police themselves to be sure.

In hindsight, the better and more cost effective assignment for McChrystal and his band of merry psychopaths now, is to go back to the black ops depths from whence they came. Obviously the General is more suited to sneaking around the bushes, and stabbing people in the back, in the dark, as they sleep. And in America the land of feeling good about yourself and doing what you love as a career, this is the obvious bent here. Luckily there happens to be an actual need for this skillset at the moment. Bin Laden is still at large. Or at least his death is uncertified. And for some unexplainable reason, we can’t invade Pakistan.

Obama should therefore re-assign McChrystal and give him a billion dollars a year, to buy all the necessary toys, intelligence, and rumors with which to hunt down and kill Osama. That and a farewell party, something public, something the rockstar general would enjoy, other than the ass-kicking he apparently yearns for. Maybe a celebrity roast? Something like,

“Stan look, everyone knows, you like caves. Caves are dark and slimy and scary and fun for you. Osama is purported to be living in one. Why don’t you take that guy from Colorado, and go and find him, Stan? Take your time! And Stan, don’t contact us, we’ll contact you. And keep your mouth shut and your opinions to yourself. You are like a child who happens to be good at just 2 things, covert killing, and sarcastic comments about your boss that only you think your staff thinks is funny. Don’t mistake that for maturity or leadership.”

Then let Jon Stewart, Stephen Colbert, and Keith Olbermann take a few shots at him, and then send him back out to do what he was bred to do.

Petraeus in the meantime, is merely suitable as a doorman. Like that Stewardess that bids you farewell at the head of the plane exit as you disembark, to repeatedly say, “Buh-Bye!” “Thank you for flying US!” Take care now!” “Buh-Bye!” Have a nice day!” as the troops begin leaving next year according to Obama’s dreams. Or they can leave this year for that matter, because in the end, it makes no difference. Regardless of whether the Afghan army and Police is ready or not. History of Afghanistan has taught us this time and time again. It’s time we started learning from it.