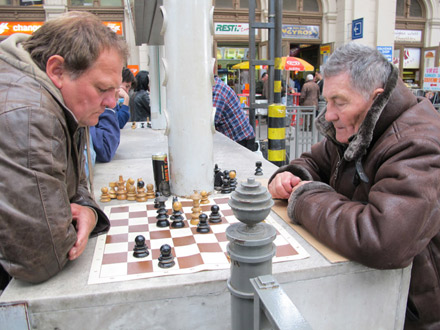 At Budapest’s Keleti train station there are a couple of old men who play chess. For money. They look like they’re living on state pension and just need some extra cash. I first saw them when I was waiting for the train to Prague. I thought they were passengers like the rest of us. Then I noticed small change on the side. And the fact that these two seemed to win every game.

One of the guys gestured and invited me to play. I said no, no… I pointed at my eyes… I’ll just watch, thank you. I wish I knew how to play chess, well. I know how to play, but I don’t know a single strategy and I get easily beaten. The last time I played was 20 years ago with a girlfriend who thought she was a lot better than me. And I thought she was too. Until one day I won and I decided it was best to retire while I was on top.

I saw the chess players again a few days ago. As I was watching one of them play at the station’s main platform, I slowly began to change my mind. I wanted to play. Just for fun. I didn’t care if I suck.

Well, the result was no surprise. The first game I lost in about 15 moves, the second maybe 25. I was proud of myself for lasting that long. Maybe he was being nice and giving me the full 500-Forints-worth of his time. In any case it was a pleasure >>> Photos

I guess this is border-line begging, although I would place them on the honorable and fun side of the border. It’s a fair challenge. May the smarter win…cash.

I’ve become friends with a couple of Egyptians at the Internet cafe in the train station. A father and son, Majdi and Radi. Today I learned something interesting. Did you know there are other ways of playing backgammon? I didn’t.

I was watching Majdi play another guy. At first I thought I needed to concentrate more because I wasn’t understanding how the chips were being moved. Nothing made sense. As far as I was concerned there’s only one way to play backgammon — at least on a backgammon board — and this WASN’T it.

So I watched, carefully. After a few games, I kinda figured it out. It was very interesting. For instance at the start, all the chips are off the board. You throw the dice and land the chips on the opponent’s side and then move them to yours. You can only land on open slots… There’s no “killing” of chips that are uncovered.

I asked Majdi what the game was called but I didn’t understand what he was saying. (By the way, as he was playing, he was saying the dice numbers in Persian, like, yek, do and shesh… But Majdi said he was speaking Turkish. Hm…)

I searched for variations of backgammon and found this one [The Blocking Game] to be the closest to the one I saw today. Give it a try.