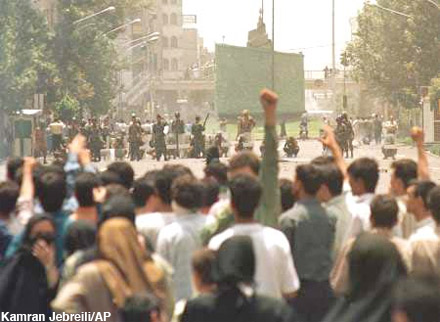 This time of year, every year, I remember. On the evening of July 8, 1999, I slept in the dormitories of Tehran University when it was attacked. We woke to the sounds of the Basiji as they screamed at us in the name of a god who was merciless. They beat us to a pulp. The sounds of that night have never faded from my memory. Students were battered, their bones literally broken like branches pulled from a tree. There were shots fired and the sound of breaking glass filled the night air. Students screamed in disbelief and horror as their sense of security was forever shaken.

In the days that followed, the youth of Iran did what was at that time, inconceivable. They didn’t back down. They came out in numbers the Islamic Regime would never have believed possible. Back then, questioning the government wasn’t common. But we did question it. We asked why our fellow students were beaten, why Ezzat Ebrahim Nejad was murdered. We asked how a government promising reform could attack its students with so much force. We questioned the Supreme Leader who later wept on the Islamic television station, promising to forgive us if we would only come forward—a promise we were sure would be broken just as surely as our bones had been on 18 Tir.

Our protests evolved from peaceful rallies to an all out fight for our lives. Our group was secular. We wanted a democratic government that separated religion from our government. There were those then, just as there are still some today, who believed that reform would be enough, that a democratic Islamic government was possible. Our group never subscribed to this idea.

Now, eleven years later the fight continues. Many of the names inside Iran have changed, and many remain the same. Student activist Majid Tavakkoli was arrested last December, and sits behind the prison walls of Evin. His young face reminds me of those of us who took to the streets eleven years ago. Majid is in good company as prisons all over the Islamic Republic of Iran are filled with political prisoners who have dared demand basic human rights for our country.

When I left Iran I believed I had a better chance of fighting for democracy from outside the country. I believed that those who were outside, those who loved Iran as I do, would be able to join forces with us and support a movement for peace and secular democracy in Iran. I have had moments when I questioned this move. There are times when I read about friends like Heshmat Tabarzadi and Shiva Nazar Ahari as they endure time within prison walls, and I wish I was there with them.

July 1999 opened the door and was a new voice for freedom and secular democracy in Iran. It was the first time that the children of the Islamic Revolution rose up. Today, when we talk about the Green Movement, the work that students did eleven years ago started a new generation of Iranian citizens. Because of their courage and their sacrifice, the people of Iran have come out to voice their opposition to the Islamic regime. The new generation is alive, and it is not only the youth of Iran but it is from every social class, gender, and age. Today’s opposition to the Islamic Regime is truly the Live Generation.

In the last year I have seen how, when we raise our collective voices against the Islamic regime, both inside and outside of Iran, we make the theocrats who have robbed us of our country for more than 31 years, bristle. They clamp down harder because they can feel our breath on the backs of their necks. They are watching us to see our every move, and they are afraid. To Ali Khamenei I say, we will not back down. The blood that you drew on 18 Tir eleven years ago did not flow in vain. You may continue to beat us, to break our bones and our backs, but you will never break our spirit.

Reza Mohajerinejad is an activist for the student movement in Iran, and was one of the organizers of the Iranian student uprisings in July of 1999 (18 Tir). His book, Live Generation, is about the events of 18 Tir and how the student movement back then was foundational to the current day protests in Iran.