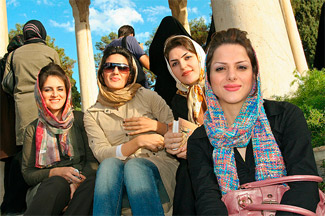 “I just got back from Iran.”

In today’s America, that’s a conversation-stopper. Those of us able to say it become temporary objects of fascination, like our grandparents would have been if they had visited China or the Soviet Union in the 1950s. Traveling to Iran makes one seem like a bold adventurer on a dangerous foray into enemy territory.

The reality is more prosaic. Although few Americans visit Iran, there is in fact no legal obstacle to doing so. I accompanied a group of American tourists on a thousand-mile, two-week trip through the country. We met no government or opposition leaders, but we were free to talk with ordinary Iranians, and did so at every stop. Because the government has made it difficult for Western journalists to work in Iran, traveling the country this way may now be the best way to gauge its people’s mood.

The first thing that strikes Americans who visit Iran is how amazingly pro-American its people are. Nowhere else in the Middle East, nowhere else in the Muslim world, and almost nowhere else on earth do people so unreservedly admire the United States. Opinion surveys confirm this phenomenon, and I remembered it from previous visits. Nonetheless it was disorienting, in the heart of the purported axis of evil, to to be surrounded, as I was at Imam Square in Isfahan, by giddy female college students shrieking “We love America so much!” At a Persian garden in Kashan, I met a solemn elder whose only English phrase is “America very good,” and who pronounced it with grave reverence.

Pro-American feeling in Iran is due mainly to Iranians’ admiration for what the United States has achieved. Americans have what many Iranians want: democracy, personal freedom, and rule of law. Their desire for these blessings is not abstract or transitory. It is the product of their century of striving toward liberal democracy. Since the Constitutional Revolution of 1906, generations of Iranians have assimilated democratic ideals. Today their society is the opposite of their regime: open, tolerant, and eager to engage with the world. There is more long-term potential for democracy in Iran than almost anywhere else in the Muslim Middle East.

Pro-American sentiment in Iran is a priceless strategic asset for the US. A military attack would liquidate or at least severely weaken this asset. It would probably turn the most pro-American population in the Middle East into anti-Americans, further undermining the US position in the world’s most volatile region.

The second thing I learned in Iran is that last year’s explosion of anti-government protest is finished, at least for the moment. Governments use repression against protesters for the simple reason that it usually works. It has worked in Iran. Many people are unhappy — it is impossible to estimate how many — but no one I met predicted more upheaval soon. Life is reasonably good for most Iranians, and a possibly stolen election is not enough to force them from their homes to face beatings and arrest.

This suggests that if there are to be any negotiations with Iran over the next few years — the amount of time it may take for the Iranian nuclear program to mature — they will have to be with the current regime. Postponing a broad negotiating offer in the hope that the regime may fall is unrealistic.

Finally, I was struck — though not surprised — by the unanimity with which Iranians, even those who joined last year’s protests and fervently support the reform agenda, reject help from the US or any other outside power.

“Many people don’t like the regime, but they don’t want the Americans to come and rule us,” a shopkeeper in the Shiraz bazaar told me. “They would rather live under a regime they don’t like than a regime placed in power by foreigners.”

This sentiment is widespread and powerful in Iran. The reason is to be found in modern history. For most of the 19th and 20th centuries, Iran was ravaged by foreigners who subjugated its people and looted its resources. Whenever Iran has sought to modernize — whether by building a steel mill in the 1930s or by nationalizing its oil industry in the 1950s — outsiders have intervened to block it. This has made Iranians as sensitive to foreign intervention as any people in the world. It leads them to reject political forces that they see as sponsored, supported, or encouraged from abroad.

Some Americans would like to see Congress and President Obama embrace Iran’s democratic movement vigorously and publicly. But not even the movement’s own leaders want this support. Far from helping them, an endorsement from Washington would stigmatize them and de-legitimize their cause. Americans often assume that their support for like-minded friends in the world is helpful. In Iran, it would not be.

“Bush was very bad,” mused a math teacher I found sitting beneath a fig tree in the town of Rayen. “Obama is a little better. But Iranian people believe that when America and England look at Iran and Arab countries, it is only because they want to steal what we have.”

Sobering realities shape Iranian politics: There will be no regime change soon, and there is little the West can do to hasten it. Nonetheless, Iran may have more democratic potential than almost any other society in the Muslim world. Seventy percent of Iranians are under the age of 30. Change will come, but at Iran’s pace, not America’s.

In the meantime, centrifuges will keep spinning at Iran’s nuclear plants. This looming crisis cries out for creative diplomacy, but Washington remains frozen in the paradigm of confrontation.

AUTHOR
Stephen Kinzer is an author and newspaper reporter. He is a veteran New York Times correspondent who has reported from more than fifty countries on five continents.