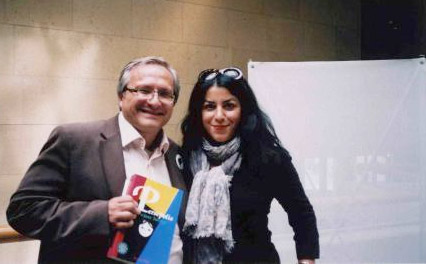 Directors Marjane Satrapi and Vincent Paronnaud were back on the French Croisette in Cannes, but this time not to present a new movie but announce the making of two in a near future. The first En Attendant Azrael aka Waiting for Azrael will start shooting on the 19th of July at the Legendary Babelsberg Studios in Berlin and will be followed by Le Onzième Laureate aka The Eleventh Laureate described by it’s creators as something of a Western Spaghetti with a Persian flavour, set on the Caspian Sea. Given the wild imagination of the creative team behind this new cinematic adventure, there has been much speculation as to what will be the outcome and definitive onscreen result of what is meant to also be a visual tribute to cinema history and film aesthetics notably in the use of Technicolor and Cinemascope as means of illustration.

Three years ago the fairly unknown talented duet of first time directors Marjane Satrapi (author of the comic books) and Vincent Paronnaud (nicknamed Winshluss, also a comic book author and artist) mesmerized the Cannes Jury with their animated film entitled Persepolis about the childhood and young adult memories of an Iranian girl amidst the Islamic Revolution of 1979, the bloody and tragic Iran-Iraq War, the Islamic Republic’s cultural revolution and experiences of growing up in exile. The serious historical and political backdrop of the story did not overshadow the dark humor, the collaborative cinematic imagination and personal outlook of it’s directors in the film adaptation of Satrapi’s best selling comic book for which the film and it’s directors received not only numerous international critical acclaims (a , aka the French Oscars®, ) but also a worldwide , turning even it’s DVD release into something of a cult movie buffs must haves …

The experience acquired by the two partners on this animated film although hectic to their own admission given the technicalities relevant to the genre (drawing each of the images Frame by Frame while coordinating a team of graphic artists, animators, editors and sound engineers to achieve the final result of a full length animated movie) was first and foremost a golden opportunity to work with real life actors and not the least: Catherine Deneuve, Chiara Mastroianni, or Danielle Darrieux all of whom represented in their own right quintessential movie stars belonging to three different generations and eras in French Cinema. The working process was a great initiation to movie making in general for each animated scene was rehearsed live in the studio as if they were working on a live action movie. Once the voice and movements were recorded, the graphic and animation departments would do the rest to complete each scene into the final animated format using the original physical and vocal expressions of the actors.

As a result, the former comic book artists used to a solitary work confined to their intimate and limited environment were to thrust themselves into an entirely different discipline that of: Team Work.

There was already a world of difference between the original comic book Persepolis and its film adaptation. This time the challenge will be even bigger and certainly more exciting on Chicken with Plums for it will be a genuine feature film, shot in live action and with real sets, only partially based on Satrapi’s successful follow up album to Persepolis which was renamed Waiting for Azrael:

“The heartrending story of a celebrated Iranian musician who decides to give up his life for music and love. When Nasser Ali Khan, the author’s great-uncle, discovers that his beloved instrument is irreparably damaged, he takes to his bed, renouncing to the world and all of its pleasures. Over the course of the week that follows, we are treated to vivid scenes of his encounters with family and friends, flashbacks to his childhood, and flash-forwards to his children’s future. And as the pieces of his story fall into place, we begin to understand the breadth of his decision to let go of life: the failed love affair with the woman of his life, whom he has met again by chance …

The poignant story of one man, is also a stunningly universal and luminous tale of life and death, and the courage and passion both require of us.”

Beyond the technical and creative challenges, Satrapi and Paronnaud had to overcome a financial challenge of finding people willing to produce their next project.

The financial meltdown of recent years that hit all sectors of the world economy did not spare the film industry either. For this new film project (announced in the immediate aftermath of the international success of their first movie Persepolis in 2007), was at one point seriously considered to be abandoned, were it not for the tenacity of it’s iconoclast directors and loyal stamina of their associate producer/distributor at Celluloid Dreams (a company run by a French Iranian Expat ).

To complicate matters, the film was not to be their only project but the first of two live action movies aimed at completing the initial Persepolis story in the form of a Trilogy (albeit the first being an animated film as opposed to the two feature films in line).

The third film will also be based on a comic book currently being completed for publication by Satrapi under the title Le Onzième Laureate aka The Eleventh Laureate. The plot will serve as screenplay once filming Waiting for Azrael will be completed.

In an interview to a French magazine Iconophage in 2005, Satrapi summed her story as such:

“It is the story of my paternal grandmother (as opposed to her maternal grandma in Persepolis), the Eleventh woman to obtain her high school degree (baccalaureate) in a small town on the Russian Frontier next to the Caspian Sea. It’s the story of a woman who lived her life to the tilt, fleeing her father’s home disguised as a man in dramatic circumstances. My great grandfather (her grandma’s father) killed his brother to marry his wife. The culture in this region of Iran is so similar to that of Russia. Everything is always dramatic … equally crazy and tragic! It’s probably because of the climate in that region or has to do with what they eat … dunno … (Laughs) but in any case that makes their characters so interesting. At the age of 65 my grandma suddenly had a guilty conscience and became religious because she feared she may die soon and go to hell. So she decided to go for a hajj to Mecca and renounced completely to her past. She would never speak about her youth anymore but from time to time, I could hear her say something and then the contrary which would make her angry. My grandma was really a bitch, probably the worst person on earth one could imagine. I mean she was a real Bitch (laughs) … but I try to show in my books at least that the world is far more complicated and complex than we imagine, and nothing is black or white in life. She was not a likeable person but I want to try and explain why some things about her make me still like her or at least be touched by her personality. For instance my grandma actually had 18 grandchildren (including me) since she had four sons. I was the only person who could answer her back because I made her laugh. I guess there was some kind of mutual respect between us and that made her comfortable in her conversations or relations with me. The story starts during WWII … as a matter of fact for Europeans just like Americans as a matter of fact; World War Two is always seen as the most important historical event of the 20th century. For us Iranians however, that has never been the case, because not much happened to us during that time to be honest. As a matter of fact in Persian the word “Nazi” is a girl’s name which means “gracious” or “cute” if you will … even my politically left wing parents hesitated to give me that name, which proves if needed that our planet is truly round and that anyone can claim that he or she stands at it’s center. In the end of the day it is a question of perspective don’t you think?” “

For Waiting for Azrael the excitement is all the more intense for the two directors given that the film will include an even larger and prestigious cast than on Persepolis. Just to give you a taste in advance here are some names involved: French Stars