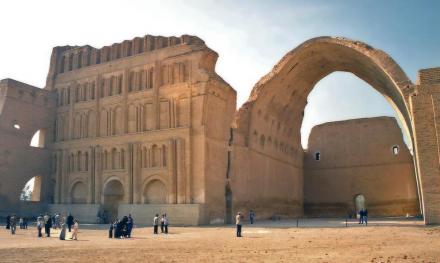 The glorious Achaemenid Persian empire dominated all of the Middle East commencing from 550 to 330BC , Alexander the great conquered the Persian kingdom and destroyed the capital city of Persepolis .By all means the Sassanians (who were the descendants of the Achaemenid Empire) wished to revive the former glory of the Achaemenid Empire, this included their structural design, the Greek conquest of Persia inaugurated the spread of Hellenistic art into Western Asia; but if the East accepted the outward form of this art, it never really assimilated its spirit.

In the Parthian era (250BC-224AD) Hellenistic art was being interpreted freely by the peoples of the Near East and throughout the Sassanid period there was a continuing process of reaction against it. Sassanid art revived forms and traditions native to Persia; and in the Islamic period these reached the shores of the Mediterranean Sea.

We are provided with a vivid idea of architecture within the palaces of the Sassanian kings some excellent examples include those at Firouzabad and Bishapur in modern day Fars province. The palaces all included barrel vaulted Iwan introduced in the Parthian period but by now they reached massive proportions, particularly at Ctesiphon the royal capital. These magnificent structures fascinated architects in the centuries that followed and has always been considered as one of the most important pieces of Persian architecture. Many of the palaces contain an inner audience hall which consists, as at Firuzabad, of a chamber surmounted by a dome. The Persians solved the problem of constructing a circular dome on a square building by the squinch. This is an arch built across each corner of the square, thereby converting it into an octagon on which it is simple to place the dome.

Carving on the walls of Taq e-Bostan and Naqsh-e Rustam gives us the idea that heavy influence of Sassanian art came from their Achaemenid predecessors. These gigantic and enigmatic carvings depict the kings and nobles of the Sassanian Empire. During the “dark ages” under Khosrau II Parvez (590-628) expanded the Sassanian empire west towards Anatolia and even southern Egypt. These military exploits provided the king with enough money to create vast amounts of depictions of the king. One of the most impressive in Taq e Bostan one of the most impressive reliefs inside the largest grotto or Ivan is the gigantic equestrian figure of him mounted upon his favorite horse Shabdiz. Both horse and rider are arrayed in full battle armor. The arch rests on two columns that bear delicately carved patterns showing the tree of life or the sacred tree. Above the arch and located on two opposite sides are figures of two winged angles with diadems. Around the outer layer of the arch, a conspicuous margin has been carved, jagged with flower patterns. These patterns are also found in the official costumes of Sassanid kings. Equestrian relief panel measured on 16.08.07 approx. 7.45m across by 4.25 m high. Other carvings and figures in Taq-e-Bostan include Crowning ceremony of Shapur III and the coronation ceremony of Ardashir I of Persia.

The most amazing and interesting part of all Sassanian architecture is the famed arch of Ctesiphon the “Tāq-i Kisrā” (meaning “Iwan of Khosrau”) build during the golden age of the Sassanian empire under Anushiravan the Just (Khosrau I of Persia) after a campaign against the Byzantine Empire in 540AD.The arched Iwan hall, open on the facade side, was about 37 meters high 26 meters across and 50 meters long, the largest vault ever created, according to French traveler Pascal Coste remarked “the Romans had nothing similar or of the type!”

The arch was part of the imperial palace complex. The Throne room—presumably under or behind the arch was more than 30 m (110 ft) high and covered an area 24 m (80 ft) wide by 48 m (160 ft) long. The top of the arch is about 1 meter thick while the walls at the base are up to 7 meters thick. In order to make this possible a number of techniques were used .The bricks were laid about 18 degrees from the vertical which allowed them to be partially supported by the rear wall during construction. The quick drying cement used as mortar allowed the fresh bricks to be quickly supported by those that were previously laid.

By 640AD the Arabs invaded the Sassanian Empire and burned down the royal palace in Ctesiphon and the arch was looted and the Arabs used it as a mosque of a temporary time until the city was abandoned a sort time later. Across Iran much of the Palaces were looted and much Iranian culture and art was lost with it. The Sassanian Empire went into full decline in 651AD with the death of their last king Yazdgerd III of Persia.

Legacy and importance
The influence of Sassanid architecture reached far beyond their borders, it had a distinctive influence on Byzantine and Islamic architecture, Islamic architecture especially in places such as Baghdad for example, was based on Persian precedents such as Firouzabad in Persia. In fact, it is now known that the two designers who were hired by al-Mansur to plan the city’s design were Naubakht, a former Persian Zoroastrian, and Mashallah, a former Jew from Khorasan, Iran. The medieval Islamic domes were also based on those of the Sassanians. The best possible example is Dome of Mihrab in Tunsia and the famous Dome of the Rock were influence can be seen from both Sassanian Iran and Byzantine Rome

In Bactria (modern Afghanistan) at Bamian are ruins that show the great impact of Iranian art and architecture (especially from Sassanid era) from the 4th to the 8th century. Frescoes and colossal Buddhas adorn Bamian’s monasteries, revealing a fusion of Sassanid-Iranian and Greco-Buddhist elements within it. The Buddha’s of Bamyan contain heavy Sassanian influence such as the large arch surrounding the statues head and the style of art within it. Archeological excavations have proved that it is well possible that the Sassanian kings may have ordered part of the building or reconstruction of the Buddhas.

A profound affect occurred on Indian architecture, especially after the arrival of the Parsi population in around 660AD. The Indians began to carve giant statues of themselves into the mountains and cliffs, obviously these influences came from carving from Naqsh-e Rustam and Taq –e Bostan. One example includes murals in the Ajanta cave depicting a Hindu king with men in Sassanian dress. The arches surrounding the depiction also contain some Iranian influence. The Sassanians have had an undeniably vast influence on modern Iranian architecture one example is the Borj-e Azadi in Tehran (previously known as the Shahyād) the architect Hossein Amanat combined elements of Sassanian and Islamic architecture, the gigantic archway is based of the one in Ctesiphon. Similarly the entrance to Muze-ye Iran-e Bastan in Tehran (designed by architect