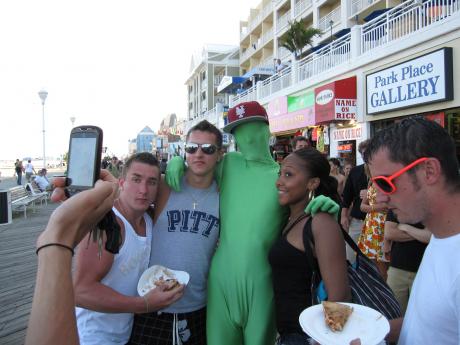 It was Islamic Republic that first coined the term Velvet Revolution for Iranians.  They were so afraid that they didn’t care what it really was or how it was carried out and under what conditions.  Islamic Republic is color blind!  Velvet, White (as in Shah’s White Revolution 😉 or Green are just different colors that they don’t know about but all have a revolutionary connotation.

Despite their scare tactics we have a Velvet Revolution going, albeit a Green Velvet!  What’s the difference?!  The cat is out of the bag!  The bed is on my foot!  I actually had a green velvet suit with matching pants and verni (shiny) shoes in the 70s!

A characteristic of this Green Velvet Revolution is that it is gathering all kinds of support from all kinds of political groups.  Everyone from M&M to Prince chubby and everyone in between are either Green now or want to use this Green movement and define it however they want.  We can see this in our own circle of family and friends.  Prior to the start of the Green movement the political discussions were routine and the younger generation didn’t even participate.

Now the 20 something club hopping boys and girls plus their parents with whatever political background are discussing what to do next.  As if the nagging about the American society was not enough now we have to argue about who should be the Green movement’s leader.  Some suggest ala the Tea party movement with no leader.  I mention about Sarah Palin as the Tea party’s de-facto leader and get stoned looks.

I even have an Ahmadi supporter in-law who claims to be Green as well.  This bunch is all crazy and from sending man to space 5 years earlier because Iran is now sanctioned to praying for gasoline sanctions, they are just all over the place.  So being Green is just the next “logical” step.

While I hardly ever agree with many of my in-laws we can now agree on something!  Yet something is just to further confuse and dilute the issues!  Isn’t that nice, no more arguing, haggling or fret over this and that.  As soon as conversations start going south bring up the Greens and let’s have a nice cup of tea or a shot of Tequila and wash down all the bitterness!

We don’t have a handful of “super Iranians” who can change the status quo.  We don’t like each other but maybe just maybe somehow we end up with an approved Velvet Revolution like the White Revolution! Some Ahmadi supporters claim they’ve already made another revolution and the only thing remaining is naming its color!