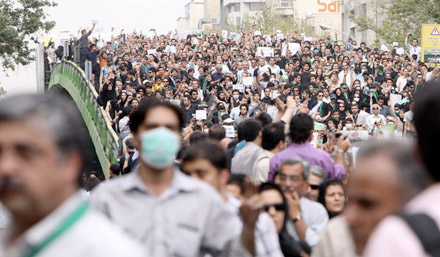 On June 10, when the Iranian opposition movement cancelled its planned commemoration of the anniversary of Mahmoud Ahmadinejad’s disputed reelection, commentators assumed that the Green Movement was finally finished. For months, it had been criticized as lacking strong leadership and for being unable to seriously challenge Iran’s entrenched regime.

But the history of political turmoil in twentieth-century Iran suggests that the movement may yet survive. After all, movements propelled by similar social currents have succeeded in dramatically changing Iran in the past.

Three periods of domestic political turbulence shook Iran in the last century — the Constitutional Revolution of 1905-11, which for a time curbed royal power and led to the development of Iran’s constitution; the Muhammed Mossadeq era of 1951-3, which temporarily ousted Mohammad Reza Shah Pahlavi; and the 1979 Islamic Revolution, which replaced the monarchy with clerical rule.

Each of these episodes was brought about by the confluence of three factors: increasing popular anger at the regime’s corruption, a rupture between the ruling and clerical classes, and dissatisfaction with Iran’s foreign relations. In each instance, two disparate camps — one secular and liberal, the other comprised of politically active (often young and mid-ranking) clergy — momentarily came together in opposition. Indeed, although periods of upheaval tend to be remembered today as being driven by iconic leaders such as Mossadeq, in the 1950s, and Ayatollah Ruhollah Khomeini, in 1979, it is important not to forget how broad and longstanding the popular movements behind them actually were.

In the early 1900s, for example, long-simmering outrage at the shah’s tyrannical behavior and humiliating trade concessions to Russia and Great Britain boiled over when the director of customs (a Belgian national) began to enforce tariffs to pay off Russian loans. Intellectuals were joined by clerics, for whom the concessions were not only an affront to Islam but also a threat to the economic interests of religious endowments. The two camps came together to demand the ouster of the shah’s prime minister and the establishment of a parliament. In the 1950s, nationalist revolutionaries campaigned to rid Iran of British control, citing the Anglo-Iranian Oil Company as a symbol of imperialist exploitation. Mossadeq spearheaded the movement but relied on Ayatollah Sayed Abol-Ghasem Kashani to rally an activist segment of the clergy. Kashani’s example may have been an inspiration to Khomeini, who, in the 1960s and 1970s, brought together an extensive coalition, including secularists, clerics, youth, and others. In demanding an end to the monarchy, Khomeini and his associates seized on widespread disgust at the shah’s coziness with Western powers and outrage over his oppressive and corrupt behavior. The coalition was galvanized by Mohammad Reza’s land reforms, which threatened the financial base of clerics and other wealthy elites.

All three opposition movements took years to consolidate before becoming powerful enough to force change on the regime. The Constitutional Revolution, which is thought of as emerging around 1905, as protests broke out over tariffs, was in fact a continuation of events that began in 1891, with the campaign to overturn an exclusive tobacco concession the shah had granted to the British.

Similarly, Mossadeq’s National Front achieved power in 1951, but this was after decades of discontent with a monarchy that had descended into disorder following World War II. The violence of this era was a longstanding family feud as well: before ousting Mohammad Reza in 1951, Mossadeq had been imprisoned by Mohammad Reza’s father — Reza Shah — for, among other things, casting a dissenting vote in the parliament in 1925 against his coronation. The Islamic Revolution of 1979, moreover, had roots going back to 1960-4, when riots against the shah swept the country and Ayatollah Khomeini and many other activists were exiled.

Each period of turmoil was distinctive but was propelled by similar undercurrents. It is a peculiar irony that in today’s campaign against Khomeini’s political heirs, the opposition movement is appealing to many of the same grievances Khomeini cited in his campaign against the shah. And indeed, the very same three factors that contributed to previous episodes of turbulence are converging again today. First, Ahmadinejad’s apparent theft of the 2009 presidential election, and the regime’s harsh repression of protests and other dissent preceding and following those elections, have fueled accusations of corruption and tyranny. This displeasure has been exacerbated by the popular perception that a privileged few — mainly elites in the Islamic Revolutionary Guard Corps — have benefited from Iran’s resource wealth while average citizens have struggled. Second, the mounting international opprobrium directed at Tehran has created a sense that the regime’s mismanagement of foreign relations is an embarrassment and harmful to Iran’s interests. Finally, the clergy appear to be dissatisfied with the government (exemplified for now less by active opposition than by the dwindling clerical representation in government and the growing number of clergy who refrain from political activism on behalf of the regime), and some of the citizenry have even accused the regime of being “un-Islamic” for its policies of repression and torture.

This movement, too, is wide-ranging. It brings together not only reformists associated with Mohammad Khatami’s more liberal government of the late 1990s but also former conservative stalwarts, such as Mir Hossein Moussavi, the movement’s leader. It also appears to be at least tacitly aligned with other hardliners, such as former President Ali Akbar Hashemi Rafsanjani, and with quiescent clergy, labor activists, students, and merchants who have grown unhappy with the regime’s economic policies. All seek to curtail corruption, restore a greater measure of civil rights to Iranians, and establish a less dangerous, more productive relationship with the outside world.

Moreover, the Green Movement is built on discontent that predates the June 2009 elections: it is the same dissatisfaction that led to Khatami’s landslide electoral victories in 1997 and 2001 and to the student protests between the late 1990s and today. Just as reform movements past were slow to build, today’s cannot be declared over because of the Green Movement’s apparent sluggishness. The mass protests following Ahmedinejad’s election have shown that regime has lost the affection of the majority of Iranians. So even as questions persist about the Green Movement’s viability, the regime’s viability is no clearer.

Yet if history gives cause for optimism regarding the opposition’s prospects for success, it also gives cause for caution. Their primary goals achieved, the coalitions leading the past century’s three reform movements quickly crumbled, riven by conflicting objectives and ideologies. After the Constitutionalists ousted the shah’s prime minister and convened a parliament, they quickly found themselves pitted against clergy advocating an Islamic state. By 1911, Russian troops had shelled and disbanded the parliament, leading clerics had been executed, and Iran was controlled by the Russians in the north and the British in the south. Two years after coming to power, the coalition led by the National Front was similarly fractured, and communist partisans were the strongest force in the streets. A U.S.- and British-organized coup soon ousted Mossadeq. And finally, in the months after the Islamic republic was established, Khomeini’s Iran plunged into bloody violence between competing factions. The regime likely only survived due to the unifying effect of the war with Iraq in 1980.

The international community should not worry that the Green Movement is doomed, but it should harbor no illusions that its success would inevitably lead to peace and democracy in the long term. Indeed, the United States and its allies should be considering not only how best to support the democratic aspirations of Iranians but also how to prepare for the real possibility of instability in Iran should the opposition prevail.

AUTHOR
Michael Singh is the Ira Weiner fellow at The Washington Institute for Near East Policy.