When a Madman Smiles at You (Carloismo Revisited) 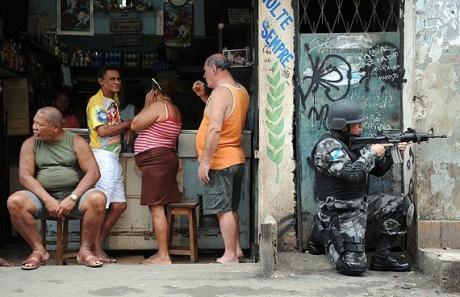 When a Madman Smiles at You (Carloismo Revisited)

Share   It was around 9:30am in Belo Horizonte, a countryside city in southeastern Brazil. I was on the bus going to Savassi, the yuppie district of town to give an English class. At a perfect point, where the thick tropical trees on both sides of the street meet to make a natural sunshade, the bus stops at a red light: a quick haven for the commuters with no AC.

I closed my eyes and inhaled. But wait. There seems to be some noise competing with the loud putt-putting of the bus engine and the earbuds of the Ipodestrians. The first thing you see is the glare from his sweaty sun-soaked skin. He stumbles next to the side of the bus as if he were a Lincoln. His crude accent yells to the bus cobrador (the guy who handles the money):‘…what up, broham! Hahaha! You workin’? I be too! Yea! Any pussycats in there? I know you know! Hahah!’ This is a fairly accurate translation, but believe, it’s a lot funnier in his jacú (hick) Brazilian-Portuguese. This is the beginning of one of Carlos’ early morning rants, and trust me he would want us to be on a first name with him by now.

Allow me to give you a snapshot silhouette of guys like him. They’re the kind of cats I love and hate to see near me in public. They walk slow, talk loud, drink like fish on the hot pavement, and couldn’t even tell you what a poverty line is. They could be white or black or both. Maybe lanky with pointy knees or small, round and curled up lips leaving a half-open face as they walk to the bus stop. The latter is the one that I saw on this sunny morning, and which gave me a story to write. He knows nothing of it. And if I told him he wouldn’t believe me.

He stumbles along the sidewalk with flip-flops. Havaianas type, but not those. They’re so dirty they’re black and so are his feet. Like he walked in gunpowder. He’s not violent though. Not at all. No reason for all that, and he wouldn’t even remember what the fight was about anyways. One thing’s for sure: he’s there. That’s what I love about him. No matter where he’s suppose to be or how late he is, he’ll always listen to you, or at least watch your mouth as you speak to him. Don’t expect any words of wisdom in the love department or with directions, just keep a safe distance and watch out for saliva projectiles.

He drinks heavily, no doubt about it. And it’s hot today, I agree. But my man here feels he must roll up his already tight, stained shirt to expose his beer belly; I mean fully. Of all the places that Carlos, feels he must share with the community, while relieving himself from the heat, it has to be that torso. About this torso; it’s not that he’s fat. In fact, his limbs are puny, and quite thin actually. It’s more that type of belly that has resulted from a lifetime of Pinga (sugarcane StrongDrink) abuse. It wouldn’t be soft to the touch, but rather hard and noisy. Like a vessel carrying ghosts of tumors, dried fat pockets, exploded kidney remains, and a train wreck of intestines. It’s like a pregnancy of beer, and hard bar which resulted in an abortion that crawled back into the womb. Carlos stands there, holding the small of his back with his left arm and drinking his Pinga from a miniature glass cup with his right. His right pinky finger daintily held in the air.

Carlos goes on ranting to the bus employees as we wait for the light to change. All of us who take that particular bus are used to his sudden arrivals. He’s famous. Everyone loves him. Everyone on the bus and in the cars that is, for we know that soon he will be inaudible because that light will turn green at any moment and we are safe behind glass and metal. The people at the adjacent bus stop aren’t so charmed by him though. They pretend not to hear him. Some are scared. Carlos is unpredictable. Plus, if he makes eye contact with you he will jump into a conversation that a normal citizen would want nothing to do with.

But Carlos’ visit on this particular morning was a bit different. While he was mumbling to the ticket operator he turned and smiled at me, but not in the way that he did with the others. It was as if he saw something very familiar in me, something he knew well. It couldn’t have lasted more than 20 or 30 seconds, but it seemed like an eternity. Then the light turned and my bus pulled away.

I forgot about it for the rest of the day, until I put myself under my cold showerhead after a soft day’s night. The way in which he looked at me that morning was hot-knifed into my mind. I felt caught by him, and by that something that he saw in me.

This event was exactly like a theme from poem by Rumi, the 13th century Persian poet, that I remembered weeks later:

When a Madman Smiles at You

Galen, the great physician, asked one of his assistants
to give him a certain medicine.
“Master, that medicine
is for crazy people! You’re far from needing that!”

Galen: “Yesterday a madman turned and smiled at me,
did his eyebrows up and down and touched my sleeve.
He wouldn’t have done that if he hadn’t recognised
in me someone congenial.”

Anyone that feels drawn,
for however short a time, to anyone else,
those two share a common consciousness.

There’s a reason why the beetle
leaves the rose garden. He can’t stand
all that loveliness.

He wants to live in rotten dung,
not with nightingales and flowers.
Watch who avoids you.
That, too, reveals your inner qualities.

The mark of eternity in Adam was not only
that the angels bowed to him,
but that Satan wouldn’t.

Only a truly mad person can see madness in others. I lay awake that night, feeling caught and deeply distributed. So, I wrote and painted all that weekend. By Monday, I felt drained and light. I finally exhaled. I thought that maybe only the ones with the right kind of eyes could truly discover that we are all somewhat mad, and with the kind of heart would be ok with it. Some like Carlos, dull and drown it with weaponized firewater and others like myself, push it out with prose, poetry and paint.

After that I spent about 2 or 3 months longer in that city and now Carlito lives in these words, and in the madman in me, I suppose. As for you my dear reader, there’s not much more you need to know about Carlos. There are some vague tangible assumptions here and there, yes, but one thing’s for sure, Carlos is here, and when his bus arrives, Carlos is gone. But where will he go, you ask? Well, I just hope it’s not the same buildings as me, for the sake of the buildings of course.